Science is often thought of as an apolitical pursuit, and yet it is inexorably intertwined with government. So we as scientists must balance maintaining our effort to be non-partisans while publicly advocating for our profession. On April 22, there will be marches and rallies around the world as “a celebration of our passion for science and a call to support and safeguard the scientific community.” These demonstrations, under the umbrella of the March for Science movement, have confronted us with an unprecedented opportunity to have a national discussion about how science and policy intersect.

This movement started with a post on Reddit on the day of the presidential inauguration calling for a scientists’ march on Washington, DC. Three days later a dedicated Facebook group was made and within the week a subreddit brought together the organizers for satellite marches in sister cities on a common Slack group. As of today, there are 428 marches planned in 44 countries and every U.S. state. On February 24, the American Society for Cell Biology (ASCB) was one of the first scientific societies to officially partner with the national March for Science rally and teach-in in Washington, DC.

“It started to take off on Facebook, explained Kevin Wilson, Director of Public Policy and Media Relations for ASCB. “Erika Shugart (ASCB’s executive director) and I saw it, and it was obvious to us that this was something ASCB had to do. It’s better for us as an organization to be part of this, and to all do our best to make sure it’s as successful as possible, than to sit back.”

The public’s trust in science has eroded for a while. One of the key goals of the March is to rebuild, bolster, and reestablish that trust. I asked Kristen Ratan, the Lead Organizer of the San Francisco satellite March for Science why we now need a March for Science.

“Scientists have enormous challenges to face in a normal year with normal support for science and normal budgetary limitations,” Ratan said. “So in a constrained environment such as the one we may be facing today with fewer budget dollars, and less public interest in support for science, those challenges are much greater.”

Wilson adds that for publically funded scientists, like most ASCB members, the mandate to advocate for science is greatest.

“It’s a responsibility for everyone from the graduate student to the senior PI to explain to the American public how they are using their money, and the best way you can do that is to explain your science,” Wilson said.

Proposed cuts to federal support of science “to help focus resources on the highest-priority research and training activities” will restrict the already limited diversity of topics researchers can pursue and diversity of the scientific workforce. March for Science asserts, “We recognize that a diverse and inclusive scientific community asks a broader range of questions and rewards us with a greater understanding of our world.”

March for Science has been heavily criticized for its occasionally simplistic stance on diversity in addition to several highly visible gaffes. However, the movement has evolved its statement on diversity in response to criticism from the community. Though the conversation about diversity and intersectionality sparked by the March has been uncomfortable, developing a set of diversity principles for science has been a worthwhile pursuit. It is critical that we now use this momentum safeguard our vibrant scientific community and keep working to make it even more equitable, accessible, and inclusive.

ASCB continually advocates for science and scientists, but as Wilson explained, “If all the ASCB members said, ‘We’re going to stay in our lab, and Kevin, it’s your responsibility to make sure we get increases in funding every year,’ then it’s not going to happen, because no person can do it alone.”

Postdocs and graduate students are the boots on the ground that experience the reward and struggle of doing science every day. We are uniquely suited to communicate our experiences with others so they may understand our goals and empathize with our concerns.

Whether we share our experience in science publicly by attending the national or satellite marches, or advocate for science on a smaller scale by explaining to our friends and family why our work is interesting and important, we all have a part to play. Some labs, companies, and employers will fully support participation in the March for Science movement and may march together as a contingent, while others may see it as a luxury that people must do on their own time. Each of us should gauge for ourselves the level at which we can commit time to the March and determine what form our advocacy will take. 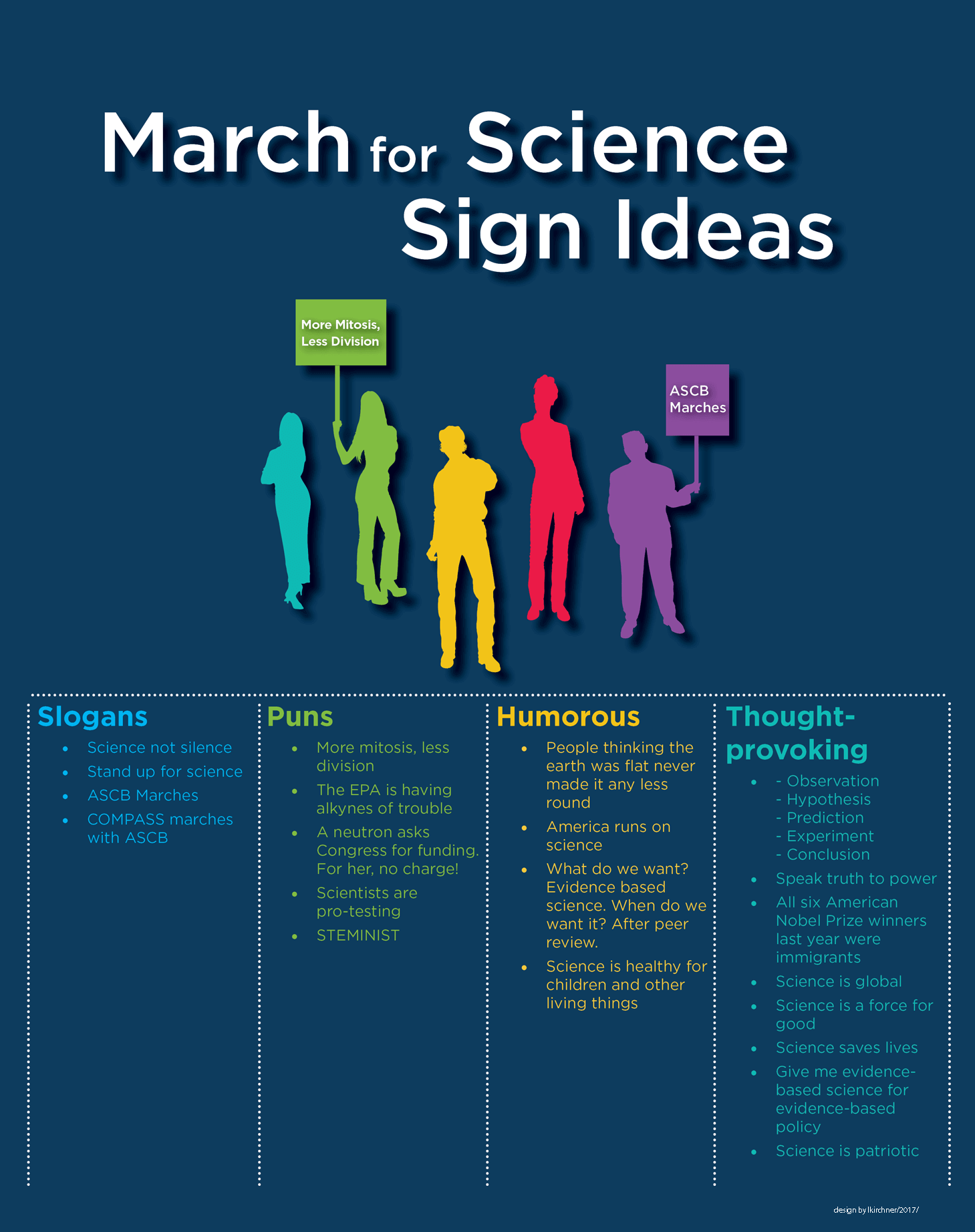 I spoke with graduate student Robin Lopez (Lawrence Berkeley National Laboratory) and postdoc Bryan Dunyak (UC San Francisco), members of the steering committee for March for Science SF, about how they chose to be part of the March and what they bring to the table as early career scientists. Both Lopez and Dunyak describe feeling a responsibility to join the March, despite initial concerns that associating their names and careers with the movement might have negative consequences, including harassment online.

Some have voiced concerns that political action undermines scientific integrity. Especially for junior scientists, there is a strong pressure to focus myopically on research alone. When asked whether they talked about their advocacy work with their colleagues, Dunyak told me, “I don’t have any reservations about talking about it, it’s just something that I do, and I don’t really advertise it all that much.” Lopez was similarly conservative about discussing his advocacy work in the lab, but emphasized that when he did discuss his work, “it’s been nothing but positive feedback.”

Even Lopez and Dunyak, arguably some of the most assertive and forward-thinking, early-career science advocates, still feel trepidation about their activism. However, they acknowledge that through their advocacy work, they have established a strong pride and sense of belonging in the research community. Both are strongly involved with social media, and credit these newer platforms with helping break down stereotypes about scientists and educate the public about science.

“There’s a lot of energy that can be brought forth,” Lopez said. “[We have] new ways of thinking and new assessments of what’s happened in the past and what hasn’t gone well.”

“You have to take hold of your own future, and I feel this is really important for early-career scientists,” she said. “There are many things to fear as an early career scientist. There’s a lot to navigate. Marching on behalf of science should not be one of those things.”

We have to strongly believe our message and stand up for our peers who may have the same story, but have a lot more to lose. If someone doesn’t speak first, then there is no community to rally around. And because demonstrations rely on power in numbers to amplify a collective voice, high attendance at the March is essential for achieving its goals.

ASCB is focusing primarily on supporting attendees at March for Science in Washington, DC. There will be room- and ride-share programs, poster-making events, and an organized physical presence at the March. They also hope to support members at satellite marches, but given the decentralized organization of the movement, they, like the March organizers, are largely building this as they go. Though the satellite marches’ organizers liaise with the central March to present a cohesive message, they also aim to emphasize specific issues as it pertains to their city. “You might find the satellite marches to be a bit more—spicy,” Wilson said.

For information about ASCB’s participation in the March for Science and to find out about some of the support they will be providing attendees, visit http://marchforscience.ascb.org/. Track us at the March on Twitter with the hashtag #ASCBmarches, or RSVP to the Facebook event page ASCB Marches for Science 2017. Also, stay tuned for future COMPASS blog posts for resources and advice about getting involved if you are not a U.S. citizen.

Finally, as we each find our voices in this accelerating national discussion around science, we must remember that the March for Science marks the beginning of a movement. The March has created a powerful coalition of scientists and science enthusiasts that never existed before. Many in the movement aspire to form a permanent advocacy group that will continue to promote science. Achieving the March’s goals to “Humanize science, partner with the public, advocate for open, inclusive, and accessible science, support scientists, and affirm science as a democratic value” will require lasting engagement, and ASCB is committed to supporting its members in that effort. As always, ASCB members can find advocacy tools and policy statements at https://www.ascb.org/advocacy/, with new initiatives taking shape every day.

If you choose to march, speak your voice in a way that shows logic and rational thought, but also let your youth and enthusiasm shine through. Humor can open up difficult conversations, but it’s critically important that our messages about this be positive. Scientists are very creative people, and hopefully we can harness that creativity.

With this advice in mind, COMPASS has collected some of our favorite poster taglines in support of science. Check them out in this handy infographic created by ASCB’s Production Coordinator Leeann Kirchner. How will you be participating in the March for Science? Leave your comments below!

Kate Carbone is a Ph.D. student in Ron Vale’s lab at University of California, San Francisco investigating the spatial organization of T cell signaling. Kate co-organized the ‘Bay Area Meeting for Lymphocyte Cell Biology’ in Oct 2015, and has been a COMPASS member since Jan 2017. She can be reached via email (catherine.carbone@ucsf.edu) or Twitter (@mKate)