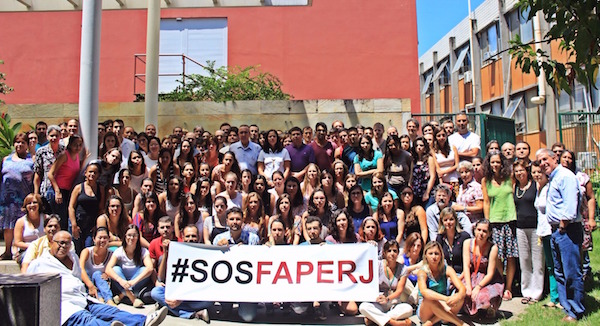 Faculty, staff and students from the Biophysics Institute of the Federal University of Rio de Janeiro are asking for help using the hashtag #SOSFAPERJ

“The tumor had given a first hint of its existence in St. Louis, but it was in Rio de Janeiro that it revealed itself, and it did so in a theatrical and grand way, as if spurred by the bright atmosphere of that explosive and exuberant manifestation of life that is the Carnival in Rio,”

The author of this statement was Rita Levi-Montalcini, who together with Stanley Cohen won the 1986 Nobel Prize for describing growth factors. Levi-Montalcini did part of her work describing the neural growth factor at the Biophysics Institute at the Federal University of Rio de Janeiro. This is just one example of the great science performed in Rio de Janeiro state, including recent internationally hailed work on the Zika virus. Twenty percent of Brazil’s scientific production is based in Rio de Janeiro. However, the quality of science in Rio de Janeiro is in serious jeopardy. This week the state assembly will vote on cutting the state’s funding of science in half.

Science funding in Rio de Janeiro comes mainly from federal and state agencies. Since the recent economic crisis in Brazil federal funding has been falling short, forcing labs relying on state funds to cut back on reagents and equipment as well as fellowships for grad students and postdocs (some of them ASCB members). Delays in paying grants and stipends are already frequent, and further budget cuts will significantly reduce the number of students and postdocs.

Zika virus research, which has become a critical health issue in Brazil, could come to a stop due to these budget cuts. Meanwhile, resources are still flowing to support the 2016 Olympic games. Scientists have nothing against the Olympic games but fear that the state governor who is pushing this budget cut proposal has no concept of the future impacts. It will take years, maybe decades, for Brazilian scientists to recover from this disastrous policy. Researchers are already starting to leave Rio and Brazil for better study opportunities and the chance to perform high-level science.

In Rio, faculty, students, and postdocs are denouncing the impending calamity of the budgetary cuts with a #SOSFAPERJ campaign. FAPERJ is the Rio de Janeiro state research foundation, which will potentially lose 50% of its budget. I appeal to all scientists and all who value science around the world to use this hashtag on March 16, the day that the state assembly will vote. Let’s hope common sense prevails and Rio de Janeiro keeps its tradition of being known for beautiful landscapes, amazing music, and wonderful science.

For more background on the Brazilian science funding crisis, see this report from the Royal Society of Chemistry.

Bruno Da Rocha-Azevedo is a Senior Staff Scientist in the Department of Biophysics at UT Southwestern Medical Center. Bruno studies the spatiotemporal dynamics of endothelial cell receptors using single molecule imaging. He was one of the founding members of COMPASS, and co-chair during 2015-2016. Bruno was the founder and co-chair of the Task Force on LGBTQ+ Diversity and currently is a member. Bruno also volunteered on the ASCB 5-year strategic plan, helping on creating the guidelines for further democratizing the society by ensuring leadership and decision making reflect the broad range of the membership and their interests and priorities E-mail: brunodarochaazevedo@gmail.com Twitter: @brunodra Christina Szalinski is a science writer with a PhD in Cell Biology from the University of Pittsburgh.