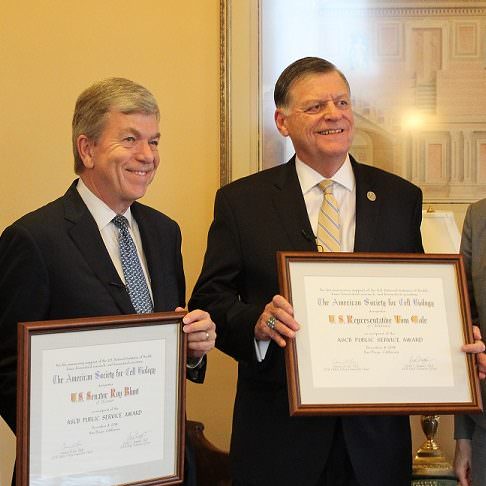 The location of the meeting was in an out-of-the-way private office at the end of corridors not on the public tours of the Capitol. In fact, the Senate staff member serving as escort had never been to the room before and was not sure of its location. 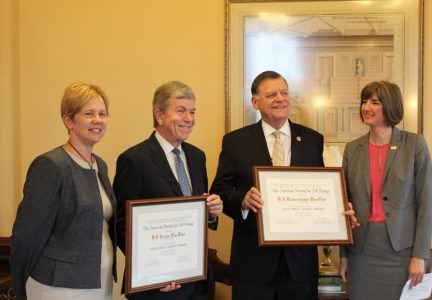 In the U.S. Capitol, private offices, called Hideaways in Washington, are reserved for senior Senators; more senior members are able to select hideaway offices with better views, better location, and even historical significance. This office was originally home to the Senate Appropriations Committee.

ASCB CEO Erika Shugart and Public Policy Committee chair Connie Lee made their way to the hideaway, located across the hall from the Senate chamber and with a stellar view of the National Mall, to present the ASCB’s highest award for public service to Senator Roy Blunt (R-Mo) and Representative Tom Cole (R-OK).

The ASCB has presented the Public Service Award since 1994 to scientists who have led the way as science policy advocates or to nonscientists who have who have been champions for basic science or science issues important to the ASCB community.

“Since Cole and Blunt became chairs of the House and Senate Subcommittee on Labor, Health & Human Services and Education Appropriations Subcommittee, respectively, they have overseen significant increases in funding for the NIH—from just over $30 billion in 2015 to just under $40 billion in the FY2019 NIH budget recently passed by Congress,” stated Shugart who, along with Lee, presented the members of Congress with the award on Capitol Hill. “The five-year period of Blunt and Cole has also seen a remarkable increase in the support among other members of the House and Senate. Now, when scientists come to Congress for meetings, they are met with strong support from their representatives.”

In their remarks, both Blunt and Cole referred to the important work done by NIH-funded researchers and the huge health care costs looming in the nation’s future as reasons for their support. Cole offered that support for the NIH was one of only three areas of funding within the appropriations bill his politically diverse committee members all agreed were priorities.

A video of highlights of the presentation ceremony will be shown at the start of the keynote lecture during the 2018 ASCB|EMBO Meeting this coming December in San Diego.