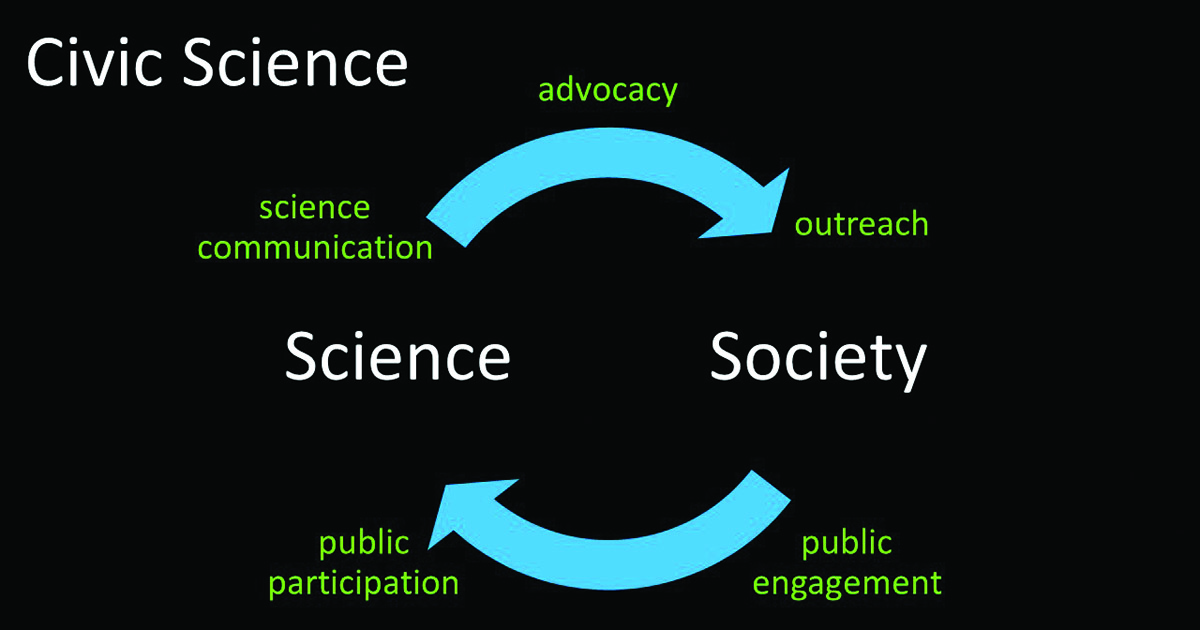 Many of the most complex and important problems we face—from climate change to antibiotic resistance to gene editing—require scientists to work with diverse stakeholders to find, discuss, and implement scientific insights and solutions. When these science–society relationships are strong, we see increased public interest in and support for science, the uptake of scientifically sound practices and policies, and the promise of a diverse and competent scientific workforce for years to come. Fortunately, many scientists already recognize the importance of engaging with diverse audiences, as evidenced by their commitment to science communication, advocacy, outreach, and public engagement. These activities contribute to a culture of “civic science,” in which scientists are active citizens and create opportunities for all members of the public to engage with science.

As the linchpins of the scientific enterprise, scientific societies have a key role to play in cultivating a culture of civic science. Recognizing a need, the Kavli Foundation has provided funding for scientific societies to collaborate to advance their collective support of scientists’ civic science efforts. ASCB is leading this work—the Society Civic Science Initiative—in partnership with the American Association for the Advancement of Science (AAAS), American Geophysical Union (AGU), and Research!America. Since the initiative was launched in the fall of 2019, a total of 55 organizations have become involved in varying capacities.

Through this initiative, we are laying the groundwork for more cohesive efforts among societies, as we work toward influencing long-term culture change within the scientific enterprise to increase value and support for meaningful civic science engagement. To this end, we started by examining scientific societies’ current civic science efforts by documenting common ways that organizations aim to equip, empower, and reward scientists who engage with broad audiences (the full report is available at www.informalscience.org/scientific-society-civic-science-landscape). This landscape assessment provided insights into key opportunities for scientific societies to make a greater collective impact in this area. From there, the group developed a collective vision and goals, which include:

Most recently, staff from a wide range of societies convened to kick off specific projects toward those shared goals. For example, one group is developing materials to help make the case for the importance of civic science, another is focused on establishing channels for society staff to learn from each other, and additional committees are assembling resources on engaging with specific audiences, namely local policymakers and community groups. As these projects expand and gain momentum, we will continue to monitor and measure our progress and seek ways to connect scientific societies’ civic science efforts with relevant social science research, diverse practitioner expertise, and other emerging efforts (for examples, see more on civic science from the Rita Allen Foundation: http://ritaallen.org/civic-science).

We are optimistic that this new collaboration will create valuable opportunities for ASCB to advance a culture of civic science, in which societal needs and diverse perspectives shape science, and scientific discoveries inform public understanding, decisions, and policies.