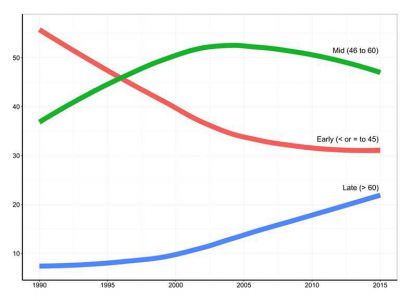 Soon after the U.S. National Institutes of Health (NIH) announced the creation of the Grant Support Index (GSI) in May 2017, the ASCB Executive Committee asked the Public Policy Committee (PPC) to review the new proposal and provide them with a position paper. The GSI would have limited the amount of NIH support given to any individual investigator.

n and request for feedback, the NIH made the decision to abandon the GSI program and instead implement the Next Generation Researchers Initiative (NGRI). Unlike the GSI, this program would not limit total NIH support for any single investigator but instead aims to target funds towards investigators that are perceived to be most at risk of being unable to continue their research careers for lack of funding—those with 10 years or less of NIH Research Project grant support. The source of funds for the NGRI was not immediately clear.

The ASCB has members from all career stages, which made it challenging for the PPC to identify recommendations that addressed the needs of all members. During its work, the PPC solicited a series of opinion pieces from four members interested in solutions to the current imbalance and provided all ASCB members with the opportunity to also share their comments. You can read these opinion pieces at (https://www.ascb.org/ascb-post/science-policy/opinions-on-the-gsi).

GSI and the NGRI were also topics of discussion at the December ASCB Council meeting and at a number of ASCB Executive Committee and Council conference calls and PPC calls and meetings.

The ASCB Executive Committee has approved a letter to be sent to the NGRI Working Group, a portion of the Advisory Committee to the NIH Director (ACD). The letter outlines basic principles that the ASCB hopes will guide the work of the NGRI Working Group. In addition, ASCB’s letter offers suggestions to address current imbalance issues, including a separate review system based on career stage, and limitations on lab sizes.

You can read the letter here.