A type IV pilus is a bacterial grappling hook and one of the snazziest pieces of bacterial cell machinery going. The pilus is created by a type IV pilus machine (T4PM) that pushes out a pilus thread, grabs a substrate, and, hauling back the thread, drags the bacterium forward. Seen by conventional light microscopy, Myxococcus bacteria glide along effortlessly like coaches being pulled by teams of transmembrane protein machines. Seen close up, the interior of a T4PM is equally fascinating. Grant Jensen who is at the California Institute of Technology took that closer look through electron cryotomography (ECT), one of three emerging cryo-electron microscopy (cryo-EM) methods which Jensen believes will transform structural biology. All three will be presented by Jensen at ASCB 2016 workshop, entitled, “Cryo-EM: What It Can Do Now and How You Could Get Started,” on December 5 in San Francisco.

In the workshop, Jensen, who is also a Howard Hughes Medical Institute investigator, will cover all three of the new cryo-EM approaches—cryo-electron tomography, single particle reconstruction, and micro-electron diffraction. The advantages are clear, he says. These cryo-EM techniques can capture images of proteins at work at far higher resolution than light microscopy or with smaller crystals than X-ray crystallography. 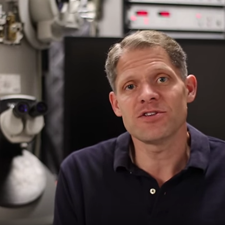 Grant Jensen’s video on getting started in cryo-EM has had over 13,000 hits on YouTube.

The T4PM study is an example of what these new super cold imaging techniques can do, although Jensen says that the pilus work was almost a happy accident. “We were imaging a bacterial species, Myxococcus xanthus, for different reasons actually. In the process of imaging it, we produced these really great pictures of the machine that makes the pilus, that extends the pilus and retracts it.” By averaging together thousands of ECT images, the researchers assembled a reconstruction of a T4PM at 3-4 nanometer scale.

Jensen sought out someone with a special interest in the T4PM structure in M. xanthus and found Lotte Søgaard-Andersen at the Max Planck Institute for Terrestrial Microbiology in Marburg, Germany and her impressive library of M. xanthus mutants. Using Søgaard-Andersen’s mutants, Yi-Wei Chang, a research scientist in Jensen’s Caltech lab, used ECT to map missing or tagged pieces from the mutants and build a working model of the T4PM in action.

“It’s a machine that has 10 pieces,” Jensen explains.  “The pieces were identified and their individual structures determined a while ago, but cryo tomography showed us how they fit together and that led us to new ideas of how they work.” All of the parts came together in a paper capped with a scientific animation of the hypothetical T4PM model by Janet Iwasa of the University of Utah.

All three cryo-EM techniques start from the same point. You freeze a sample on a grid and keep it cold in the EM, says Jensen. “Having them very cold allows us to place them into the high vacuum of an electron microscope without the water just vaporizing.” But each technique offers special advantages, Jensen explains. ECT is able to image large, intact macromolecular complexes in their native state inside cells. Single particle analysis cryo-EM gets around the difficulty of growing crystals of proteins larger than 100 kilodaltons.  “You purify thousands of copies of the protein. And then you take pictures of them, thousands of them. We can merge the images to produce an average image that can reveal where all the atoms are. You can solve the structure of a large protein without getting it to crystallize.” Electron diffraction cryo-EM works at the other end of the protein spectrum with small proteins. All three techniques are cheaper than classic X-ray crystallography, if a synchrotron is used to produce the X-rays.

Jensen believes that cryo-EM is on the verge of a breakout. Facilities are relatively rare now but NIH has been following developments closely and contemplating the establishment of national cryo-EM centers. Several large research universities and institutes are costing out the equipment, facilities, and faculty requirement to set up their own.

Meantime, spreading the word on cryo-EM has become a cause for Jensen. Last year, he posted an introductory cryo-EM video course on his lab site. On YouTube, the course has had over 13,000 views. At his ASCB 2016 cryo-EM workshop, Jensen hopes to reel inmore of the curious and the eager-to-try, all without the use of a pilus.