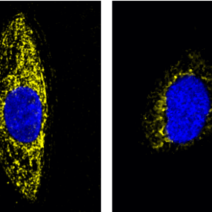 Researchers constantly search for promising ways to thwart the spread of cancer, especially ways that can reduce chemo-resistance. Often, however, the mechanisms cancer cells harness for chemo-resistance are important to processes in healthy cells, too.

As part of the capstone of his doctoral work at the University of the Sciences in Philadelphia, Norman Fultang focused on an upstream regulator for a gene found in both healthy and cancerous cells. What’s special about the regulator is that in healthy cells, it’s mostly found only in embryonic or fetal tissue. The ROR1 oncofetal regulator controls the ABCB1 gene.

“ABCB1 and other drug efflux pumps mostly function in shuttling a wide range of molecules across the cell membrane,” Fultang said. “Anything from steroids to lipids, phospholipids, cytokines, and many more. These make them very valuable to normal cell physiology, [but they present] a particular difficulty when targeting them clinically for cancer treatment.”

So since ABCB1 genes are found in both cancerous and normal tissue, Fultang looked upstream for a target. “The beautiful thing about oncofetal receptors like ROR1 is that they are mostly cancer-specific, making them valuable clinical targets,” Fultang said.

In addition, ROR1 is not commonly expressed in healthy adult cells.

“The ROR proteins are highly expressed during development,” he said. “They regulate processes from neurite growth to skeletal and cardiorespiratory development. High expression of ROR1 is typically observed during the embryonic and fetal developmental stages, but levels are minimal in more mature tissue, although there is some ROR1 expression in adult pancreatic, lung, and neural tissue.”

By inhibiting the oncofetal regulator ROR1 using previously established methods, he and his colleagues circumvented the potential ill effects to normal cells that might have occurred by knocking down the ABCB1 gene directly.

“We anticipate this would mitigate some of the negative effects of ABCB1 disruption in normal tissue. ROR1 inhibition itself has been widely studied, with relative success, as an approach for a variety of solid and hematologic malignancies,” he said.

One of the most difficult aspects of this research, Fultang said, was finding the “mechanistic link between ROR1, a cell surface receptor, and disruption of ABCB1 on a transcriptional level. In doing so, we identified an increase in tumor suppressor p53 activity as a result of ROR1 disruption, which is always great news for cancer therapy. We got lucky because p53 is a huge transcriptional regulator of ABCB1.”

Fultang has accepted a postdoctoral position doing immuno-oncology work at the University of Pennsylvania. “I will keep pursuing cancer-specific targets like ROR1, but will also study immuno-regulatory elements that so often impede cancer therapy.” And Fultang, who is Black, added that although no one close to him has suffered from breast cancer, “Breast cancer disproportionately affects women of African descent, so I have a personal stake in studying it and contributing to the effort.”