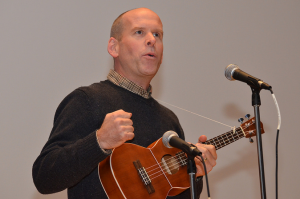 It came down to a one-joke showdown. The Zombie CellSlam, ASCB’s juried stand-up, science slam, back from the Undead for the ASCB/IFCB 2014 meeting in Philadelphia, went to a tie-breaker challenge—“Say something funny about GFP.” The judges, including Nobel laureate Marty Chalfie and NIH Director of the National Institute for General Medical Sciences (NIGMS) Jon Lorsch, had already heard a mini-talk on the cell biology of vampires, a cytoskeletal send-up of a Beach Boys hit, a stark tale of post-postdoctoral life raising money on Kickstarter, and a microtubule ballad based on a Disney song. In the end, the showdown and the $1,000 top prize went to Will Hancock of Pennsylvania State University who triumphed by ad-libbing a stanza from a GFP love song.

The judges, led by Public Information Committee (PIC) chair Simon Atkinson and joined by Science News correspondent Tina Saey, had deadlocked. They’d winnowed the five contestants down to the top three when Chalfie suggested the “funny” GFP tie-breaker, probably because he’d taken schtick all evening about his 2008 “GFP” Nobel from Zombie CellSlam emcee, Randy Hampton (a.k.a. Randolph Hampton, Professor of Cell and Developmental Biology, University of California, San Diego). Hampton had speculated on whether Chalfie wore his Nobel medal around the house. “I would,” Hampton declared, dropping into a Nobel-around-the-neck-walking-around-the-house slouch. Chalfie countered that the actual medal didn’t have a ribbon. This did not deter Hampton, who imagined Mrs. Chalfie getting fed up with their GFP-green painted apartment. Hampton also badgered NIGMS Director Lorsch into outlawing on the spot the phrase, “interrogation,” as in “interrogating proteins,” from all future R01 proposals as unsuitable language. 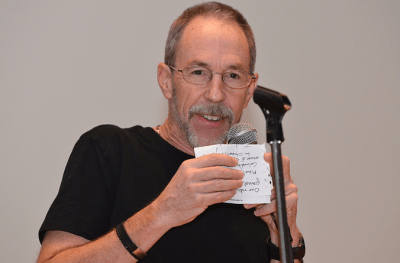 The evening began with Hancock, accompanying himself on the ukulele, singing “I wish they all could be microtubules” to the tune of the Beach Boys’ “I wish they all could be California girls.” The boisterous crowd of about 350 quickly joined in on the chorus. Nathan Pierce of Stanford opened with a voice-of-doom movie trailer for a yet-to-be-made superresolution thriller and before launching into the Eagles’ “Hotel California” twisted into “Hotel ASCB.” Elisa Vitiello from the University of Grenoble in France speculated on how the EV superfamily of proteins might be behind vampire out-of-the-cytosol cell biology. Melanie Stegman of Molecular Jig Games, described launching her startup’s educational video game, “Immune Defense,” on Kickstarter after her NIH science education research grant ran out. Stan Cohn, the reigning CellSlam champ since 2009, when a weary PIC decided to put the contest on an indeterminate sabbatical, brought down the house with a Disney hit song from “Frozen,” adapted for kinases, plus ends, and mitotic spindles that featured the refrain, “Let ‘em grow. Let ‘em grow. The warmth never bothered me anyway.”

There is no official video of the Zombie CellSlam, as the cost and the propriety were daunting. You had to be there, all who were there agreed at the evening’s end.