Science Highlights from ASCB 2013: Membranes, Nano-magnets, and the Errant Protein Behind a Cerebellar Disorder 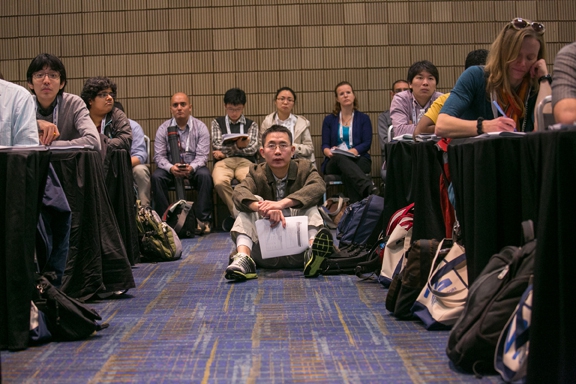 Modeling membranes, nano-magnets to control cell activity, and a gain-of-function protein behind a severe progressive brainstem disorder were hot topics at the 2013 ASCB Annual Meeting in New Orleans, December 14-18. This year, ASCB continued the tradition of weaving two scientific threads—biophysics and medicine—through many of the 254 science presentations. 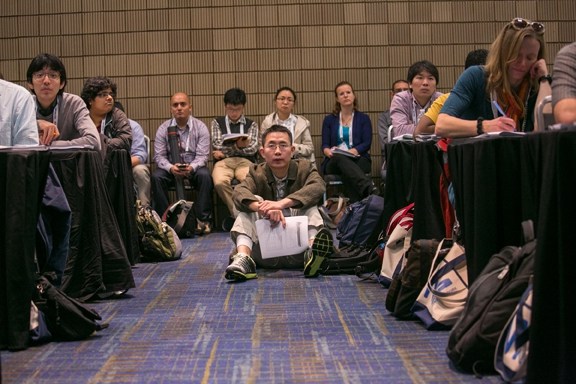 Catching the hot science sessions at the ASCB Annual Meeting
requires planning, networking, and, if you got there a little late, stamina.
The reward? Next year’s science this year.
Photo credit: ASCBModeling membranes, nano-magnets to control cell activity, and a gain-of-function protein behind a severe progressive brainstem disorder were hot topics at the 2013 ASCB Annual Meeting in New Orleans, December 14-18. This year, ASCB continued the tradition of weaving two scientific threads—biophysics and medicine—through many of the 254 science presentations.

Kicking off the biophysics thread was the Saturday special interest subgroup called “Building the Cell.” Among the presenters was bioengineer Dan Fletcher of the University of California, Berkeley, who described new work on reconstituting cell membranes. When starting the project, Fletcher said that he wanted to know, “How does the size of the molecule influence its ability to segregate at membrane interfaces?”

To answer the question, Fletcher and colleagues made a model of membrane interfaces with giant uni-lamellar vesicles and various synthetic proteins of different sizes. They found that exclusion of proteins at interfaces is size dependent and does not require active help from the cell. This exclusion is important for cell processes like T-cell activation, Fletcher believes, where adhesion molecules with large extracellular domains are excluded from regions where ligand-receptor pairs interact.

Later on Saturday at the “Molecular Sensors and Actuators” special interest subgroup, Mathieu Coppey at the Institut Curie in Paris explained how his lab deployed “nano-magnets,” super-paramagnetic nanoparticles coated with signaling proteins, inside cells. The researchers then used a larger magnet outside the cell to localize the nano-magnets to specific subcellular locations and observe the effects.

The coated nano-magnets were able to function as signaling platforms, with effects specific to the location of the magnet. For example, one protein that they attached to the nano-magnets (GEF TIAM1) was able to activate downstream proteins at the plasma membrane. However, when they brought that same protein-coated nano-magnet to the leading edge of migrating cells, it promoted signaling that led to the formation of actin scaffolds near the magnet. Coppey said that the work demonstrated that signal transduction is really compartmentalized in the cell. “We expected that the signal would spread but everything that we activated stayed local… that was a big surprise.”

P-granules were the focus Monday at the “Physical Biology of the Cell” symposium where Frank Jülicher, director of the Max Plank Institute for the Physics of Complex Systems in Dresden, spoke about the special organization of the cell cytoplasm by phase separation. P-granules are non-membrane-bound assemblies of proteins and RNA, lipid drops that Jülicher compared to vinegar in an oil emulsion. Because they act like an emulsion, the granules undergo Ostwald ripening: Two equal-sized lipid drops are unstable, the non-homogeneous sizes are driven by tension of smaller droplets compared with larger ones.

At the “Emerging Technologies” workshop on Tuesday, Feng Zhang described using yogurt bacteria to edit the genome with CRISPR size-specific nucleases. CRISPR is an anti-phage defense used by yogurt bacteria, Streptococcus thermophilis. In 2011, Feng Zhang’s lab tried to modify CRIPSR for genome editing. They were able to optimize CRISPR design, and now researchers can access all of Zhang’s CRISPR reagents at Addgene.

On the medicine thread for Sunday was Huda Zoghbi of the Baylor College of Medicine, who presented her pioneering research at the “Frontier Symposium in Cell Biology and Medicine” on Spinocerebellar Ataxia 1 (SCA1), a progressive brainstem and ataxia dysfunction that her lab has been studying since 1993. More recently, her lab demonstrated that SCA1 pathogenesis is caused by a gain-of-function mechanism in the protein ataxin-1 and that reducing ataxin-1 slowed the disease pathology. Zoghbi’s findings indicated that phosphorylation at position S776 was a potential therapeutic target.

In following up, Zoghbi described how her lab was able to demonstrate that ataxin-1 amyloid oligomers correlated with disease progression. Additionally the researchers found that these mutant ataxin-1 oligomers propagate, although it’s not yet clear how that spreading correlates with a disease phenotype. However, targeting these ataxin-1 oligomers with passive immunotherapy rescued motor defects in mice with a phenotype.

Speaking on Tuesday at the “Tumor Microenvironment as a Driver and Target in Cancer Progression” session, Johanna Joyce, a cancer biologist at Memorial Sloan-Kettering Cancer Center, said that in looking for an alternative strategy, her lab turned to non-tumor cells that are part of the glioma microenvironment, the cancer’s cellular neighbors. In particular, her lab zeroed in on tumor-associated macrophages (TAMs). TAMs are normally the brain’s front-line immune cells, and depend on colony-stimulating factor-1 (CSF-1) for differentiation and survival. When the Joyce lab used an inhibitor of the CSF-1 receptor to target TAMs in a mouse model of glioblastoma multiform, the treated mice survived many months beyond the control cohort.

At the final minisymposium in the medicine thread on Wednesday, Sarah Hymowitz of Genentech showed how the BRAF-MEK complex reveals diverse mechanisms of pathway dysregulation. Growth factor receptor pathways drive many cancers, she said. The BRAF V600E mutation is found in more than 60% of melanomas, and promotes MEK signaling. BRAF and MEK form a stable complex in vitro, and Hymowitz and colleagues determined the crystal structure of the complex. They then used confirmation-specific BRAF inhibitors and showed that the interaction between BRAF and MEK can lead to changes in pathway activation.

At the same session, Mikala Egeblad from Cold Spring Harbor Laboratory told the “Cancer Cell Biology” session how extracellular neutrophil traps capture and kill bacteria in extracellular space. Egeblad described how metastatic tumor cells can recruit neutrophils and trigger neutrophils in their vicinity to “cast” neutrophil extracellular traps (NETs). And this, she found, enhances the ability of tumors to invade and spread through the activity of the digestive enzymes in the NETs. Most intriguingly, her team used an enzyme called DNase to digest the DNA scaffold of the NETs cast by neutrophils. The effect was to reduce the ability of the tumor cells to form metastases in mice. Since DNase was shown in animals to counter this metastasis, there is the prospect, says Egeblad, that the enzyme might have a role in human cancer therapy.