The Editorial Board of Molecular Biology of the Cell has highlighted the following articles from the September 2016 issues. From among the many fine articles in the journal, the Board 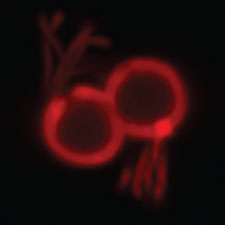 The internalization of macromolecules from the extracellular environment is critical for the normal growth and development of all cells. Components of the endocytic machinery direct this process and must bind and bend the relatively flat surface of the cell to generate highly curved transport carriers. In this image, tubulation of synthetic liposomes is observed upon incubation with a new membrane binding and bending module, the EH domain of the endocytic scaffolding protein Eps15. Wang et al. (Mol. Biol. Cell 27, 2675–2687) demonstrate that membrane bending mediated by Eps15 functions in concert with another factor, Fcho1, to initially sculpt endocytic transport carriers. (Image: Michael Hanna and Anjon Audhya, University of Wisconsin, Madison)

selects for these Highlights articles that are of broad interest and significantly advance knowledge or provide new concepts or approaches that extend our understanding. 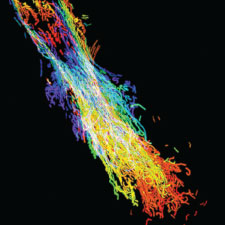 Cell migration involves complex coordination of localized biochemical processes, many of which are energy-expensive. Shown is a color-coded image of mitochondrial flux in an ovarian cancer cell expressing a fluorescent mitochondrial marker as the cell migrates through a three-dimensional extracellular matrix. To make the image, each frame of a time-lapse live-cell movie was assigned a different hue on the color spectrum from indigo (first time point) to red (last time point), and these images were overlaid to illustrate the infiltration of mitochondria into the invasive leading edge. Cunniff, McKenzie, et al. (Mol. Biol. Cell 27, 2662–2674) detail this mitochondrial flux and show that it is controlled by localized activation of a signaling pathway that senses subcellular changes in energy status. These observations couple localized cellular energy demand to the subcellular targeting of mitochondria during cell movement. (Image: Alan K. Howe, University of Vermont)

Interaction of Gcn4 with target gene chromatin is modulated by proteasome function
Gregory C. Howard and William P. Tansey
The yeast transcription factor Gcn4 requires a ubiquitin ligase and the proteasome to function. Inhibiting proteasome function prevents the interaction of Gcn4 with target gene chromatin, and this activity is suppressed by inactivation of the ubiquitin-selective chaperone Cdc48. Thus proteolysis of Gcn4 is not required for its function.
Mol. Biol. Cell 27 (17), 2735–2741