Molecular Biology of the Cell (MBoC) is a venue for reports of advances in the field of cell biology and is one of the services that the ASCB offers to its members and to cell biologists throughout the world. It offers rapid, fair, and constructive handling and review of manuscripts entirely by working scientists who are experts in their fields.

Like ASCB itself, MBoC has moved in recent years to embrace research at the intersection of cell biology and the physical and computational sciences. We have done this by adding new expertise to the Editorial Board and by publishing special issues on Quantitative Cell Biology. The first two special issues were very well received and include some extraordinarily good research reports and Perspectives. A third special issue will be published in November 2016, and the journal has released a call for papers. Eventually such special issues may become unnecessary as physical and computational methods become integrated into mainstream cell biology, but now there is clearly a need for a venue to showcase this type of work. 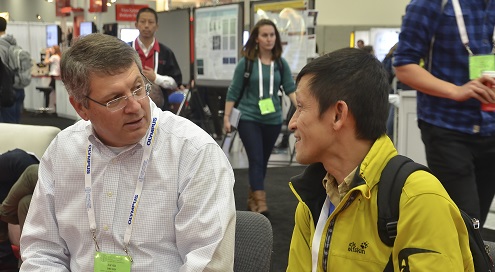 MBoC Editor-in-Chief David Drubin (left) spoke with an attendee at the Meet the Editor event in the Learning Center.

At its meeting in December, the Editorial Board discussed offering special issues on other subjects. This is an ongoing conversation focused on identifying fields of study that could beneficially be brought under the cell biology umbrella.

One of the challenges confronting MBoC is a continuing decline in submissions. This is a problem for most society journals, which face competition from an increasing number of large journals with lower standards for acceptance. It may also reflect the pernicious influence of the Journal Impact Factor (JIF). Although thoroughly discredited as a measure of the quality of research reported in a journal, the JIF still plays a role in some authors’ decisions about where to publish. ASCB continues to combat use of the JIF through its involvement with the initiative known as DORA (the San Francisco Declaration on Research Assessment). Finally, MBoC’s acceptance rate has climbed without any change in standards for acceptance. Thus it appears that authors are submitting fewer manuscripts that fail to meet the journal’s standards, perhaps sending those manuscripts to less selective journals.

Like all journals, MBoC must play a role in addressing concerns about the reproducibility of scientific research. However, we want to do this without unduly burdening authors. The Editorial Board is developing a checklist to enable authors to assess their compliance with emerging standards aimed at increasing reproducibility of published results.

MBoC understands that authors are concerned about the time required for manuscript review and continues to refine its review processes to serve authors better. Where possible, Monitoring Editors make decisions about manuscripts after one round of peer review. Another way that the journal facilitates review of manuscripts is by considering reviews from other journals. In some cases, Monitoring Editors may be able to make a decision about a manuscript based on such reviews.