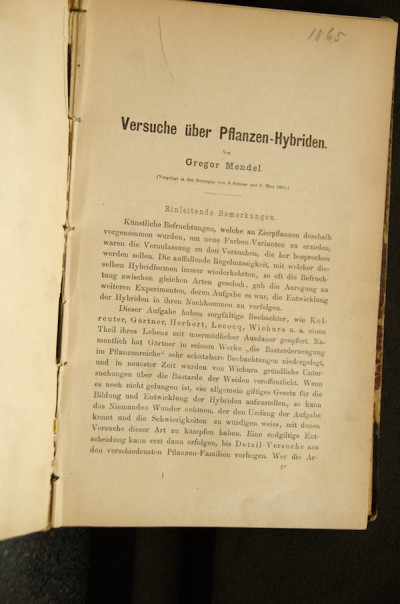 It is the ultimate consolation for every researcher who ever published a fabulous paper and got crickets. The paper, “Versuche über Pflanzen-Hybriden,” by Gregor Mendel was published 150 years ago this year in an obscure journal to no acclaim and less notice. Thirty-four years later and 15 years after Mendel’s death, his paper exploded on the scientific world, “rediscovered” in a complicated round robin by two rival botanists, Hugo de Vries and Carl Correns, and promoted to wide acclaim by a biologist, William Bateson. At a stroke, Mendel’s lost paper created the field we call genetics. To mark the occasion at NIH’s National Institute of General Medical Sciences (NIGMS), Carolyn Beans devoted a Biomedical Beat blog to updating Mendel, pointing out recent discoveries that reveal inheritance as more complicated than Mendel ever imagined in his legendary pea plants experiments. NIGMS science writer Alisa Machelek also went over to the National Library of Medicine to grab a picture of Mendel’s 1866 title page. (See picture.)

Life science educators and postdocs who have to suffer through Thanksgiving dinners with incredulous aunts (“You’re a doctor but you don’t have a real job yet?”) should take note: anyone who ever took high school biology has heard about Mendel’s peas. Unfortunately that’s often where their genetics education ended. Here’s your chance to pass the peas and steer the conversation toward the paradox of mitochondrial DNA.

This publication anniversary is also an occasion to reflect on journal impact factors (JIFs) and on tenure tracks. Clearly with only two publications in Verhandlungen des naturforschenden Vereins Brünn, a journal with a nano-scale JIF, Mendel would not have been given tenure in today’s academic world. Fortunately he had another kind of tenure, becoming abbot in 1868 of the St. Thomas monastery in what is now the Czech city of Brno. In 1870, a freak tornado destroyed Mendel’s greenhouses, ending his plans to return to experimenting once he found a moment to spare from his responsibilities as abbot. In this, Mendel was not the only scientist whose lab career ended with elevation into administration.

Mendel’s citation history is a fascinating story, as well as a caution to calculators (and merchants) of “impact.” As told by Robin Marantz Henig in her wonderful book, The Monk in the Garden, The Lost and Found Genius of Gregor Mendel, the Father of Genetics, the legend of the meek monk toiling in happy obscurity is not accurate. When his 1866 paper finally appeared, Mendel ordered 40 reprints (i.e., an old school PDF on paper), “an excessive number at that time,” writes Henig, “and set about publicizing his results as best he could within the limits of his naturally reticent personality.” Mendel sent reprints to many of the leading botanists and biologists of the day including Charles Darwin. We know this because one of Mendel’s 40 reprints was later found in Darwin’s library. The pages of the reprint were uncut, meaning that Darwin never opened it.

In a major, collective feat of scholarship, copies of 12 of these 40 reprints have been tracked down. (If you can find another copy of Mendel’s 1866 reprint with provenance, you’re looking at a major auction payoff.) Only one of the reprints elicited a response chiefly because its recipient, Karl von Nägli of the University of Munich, couldn’t dodge it.

Von Nägli was a scientific friend and peer of the plant physiologist, Franz Unger, who was Mendel’s mentor at the Royal Imperial University of Vienna. Mendel was no self-educated, back-country botanist. His Augustian order sent him to study in Vienna at a time when the elite Austrian and German universities were among the most advanced scientific institutions in the world. A paper about hybridization, von Nägli’s field, from one of Unger’s disciples, had to be acknowledged. Von Nägli took two months to draft a response. Oddly, von Nägli’s 1867 letter to Mendel is lost but his numerous handwritten drafts survived for modern scholars to unearth. This was no off-the-cuff reply but a finely crafted putdown. After some polite praise, van Nägli launched into “mistrustful caution,” misreading Mendel’s experimental design and insinuating that Mendel’s conclusions went far beyond his data. Writes Henig, “These notes suggest that von Nägli misunderstood the core finding of Mendel’s paper—that the recessive a determinant would of course remain in the hybrid and, rather than being lost, would eventually express itself, given the right combination of gametes in subsequent generations.”

Thus in 2016, we hail Gregor Mendel as the father of genetics and Karl von Nägli as the ancestor of “Reviewer #3,” that tribe of wicked and obtuse peer reviewers who couldn’t recognize scientific genius if it bit them.