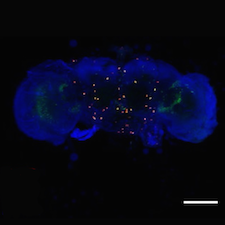 Caspase markers of apoptotic cell death in the brain of a developing drosophila. Cells experiencing current caspase activity are labeled with RFP, and cells that have experienced past caspase activity and their progeny with GFP. Blue are nuclei. Image from eLife 2016;5:e10936

Cells are often likened to computers, running an operating system that receives signals, processes their input, and responds, according to programming, with cellular output. Yet untangling computer-like pathways in cells is anything but simple, say Denise Montell, professor at the University of California, Santa Barbara, and Aviv Regev, a Howard Hughes Medical Institute investigator at the Massachusetts Institute of Technology and the Broad Institute. However, both are eager to try and will outline their latest efforts at the “Logic of Signaling” symposium at the 2016 ASCB Annual Meeting.

“My lab is understanding how cells maintain and build normal tissues. We’re studying cellular behaviors that underlie normal behavior and tumor metastasis, a great unsolved question in cancer,” Montell said. Her lab recently discovered that cells can bounce back from the brink of apoptotic cell death. “This wasn’t known before so now we’re looking at how cells do it, when do they do it, under what circumstances, and what does it mean,” Montell said.

To track these near-death experiences in cells the Montell lab generated a genetically coded sensor in Drosophila. The researchers expected the mechanism to be a stress response, but they found that it was normal during development. “It makes sense retrospectively,” Montell explained, pointing to neuronal development as an example. “You produce way more neurons that you need, and the neurons compete for trophic factors. If a group of cells are competing for trophic factors, then one cell starts to die, but if it gets more trophic factor, it could bounce back.”

Montell recently moved her lab to University of California, Santa Barbara, after 25 years in Baltimore where she rose from postdoc at the Carnegie Institution to professor at Johns Hopkins University. From Santa Barbara, Montell said, “I feel like I’ve gone back to college, teaching undergrads for the first time, and being in a basic science department… the move has been really rejuvenating. And I can’t complain about the weather and the view out the window.”

Based in Cambridge, MA, Regev is investigating how cell circuits transform signals into cellular responses. “Cells constantly receive signals and decide how to act. They convey to other molecules that convey to other molecules, and so on… you can view it like a computer circuit,” Regev said. Her lab wants to understand how these circuits work. Lately they’re doing “a lot of work to develop computational and experimental methods for single-cell RNA profiling to understand the ways in which cells differ from each other in physiologically meaningful ways,” she said.

Recently Regev’s lab used single-cell RNA profiling in T-cells. They wanted to understand more about T-cell exhaustion, a dysfunction T-cell state during cancer or viral infection when the T-cell stimulated with antigen can no longer respond.  Her lab found a genetic program that controls the full-blown exhaustion, Regev said. This could be useful for targeting exhausted T-cells in therapies.

Regev says that she didn’t plan to become a biologist. Her undergraduate education was interdisciplinary although she was originally drawn to computer science and math. But when she took a class in genetics. “I thought it was very fascinating that you could learn so much about biology without knowing the molecular details. It was about inference, that’s how genetics historically worked. It occurred to me that it was similar to computational systems,” Regev said.
As for what they’ll be talking about precisely at the 2016 ASCB meeting, neither can say yet, other than they expect to present the latest from their labs. “I hope some of what I will talk about we haven’t uncovered yet,” Montell said. “People will have to come to the talk. I usually talk about unpublished things,” Regev noted. 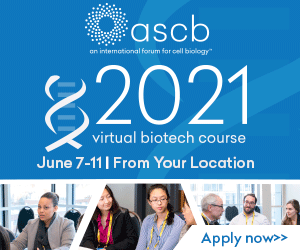