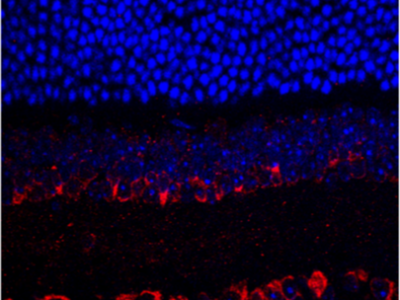 We’ve all been warned that blue light at night can make it hard to sleep because it affects our circadian rhythms. This is because a class of photoreceptors in the eye, called intrinsically photosensitive retinal ganglion cells (ipRGCs), are blue light sensitive and provide the sole conduit for retinal light signals to the circadian center in the brain. But now researchers reveal a new mechanism for how broad spectrum dim light also affects circadian rhythms. Surprisingly it works through activation of ipRGCs by light responses initiated in rod photoreceptors, according to University of California, Santa Barbara, Professor Craig Montell, along with postdoc Marquis Walker and colleagues. The link, say the researchers in a newly published paper in MBoC, is a protein, RdgB2, whose role in the mammalian retina was previously unknown, but now seems to play a key role in driving circadian behaviors at dim light intensities.

While light transduction in photoreceptors of flies is very different from that of mammalian rods and cones, ipRGCs have a phototransduction cascade that greatly resembles the signaling cascade flies. The RdgB2 protein was first identified in the fly eye, and so Montell and Walker wanted to know what RdgB2 was doing in ipRGCs in mammalian retina. They used mice lacking the RdgB2 gene to determine its role in the retina. They found that RdgB2 is required for normal circadian activity and pupil constriction, but only in dim light. Their work indicates that rather than functioning in ipRGCs, RdgB2 is critical in a subset of amacrine cells to sustain rod-driven input into ipRGCs.

“Rods and cones are important for image formation,” Montell explained in a recent interview, but the ipRGCs, which were discovered about a dozen years ago, are important for non-image forming functions, circadian behavior, and pupil constriction. “ipRGCs make up 1-2% of all retinal ganglion cells in the mammalian retina,” Montell said.

“These ipRGCs are the blue light sensors that you don’t want to activate with the light from your iPad screen before you go to sleep,” Montell explained. “But in this case, what RdgB2 is doing is helping to sustain input into ipRGCs, allowing them to respond to light that cannot activate them directly. So even if you don’t have blue light, other wavelengths will influence your circadian rhythm, but not as dramatically.” An indirect connection between the rods and the ipRGCs was known, but this is the first study to elucidate players in that pathway. “RdgB2 is the first molecule that has been identified that is involved in transducing rod-initiated light signals to ipRGCs,” Montell said. Walker added that the next step is “to identify how these [amacrine] cells project through retinal layers, and determine what other visual circuits they impact.”