How undergraduate research experiences work to keep students in STEM 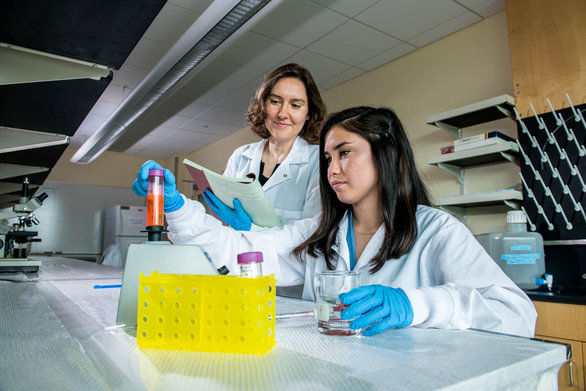 Undergraduate research experiences (UREs) are designed to help students discover if laboratory life is for them. Anecdotally they seem to encourage students to persevere in STEM degrees and careers. But West Virginia University researchers wanted to gather hard evidence to discover how and why UREs seem to work.

A team led by Paul R. Hernandez, assistant professor of Educational Psychology, surveyed more than 200 students participating in six different STEM UREs at his university over two summers. The undergrads were queried at the start, midpoint, and conclusion of their 8- to 10-week research programs. The students ranked their responses to survey questions on a numerical scale. Their responses provided an indication of how well participating in a URE helped to socialize students into the values and expectations of the scientific community.

The work of Hernandez and his colleagues provides critical information to agencies and universities that invest time and money in UREs, which tend to be costly endeavors. “Funding agencies are betting on UREs to promote STEM degrees and careers,” Hernandez explained. “Even though we have been studying them for at least 20–25 years, we are still trying to figure out where these research experiences are situated among the other clarifying experiences that a young person has in their professional development and in their decision of where they plan to spend the rest of their lives. We wanted to find out what social influencing agents set the norm and expectations.”

Project ownership turned out to be one of the significant factors in determining if a student planned to remain in a science major or pursue a scientific career. Questions such as, “To what extent did you formulate the hypothesis for your research question?” revealed the degree of the student’s ownership.

But the factor that was even more important than project ownership was how well the student was able to relate with his or her faculty mentor. “The degree to which they saw their PI as a role model in terms of adopting and internalizing scientific community values was important to those who were most likely to persist in scientific endeavors,” Hernandez said. “They had to be able to see similarity and attainability in their mentor’s lifestyle.”

These two factors—mentorship and project ownership—are elements that can be supported by educators, Hernandez said. To make UREs even better, he suggests prospective students and mentors seek out training, such as the free Entering Mentoring resource available on the Howard Hughes Medical Institute website.

Going forward Hernandez will be conducting a longer study that begins in a student’s first year of college and follows him or her to graduation. Hernandez’s findings can be found in the article “Student Integration into STEM Careers and Culture: A Longitudinal Examination of Summer Faculty Mentors and Project Ownership,” which was published online in the September 1, 2018, issue of ASCB’s education journal, CBE—Life Sciences Education (LSE). You can also watch a recorded webinar featuring an in-depth discussion of this work, “Drawing Students into Scientific Careers through Research Role Modeling,” which can be found on ASCB’s YouTube channel.