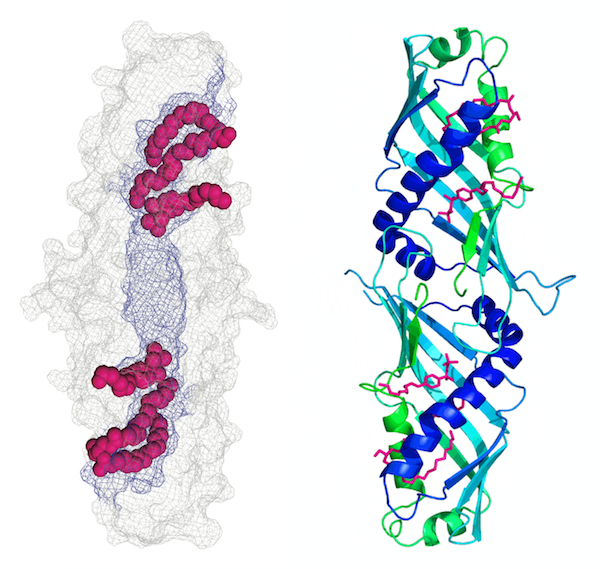 Structure of the lipid binding domain dimer of extended-synaptotagmin 2, an ER to plasma membrane tethering protein with a putative role in lipid transfer. From the work of Curtis Schauder, Xudong Wu, Pietro De Camilli and Karin Reinisch (Modified from Nature vol 510, 552-555, 2014).

The cells in your body run a kind of Amazon.com warehouse, sorting, packaging, and shipping items with remarkable speed and efficiency. But the warehouse operations inside neurons have an additional challenge: the packaging stations (the Golgi) are in the cell body while many cargoes need to be delivered to the synapse, which in some neurons can be a meter away. Even the fastest of cellular packages can take two days to travel the meter to their destination at the synapse. Yet the turnover of some cargoes, like lipids, can happen within nanoseconds, so cells must have other ways to transport these goods. Along with others, Pietro de Camilli, professor at Yale University, suspected that there was a “factory direct” route. De Camilli told the Membrane Trafficking symposium the story of how membrane contact sites likely provide a direct source of lipids Tuesday at the 2014 ASCB/IFCB meeting in Philadelphia.

The cellular factory, the endoplasmic reticulum (ER), has a network of tubes that extend everywhere in the cell, including the synapse, de Camilli explains. Contacts between this network and the cell membrane were observed over 50 years ago but their function was not yet known. But de Camilli believes that these contacts could be a perfect opportunity to swap cargo straight from the factory to the destination. Indeed, numerous proteins had already been implicated in ER-membrane tethering.

One of these tethering proteins is an extended synaptotagmin (E-Syt) protein. But de Camilli and his colleagues thought it might be doing more than just tethering as it has a domain that could act in lipid binding. De Camilli’s colleagues did a structural study and found that E-Syt can dimerize and harbor lipids. In his ASCB talk, de Camilli showed how the researchers observed lipid transfer in vitro using synthetic vesicles made with fluorescent lipids and incubated with E-Syt protein. It seems that membrane contact sites provide a direct source of lipids at the membrane in addition to the traditional packaging route, says de Camilli.