Expanding the toolbox of lipid exploration

Animal cells don’t have a solid cell wall but a protective layer composed in part of oily substances called lipids. Lipids are one of the most critical types of molecules in our cells, functioning to enclose our cells in membranes. Regulation of lipid levels and specific lipid composition in membranes is crucial for normal cell function, but the tools available to study lipids are limited.

When various genes become mutated, they can trigger the cell to make too many or too few lipids. This misaccumulation of lipids can cause cataclysmic problems with cell physiology, leading to issues from cancer to viral infections to muscular dystrophy. Cells have policing enzymes to ensure proper regulation of lipid levels, with some enzymes triggering lipid production and others halting its synthesis.

Lipid function depends not only on how many lipids there are but also on what types of lipids compose the membrane. Every kind of sphingolipid, phospholipid, or sterol has a unique shape so that it can bind to, or plug into, different proteins. This means that using specific lipids can make different proteins stick to the membrane or even change the protein’s shape to modulate the protein’s activity.

Understanding what type and how many lipids membranes are composed of can provide essential information to scientists about cell function and interaction with proteins. But elucidating the lipids involved is much easier said than done.

Gerald Hammond, associate professor in the Department of Cell Biology at the University of Pittsburgh, investigates better ways to identify lipids by expanding the biochemistry toolbox. The current techniques available “take a bunch of membranes and mash them up for chromatography or other classic biochemistry techniques,” he explained. “But you destroy the cells while you do that.” Hammond and others in the field are working towards keeping cells intact and adding “some sort of tags or labels onto these lipids so we can see where they are,” called lipid biosensors.

Hammond describes the recent advances in lipid biosensor technology in his Technical Perspective published in Molecular Biology of the Cell. Lipid researchers often manipulate the levels of lipids using those policing enzymes that turn on or off a lipid’s production and then follow the resulting change with biosensors. Lipid biosensors are made by taking pieces of genes attached to lipids. These lipid biosensors allow researchers to see where lipids are and what they interact with.

While some exciting biosensors are being developed, the lipid biosensor toolbox is far from complete.  Some biosensor targets featured in the article include a biosensor for phosphatidic acid, an intermediate in synthesizing many phospholipids and a messenger to specific signaling pathways, and lipid messenger PIP3, whose production signals PI-3 kinase, which is an important growth regulator. Phosphatidic acid currently has a published biosensor called PASS (phosphatidic acid biosensor with superior sensitivity). However, the paper suggests that improved biosensors with increased sensitivity are needed. PIP3 also has multiple published highly sensitive and selective biosensors, but they still have minor problems, such as limiting membrane translocalization of PIP3.

“We can define broad classes of lipids, but they have a lot of different shapes,” Hammond said. “And we aren’t able to detect subtle differences in lipid species.”

The gene fragments used to make biosensors often stick to other things in the cell, so finding highly lipid-specific sensors that don’t talk to anything else is only possible for a small subset of lipids at the moment.  Hammond believes “the big challenge for the future is to discover new ways, enzymes, and proteins to manipulate or image these lipids.” His laboratory is currently working on improving lipid biosensors, with fourth-year PhD students Claire Weckerly’s research on improving a biosensor for phosphatidic acid and Morgan Ricci’s work on gene editing PI 3-kinase enzymes to include fluorescent tags.

Chloe Kirk is a PhD candidate at the University of Miami in the biochemistry and molecular biology program. Outside of the lab, she loves to bake, read and communicate science. Follow her on Twitter: @chloeckirk 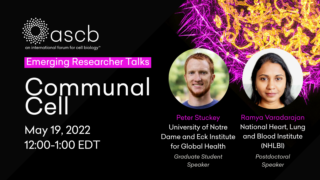 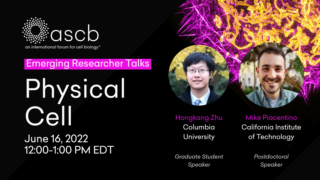