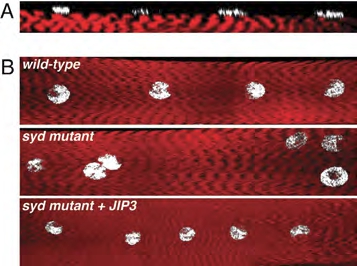 A whimsically named fly gene, Sunday Driver, a.k.a. syd, and its mammalian analog, JIP3, seem to be in the driver’s seat when it comes to parking the multiple nuclei of a skeletal muscle cell in their correct places, say researchers at the Sloan Kettering Institute (SKI). Getting that wrong and having mispositioned nuclei is a classic diagnostic sign of human congenital myopathies, a string of inherited muscle diseases such as Emery-Dreifuss muscular dystrophy (EDMD). 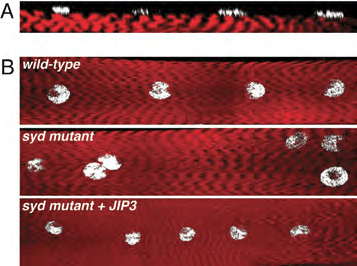 Drosophila larval muscles, stained for sarcomeres
(contractile units of muscle) in red and nuclei in white.
A) Side view of Wild-type muscle, displaying the
peripheral location of nuclei in muscle cells, outside the
boundaries of the sarcomeres. B) Top view of muscles,
highlighting the presence of mispositioned nuclei in syd
mutants. However, note the restored spacing of nuclei in
Drosophila syd mutant muscles expressing mammalian
JIP3 protein.A whimsically named fly gene, Sunday Driver, a.k.a. syd, and its mammalian analog, JIP3, seem to be in the driver’s seat when it comes to parking the multiple nuclei of a skeletal muscle cell in their correct places, say researchers at the Sloan Kettering Institute (SKI). Getting that wrong and having mispositioned nuclei is a classic diagnostic sign of human congenital myopathies, a string of inherited muscle diseases such as Emery-Dreifuss muscular dystrophy (EDMD). When Victoria Schulman in the SKI lab of Mary Baylies mutated the syd gene in the Drosophila melanogaster model, both the embryonic and larval muscle tissue in flies showed unevenly spaced and clustered nuclei. The hatched larvae with defective Syd protein were hobbled, crawling much more slowly than their healthy counterparts. Furthermore, flies with defective Syd protein moved much more slowly than their healthy counterparts. Adding mammalian JIP3 protein to the syd gene mutant flies rescued both proper nuclear spacing and locomotive ability.

Looking at flies to investigate the cell biology of human muscle diseases may seem like the long way around, but Schulman and Baylies thought they could get clearer answers to basic questions in the flexible fly model than in traditional human muscle cell cultures. Basic answers are definitely needed. Congenital myopathies account for one-tenth of all neuromuscular disorders, causing deterioration of skeletal muscle and eventually death. Despite advances in research and medicine, there are currently no cures and treatment is largely palliative.

Studying congenital myopathies such as EDMD poses special challenges for cell biologists. Unlike typical cells, which have a single nucleus located in the center of each cell, muscles are composed of long multi-nucleated cells with the nuclei strung out like seeds in a bean pod. That’s because muscle cells arise from the fusion of numerous myoblasts, the building blocks of muscles. Post-fusion, the many nuclei within the new cell spread out to maximize internuclear distance and usually move to the cell periphery to avoid interfering with muscle contraction. Skeletal muscle cells with unevenly spaced nuclei, or nuclei parked in the wrong spot, are telltale in tissue biopsies of patients with suspected inherited muscle disease such as EDMD (1/100,000 births) and centronuclear myopathy (1/50,000 births). And yet no one is certain whether out-of-position nuclei are a cause or consequence of muscle disease.

Schulman and Baylies believed that the fruit fly was an ideal organism for these studies because its life cycle begins with an embryonic stage that would reveal critical details about initial muscle formation. Embryos then hatch into larvae that use their newly built muscles to crawl toward food, providing a measure to assay muscle function.

Using the fruit fly model system, Schulman and Baylies identified three types of proteins required for proper myonuclear positioning: 1) cytoskeletal filaments known as microtubules, which serve as “tracks” or cellular “roadways,” 2) the motor proteins kinesin and dynein, which travel along these tracks, and 3) motor protein regulators such as Ensconsin and Sunday Driver (Syd). Mechanistically, Syd works as a control switch to activate one motor at a time to coordinate their collective efforts to pull and move muscle cell nuclei into proper position.

“Collectively, we implicate syd as a necessary regulator of nuclear positioning in muscle tissue, and show that mispositioned nuclei are a possible cause, not a consequence, of muscle disease,” write Schulman and Baylies. They also point to the utility of model organisms in understanding a human disease as complex and dangerous as congenital myopathy.