It took the Trump White House about 18 months to nominate a director of the White House Office of Science and Technology Policy (OSTP). Now, after two years in office, the Trump administration finally has someone in the post.

During the closing hours of its 115th session the U.S. Senate confirmed Kelvin Droegenmeier, a meteorologist, to the post. The reason for the Senate’s delay in approving his appointment has never been clear. He has an outstanding scientific record, including being a member of the faculty at the University of Oklahoma for over 30 years and serving as the school’s vice president for research for a decade. His research has focused on numerical 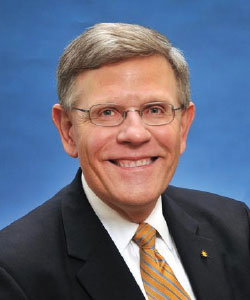 He is also familiar with the ways of Washington, DC, and with science policy. In 2004, President George W. Bush appointed him to serve on the National Science Board, which oversees the National Science Foundation. He was reappointed in 2011 by President Obama and has been serving as vice chair of the board since 2014.
His nomination was highly praised by members of the scientific community and from within Washington, DC. In a story in Science, John Holdren, President Obama’s science advisor, gave him glowing recommendations, calling him “a very good pick.”

Questions remain about how much Droegenmeier will be able to use his scientific and policy experience in his new position. OSTP, which played an important role in policy making during the Obama administration, has seen its staff and budget sharply reduced in recent years.

Along with the title of Director of the Office of Science and Technology Policy, many previous OSTP directors also held the title of either Presidential Science Advisor or Assistant to the President. These additional titles often indicate the importance the administration puts on science and on advice from the OSTP. It is also an indication of the level of access the OSTP Director will have to the president. At press time, it is unclear if Droegenmeier will have additional titles beyond Director of OSTP and what role he will play in Trump administration decision making.