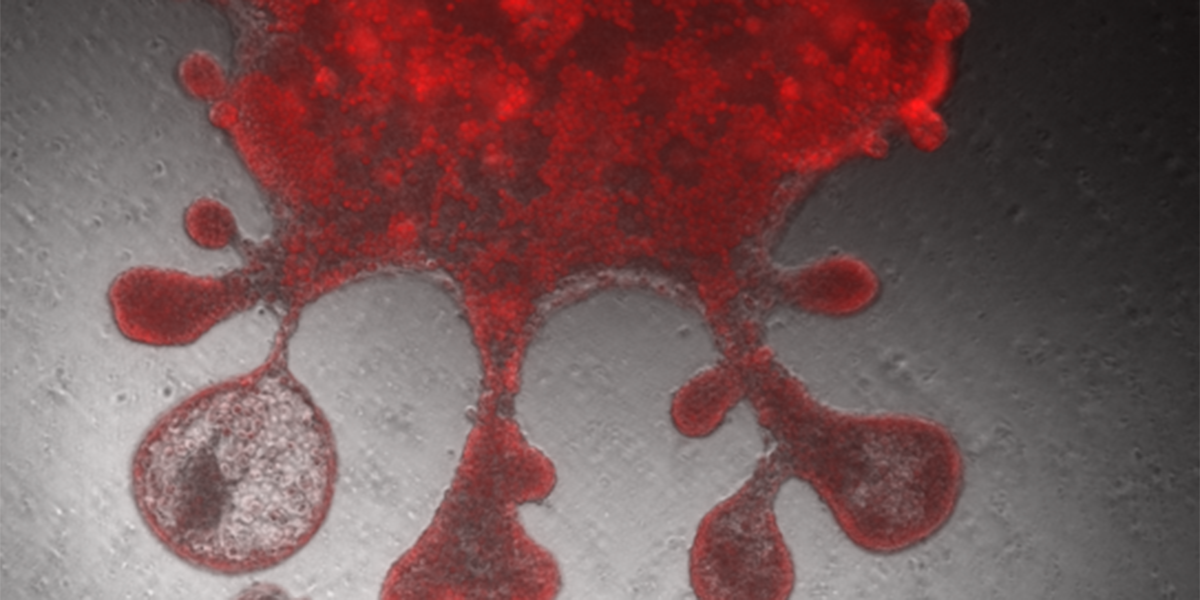 Purushothama Rao Tata’s laboratory at the Duke University School of Medicine developed lung cell organoids—mini-lungs—from alveolar type 2 (AT2) progenitor cells as a means to better understand how lungs react to chemical toxins and pathogens, and to find ways for the lungs to heal themselves. Then COVID-19 hit.

“Lungs are highly prone to damage as they are constantly exposed to environmental factors via the air we breathe,” said Tata, an assistant professor of cell biology. “Our research has been focusing on how different lung cells sense and respond to these various injury-causing agents including chemical toxins and pathogens. We are new to coronaviruses, but we have been studying how lung cells respond to pathogens such as Influenza virus.”

Tata’s lab used the mini-lung model to study how the AT2 cells reacted to SARS-CoV-2 infection. Using state-of-the-art biosafety level-3 facilities available at Duke University and the University of North Carolina at Chapel Hill, the team discovered that the immune response in the lung organoid mirrored what was happening in vivo.

“This is one of the key findings in our study,” Tata said. “A direct comparison of the transcriptome profiles between infected lung organoids and COVID-19 autopsies revealed a striking similarity in their inflammatory responses. Our study found that in response to viral infection, AT2 cells release a class of defense molecules called interferons (IFNs), which are known to have the ability to combat viruses.”

Based on these findings, Tata suggests that pretreatment with IFNs at low concentrations could potentially treat COVID-19.

“We also found that pretreatment of AT2s with low amounts of IFNs prior to infection was sufficient to eliminate the virus,” Tata remarked. “So, pretreatment with IFNs is a way to ‘energize’ AT2 cells to combat the virus more efficiently. Such approaches have been already in clinical trials to combat other viral infections.”

But too much of a good thing isn’t. “When produced in excess, interferons can be detrimental and induce suicidal death in AT2 cells,” Tata said.

Developing mini-lungs presents unique challenges. Lungs are complex and composed of many different types of cells. Furthermore, to grow a mini-lung, you have to consider the molecular chatter taking place between cells.

“The close communication between these different cell types is essential for tissue maintenance and recovery after injury,” Tata said. “Prior studies have shown that when lung stem cells were put in isolation, they did not survive and/or propagate. But when the lung stem cells are co-cultured with lung fibroblasts, albeit at very low efficiency, they can form ‘mini-lung’ like structures. It was clear that a stimulus coming from fibroblasts is essential for AT2 cell propagation, but we didn’t know the exact nature of these signals.”

Tata’s lab used single-cell transcriptome analysis to identify the specific communication molecules used by AT2 cells and lung fibroblasts. “We then exogenously supplemented each of these candidate molecules either alone or in combination and came up with a right recipe that is sufficient to propagate AT2 cells and generate ‘mini-lungs,’” he said.

“Another aspect of our work is to understand the mechanisms by which a single AT2 cell is able to copy itself to generate a large number of cells to recreate lost tissues,” said Tata. “Even more remarkable is that they are capable of self-organizing themselves outside the body in a lab dish. Our goal is to understand and harness these self-organizing principles to potentially enhance endogenous regeneration as well as to recreate lung tissues for regenerative medicine applications.”

“The ‘mini-lung’ model we generated is applicable to other respiratory viruses that target lung epithelial cells,” Tata added. “More importantly, now we do not have to depend on cancer cell lines to model and study infectious diseases. The ‘mini-lung’ model is scalable and allows for genetic and pharmacological screens for therapeutic drug discovery. Indeed, we are currently testing novel candidate molecules that have the potential to serve as a prophylactic to fight against SARS-CoV-2.”