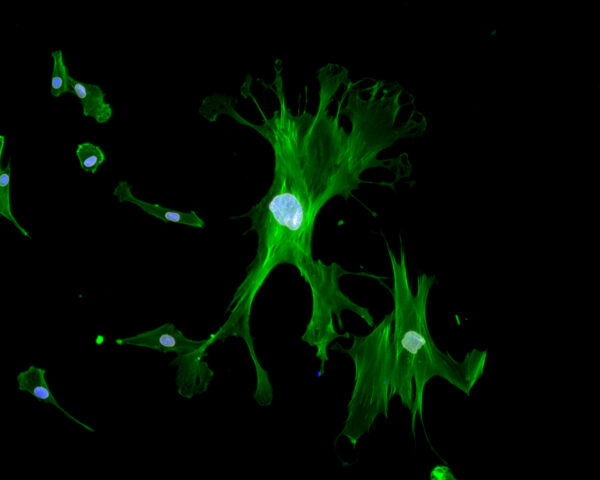 Dermal fibroblasts derived from a healthy 85-year-old donor stained for F-actin (green) and DNA (blue). Image shows the presence of both senescent and non-senescent cells in 2D cell cultures.

They say you are only as old as you feel. The truth is you are as old as your cell morphology dictates. Jude Phillip, an assistant professor at Johns Hopkins University, thinks a lot about aging and has been pondering the questions: “Can we determine a person’s age based on the properties of their cells? Is aging information encoded in cells?”

In his talk at Cell Bio Virtual 2020, “Defining Cell-based Biomarkers of Aging,” he reminded his audience that U.S. Census data indicate that by the year 2050, the population of adults over the age of 65 will double. This means that 20% of the U.S. population will be over the age of 60, he said.

While so many folks are living longer, their quality of life may be poor, Phillip said. Science should turn its attention to studying aging in new ways to address the problems of getting older, such as frailty and the onset of disease.

“Why should we live longer if we are sick and unhealthy when we could live longer being healthy and resilient?” Phillip said.

Phillip approaches his inquiry into aging as a question of length scales. There is the macro-length scale (the epidemiological level), the scale of tissues and organs, down to the micro- or nano-scales (the cells and the genes). Rather than study aging only at the tissue or organ level or even at the genetic or molecular level, Phillip’s lab has taken the middle road—evaluating age at the level of a single cell. He said the morphology of the cells themselves is kind of the “missing link” between what one observes in a patient at a clinic and what one might discover through genetic analysis.

Questions on aging span these length scales, Phillip said. “How are external disease manifestations impacted by changes at the cellular or molecular level, and what impact do they have on these smaller length scales?” is an overarching theme of his work.

“Cells are integrators of molecular signals,” Phillip said. “If there is a defect at the molecular or genetic level, it will be integrated into the cell, and then propagated by the cells across tissues and organs and ultimately manifest as disease.”

For his work, Phillip used dermal fibroblasts from healthy individuals age 2–96. The cells were collected as part of the Baltimore Longitudinal Study on Aging. Phillip then examined the correlation between the cell’s age (based on the age of the person it was taken from) and the biomolecular and biophysical properties quantified. His lab used high-throughput technologies to analyze individual cells. Some of the biomolecular properties observed included what proteins they secreted, their ATP production levels, changes in the cytoskeleton, their ability to repair DNA damage, and DNA organization. Some of the biophysical properties considered included cell shape (morphology), motility, mechanics, and traction strength. A total of 208 properties were considered.

In a previously published study, Phillip reported that of the biomolecular features, ATP production was the most strongly correlated with age. However, his more recent findings indicate that the biophysical properties of cell morphology and motility are perhaps even more robust biomarkers of age. Phillip observed that cells lose motility with age. That is, they slow down, just like us! Phillip also noted that cell populations become more homogeneous with chronological age. That is, cell populations in older adults lose heterogeneity, Phillip said. This perhaps makes it harder for them to bounce back from stress or disease.

“Our findings suggest that the quantification of cellular age may be used to stratify individuals on the basis of cellular phenotypes and serve as a biological proxy of healthspan,” Phillip said.

Along with the normal, presumably healthy cells, Phillip also analyzed cells taken from those with Werner syndrome and Hutchinson–Gilford progeria syndrome, “two rare genetic conditions that result in phenotypes that show aspects of premature aging.” Cells with disease exhibited the properties of cells taken from chronologically older healthy individuals.

Ultimately, Phillip said, understanding and predicting aging at the single-cell level could shape how medicine approaches treating the problems of old age. It could also have applications in developing precision medicine approaches that are tailored to meet an individual’s unique needs.