The Centrality of Cell Biology

My earliest encounter with cell biology occurred when I was in medical school during the early 1970s. The beauty and complexity of the intracellular world had a deep impact on me and quickly sealed my decision to become a scientist. In those days, cell biology was still a rather young discipline. Much of what was known about the cell was still based on microscopy snapshots and on a rather crude biochemical analysis of subcellular fractions. The degree of mechanistic insight into the basis of life that would be acquired during the subsequent decades was unthinkable at the time. But progress occurred very fast. Technology developments and their widespread use drastically and rapidly changed the landscape of cell biology. By now we know the precise identity of many cell components, and for some of them we also know the atomic structure and dynamics. We can think of cells no longer as static entities, but as ensembles of molecular machines.

A Convergence of Fields
This impressive progress in cell biology resulted from the convergence of many different fields. Biochemistry became cell biology when homogenizers and test tubes were complemented by microscopes and ultracentrifuges to identify subcellular locations of biochemical reactions. Forward and reverse genetics approaches became mainstream in cellular studies. The quantitative power of biophysics became applicable to cell biology as technical advances, such as live imaging, brought math and statistics to a field that had been primarily dominated by qualitative observations. New imaging methods made possible the analysis of cell structure at all scales of resolution, thus blurring discontinuities between studies of molecules at atomic resolution (once the domain of structural biologists) and by conventional electron microscopy and light microscopy. Physicists became increasingly attracted to cell biology both to elucidate the principles underlying cell function and to develop tools for cell exploration and cell manipulation.

As 2016 ASCB President Peter Walter passes the torch to me, I reflect not only on the impressive progress of cell biology but also on how much still remains to be done. We have made major progress in taking apart different components of the cell and in determining their composition and action. In many cases, cellular processes have been reconstituted with purified components. However, as we learn about 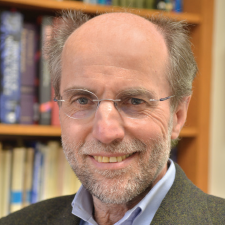 specific mechanisms at an ever-growing level of resolution we also need to make progress at the opposite end of the spectrum. We need to complement the study of one molecule (or sets of molecules) at a time with the analysis of how the collective function of all these molecules is orchestrated in living cells. A synergy of wet lab studies and in silico analysis will be needed for this progress.

We need to complement the study of one molecule (or sets of molecules) at a time with the analysis of how the collective function all these molecules is orchestrated in living cells.

We also need to acquire a better understanding of cellular life in all its different forms. Research of the past decades has shown that even the most sophisticated properties of specialized cells represent adaptations of basic cellular functions. This realization fostered reductionist approaches and the use of unicellular models in cell biology. Studies of tissues, which had dominated cell biology in its early years, have given way to the study of cell lines, as also reflected in the focus of many cell biology departments. But ultimately we need to elucidate how the basic features of cells have evolved and adapted to account for the nearly infinite manifestation of life on our planet and for the specialized structures and functions of different tissues in a given organism. Advances in cell biology will continue to rely on a continuous feedback between information emerging from specialty fields and from the study of basic mechanisms.

Interfaces between Cell Biology and Medicine
Importantly, a focus on the cell is needed to understand diseases. As Rudolph Virchow, a founding father of medicine, recognized in the mid-19th century, all diseases can be traced to cells. So, the prevention and cure of diseases is closely dependent upon progress in cell biology. Luckily, interfaces between cell biology and medicine are continuously expanding in both directions. Basic knowledge resulting from curiosity-driven research generates information relevant to medicine. Increasingly, however, the study of human diseases yields information that is critical to advance fundamental knowledge, thus accelerating the path of discovery. In the area of cell biology–disease connections, an especially important priority is leveraging cell biology to identify therapeutic approaches to control the course of neurodegenerative diseases. The cross-fertilization of labs primarily focused on the study of these conditions and of labs that work on fundamental aspects of neuronal cell biology will be vital to produce advances in this field.1

[T]he prevention and cure of diseases is closely dependent upon progress in cell biology.

A caveat to the very positive aspects of the bidirectional flow between cell biology and applied fields such as medicine is the strong emphasis of many funding sources on topics with immediate practical applications, primarily disease-relevant research. This provides an incentive to cell biologists to shift their focus from basic cell biology toward applied research. While this trend is having, and will continue to have, a major positive impact on medical advances, it is also important that the emphasis on applied science does not compromise the role of cell biology as a central and distinct discipline in biology. If we want to understand life, including its pathological manifestations, we need to understand cells, the fundamental units of life. Not surprisingly, major new science enterprises in the biomedical sciences, for example the Chan Zuckerberg Initiative and the Allen Institute, are investing in cell biology.

The centrality of cell biology in the biomedical sciences was testified to by the recent ASCB Annual Meeting in San Francisco (December 3–7, 2016). An impressive program, put together by Program Chair Jonathan Weissman in cooperation with Peter Walter, featured spectacular and exciting science ranging from the molecular basis of the social behavior of bacteria to the power of medicine in informing cell biology, as exemplified by the keynote lecture of Richard Lifton. Member-organized pre-meeting Special Interest Subgroup sessions as well as a very successful doorstep meeting on the Cell Biology of Cancer organized by Ira Mellman and Alan Ashworth added to the success of the meeting.

[I]t is…important that the emphasis on applied science does not compromise the role of cell biology as a central and distinct discipline in biology.

The 2017 ASCB|EMBO Meeting
The next ASCB meeting, to be held in December 2017 in Philadelphia, will be further enhanced by the partnership with the European Molecular Biology Organization (EMBO), a joint venture that acknowledges the increasingly international nature of our Society. I would like to thank EMBO Director Maria Leptin and Past-President Peter Walter for their enthusiasm in joining efforts to organize this meeting. Program Co-chairs Tobias Walther (United States) and Laura Machesky (UK) along with an outstanding committee with strong European representation have worked hard at preparing another exciting program. As in 2016, there will be a Doorstep Meeting emphasizing connections between cell biology and medicine. The 2017 Doorstep Meeting will be dedicated to neuroscience and will be titled “Cell Biology of Degeneration and Repair in the Nervous System.”

As I begin my term as President, I would like to thank all the ASCB members for their support of our Society and in particular those members who volunteer on our committees or in other leadership roles. I also would like to express special gratitude to the staff of the central office whose excellence, enthusiasm, and tireless work is so critical to the success of ASCB. I feel fortunate to work with a community such as ASCB that not only has played and continues to play such an important role in furthering evidence-based knowledge, but also places emphasis on values intimately connected with the practice of science, such as integrity, cooperation, training of young people, mentorship, inclusiveness, and active participation in societal issues. As a new administration takes its place in Washington, we feel a special responsibility to uphold all of these values. I look forward to working with Past-President Peter Walter, President-Elect Jodi Nunnari, our outstanding Executive Director Erika Shugart, and the entire ASCB leadership to strengthen our Society and advance it goals in 2017.