On Preprints, and Beer and Tacos

A meeting (ASAPbio) was held on February 16–17 to discuss the role of preprints in biology, which sparked a New York Times Op-Ed by Amy Harmon under the provocative title “Handful of Biologists Went Rogue and Published Directly to Internet”1 and an article in the Economist entitled “Taking the Online Medicine.” 2 These articles expose to the public a need to fix a slow and antiquated publishing system that holds our community in a stranglehold, and the potential for scientists to regain control. Ron Vale, who held the position of ASCB President in 2012, writes about one tangible effort that shows how we could move forward. 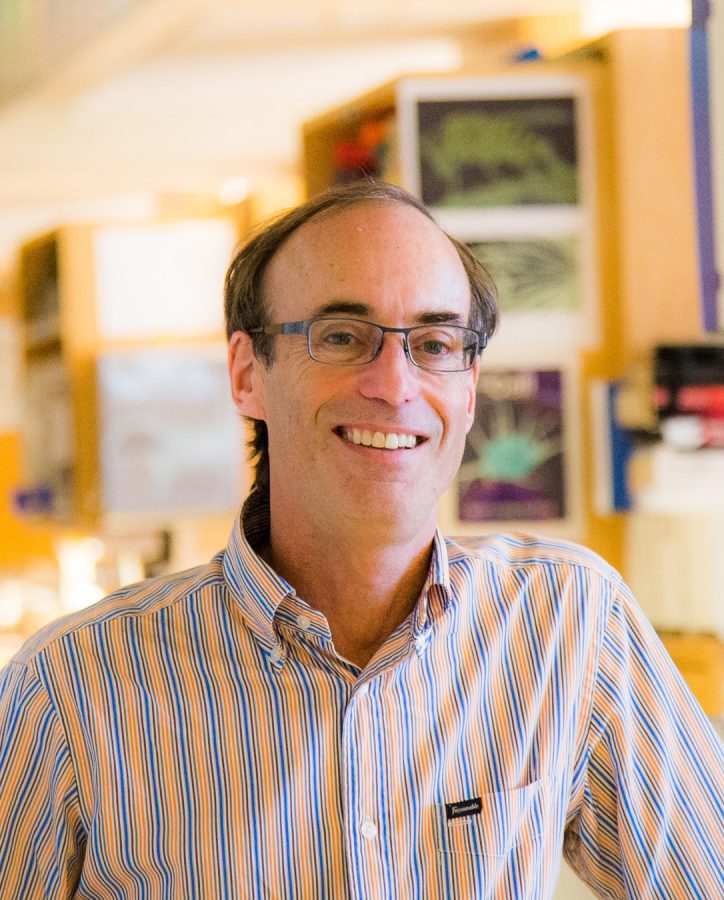 In 2008, your ASCB President Peter Walter (together with Martin Raff and Alexander Johnson) published a Commentary in Science entitled “Painful Publishing.”3 The callout quote from the article was “The stress associated with publishing experimental results—a process that can take as long as obtaining the results in the first place—can drain much of the joy from practicing science.” The situation does not appear to have improved in the past eight years and arguably has gotten worse. Scientists feel pressure to publish in elite journals (which accept the same number or even fewer papers now than they did a couple of decades ago), spend their time dealing with journal rejections and often resubmit even their best work to multiple journals, deal with lengthy resubmissions to satisfy three or four referees, and shorten their increasingly massive studies to comply with the haiku-like formats of some journals. A recent poll conducted by ASAPbio (a grass roots science organization described below) revealed that 91% of 392 respondents were dissatisfied with the current state of publishing in biology (http://asapbio.org/survey).

As Walter and colleagues point out in their article, the current publishing system is affecting the culture of biology and the joy of science, making it less attractive as a career. But beyond “job satisfaction,” there are deeper issues at stake.4 First and foremost, scientists are funded by the public (e.g., the National Institutes of Health [NIH]) and private foundations to create knowledge for the public good. If new knowledge (the most powerful mechanism advancing science) is not being delivered in a timely manner, then scientific progress and potential downstream public good are delayed. Second, career advancement is linked to journal publications, and a slow system of publication means potential delays in career transitions. Over the past few decades, it has been taking longer for students and postdocs to complete their training and longer for junior faculty to receive their first NIH grants. While not the sole reason, increasing time to publication is likely contributing to the lengthening time to independence.

Scientists and funding agencies are beginning to reexamine our system of scientific communication, particularly with respect to: 1) open access (the ability to view scientific results by scientists worldwide without paywalls), 2) improving the accuracy and transparency of peer review, 3) improving metrics for evaluating scientific work, and 4) minimizing delays in scientific publication. Progress has been made in the first two issues, particularly by creating new journals with new models of access and review. ASCB has been a leader in these issues, particularly in addressing issue 3 through its role in drafting the San Francisco Declaration on Research Assessment (DORA).5 But overall, transformation has been slow because the ecosystem of biology journals is large and enormously complex (with each journal having its own policies, governance, and business model). Furthermore, scientists themselves have been complacent in improving their own standards and behaviors of evaluation and peer review. Improvements in evaluation and review must continue. But open access (topic 1) and minimizing publication delays (topic 4) could be more under the immediate control of scientists than we might think, as described below.

Physicists, mathematicians, and computer scientists use a mechanism called a “preprint” to communicate their findings prior to publication in a journal. Simply put, a preprint is a complete scientific manuscript (usually the same one being submitted to a journal) that is uploaded to a server. After a brief inspection to screen for “pseudoscience,” the manuscript is posted without cost to the author and can be viewed without charge by anyone in the world. Thus, transmission of a completed scientific study is fast, open, and free, although it is not validated through peer review.

The physicist Paul Ginsparg developed the server called arXiv 25 years ago, a time before the World Wide Web even existed in its present-day form. Housed at Cornell University, arXiv accepts 100,000 scientific communications per year (at a cost of ~$10 per communication). Virtually all physicists also submit their papers to a peer-reviewed journal; the journal publication provides validation of the work and helps in evaluations by promotion and grant committees. However, in their daily routine, physicists wake up in the morning and first check arXiv for the latest work coming out in their field. Work posted on arXiv also is universally acknowledged as establishing priority for a new discovery and is cited as such. With its 25 years of experience, arXiv provides a strong proof of principle of the impact of preprints as well as experience and data on issues that worry many biologists (e.g., the potential for scooping, posting of low-quality work, and dissemination of irreproducible work or pseudoscience, all of which will be discussed later).

Preprint servers exist in biology (e.g., bioRxiv, as well as several others); their current usage is relatively low but growing. A recent meeting called ASAPbio (Accelerating Science and Publication in biology) was held to explore the future of preprints in biology, discussing possible benefits and concerns. The meeting was held at the Howard Hughes Medical Institute in Chevy Chase, MD, on February 16 and17 and co-organized by Jessica Polka (whose meeting report appeared in the ASCB Newsletter6), Daniel Colón Ramos, Harold Varmus, and myself. Participants included a diverse group of junior and senior scientists, representatives of various funding agencies (public and private), senior editors of scientific journals, and thought leaders on data management. All of the talks and breakout sessions were live streamed to encourage broader community participation. A full record of the meeting is available on the ASAPbio website (http://asapbio.org/meeting-information). Meeting reports also have been written by Needhi Bhalla7 and Gary McDowell,8 two junior scientists, and another report that reflects the views of scientists, funders, and journals that emerged from the meeting will be submitted shortly to a journal. The meeting also was recently covered in the popular press, including the Economist2 and the New York Times1 and in science journals such as Nature.9  The consensus of the meeting was that the wider adoption of preprints could have significant benefits for life sciences with relatively little downside, especially if combined with peer review through a journal. In this column, I discuss benefits and concerns regarding preprints and how the ASCB can participate in further developments and discussions. 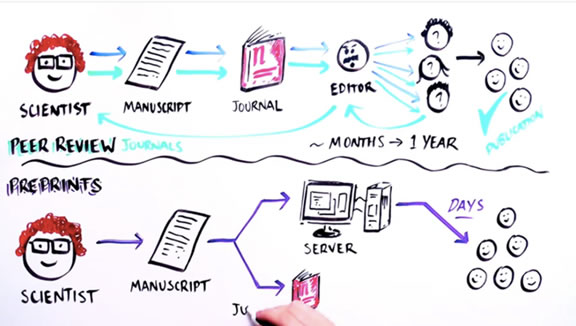 Frame capture from a video on how to modernize publication of research results (produced by Youreka Science in collaboration with ASAPbio and iBiology; http://www.ibiology.org/ibioeducation/what-are-preprints.html)

The Roles of Preprints and Journals

“Beer and tacos—why not both?” exclaims my University of California, San Francisco, faculty colleague James Fraser to describe his attitude toward using both preprints and journals for communicating his scientific work. Preprints get his work disseminated rapidly (perhaps like the beer, which is served first and puts you in a good mood) and journals provide peer review (the sustenance of the tacos, which might take longer to get out the kitchen). If this California analogy does not work for the international ASCB community, then you can think of saki and sushi or perhaps Bordeaux and baguettes. Amusement aside, physicists have been using preprints and journals for years, with the two providing different services, as described here.

Okay, beer and tacos sound good. But can I, a biologist, order both just like the physicists? Many life science journals, such as Molecular Biology of the Cell, the Journal of Cell Biology, eLife, and the Proceedings of the National Academy of Sciences, have preprint-friendly policies. Nature and Science, which have been working with physicists for years, also allow preprints. Some life science journals (e.g., Cell and its sister journals) have complex policies where editors ultimately decide whether the prospective author can submit a preprint or not. ASAPbio hopes to work with many journals over the coming year so that life scientists who want to use preprints will have more choices and more control. Furthermore, some journals are starting to work with bioRxiv to facilitate journal submission right from the preprint server itself. But what about the scientist who just wants tacos but no beer? That is fine—many scientists will choose to just submit to journals; preprints are a choice and not a mandate.

Concerns That Biologists Have about Preprints

Since preprints are new in biology, there are several concerns about possible unintended consequences:

In summary, as is true of many useful inventions, preprints come with both benefits and risks. But the experiences of arXiv have shown that benefits outweigh the risks and that the risks, while not absent, are manageable.

Changing the practice and culture of scientific communication in biology will require several steps:

Involvement of ASCB and Other Scientific Societies in Preprints

Scientific societies such as ASCB could play very important roles in the development of preprints in biology. Many societies publish scientific journals, and ASAPbio hopes that all journals in the life sciences will adopt a clear policy allowing scientists to post preprints of submitted manuscripts. Of note, ASCB’s journal Molecular Biology of the Cell embraces the use of preprints. Furthermore, preprints open up new opportunities for societies to participate in science communication, for example by engaging their membership in evaluating or highlighting work that appears on a preprint server.

Scientific societies also serve their members by communicating accurate information. Most biologists do not know about preprints or receive fragmented or incorrect information. Conveying accurate information and discussions on preprints through society communications (e.g., newsletters) and at an annual meeting are important actions. Societies also serve their members by crafting and advocating changes in science policy. As an example, DORA has been very influential. We hope that ASCB will catalyze its own discussions of preprints within its leadership and membership and work with ASAPbio in improving scientific communication.

In 2018, we will mark the 10th anniversary of Peter Walter’s “Painful Publishing” article. Let’s hope to have a faster, fairer, and more joyful system of research communication, especially for the many young scientists who deserve something better than what is being offered right now.

Questions and comments are welcome and
should be sent to president@ascb.org.

Ronald "Ron" David Vale, PhD is a professor of cellular and molecular pharmacology at the University of California, San Francisco.