by Andrew Ewald and Mikala Egeblad 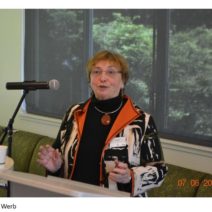 Zena Werb passed away suddenly, on June 16, 2020, leaving behind a profound legacy across several subfields of cell biology. She considered ASCB her scientific home:  She was a member (from 1976 to her passing), past president (2005), and E.B. Wilson medalist (2007). Zena was professor in the Department of Anatomy at the University of California, San Francisco (UCSF) for over four decades and made seminal contributions to the understanding of proteolysis and innate immunity in developmental biology and cancer research. She was brilliant, with a deep understanding of science, courageous in her choice of scientific problems, visionary in her ability to redefine the possible, and convinced that it is an obligation to make the scientific enterprise more just and inclusive. Our postdoctoral training with her ended more than 10 years ago, but like so many other of her trainees, we had kept in contact with her. We miss her dearly. We remember her with a knowing—and sometimes teasing—smile on her face, informed from the challenges of this world, yet optimistic, and always excited by good science and new ideas.

Zena earned her BSc in Biochemistry and Physiology from the University of Toronto and her PhD in Cell Biology from The Rockefeller University, studying with Zanvil Cohn. She then conducted postdoctoral research at the Strangeways Research Laboratory, Cambridge, England. She began her independent career in 1976 in the Department of Radiobiology and Radiology at UCSF before transferring to the Department of Anatomy in 1979. She rose quickly through the ranks, earning promotion to associate professor in 1980 and professor in 1983. She was Vice-Chair of the Department of Anatomy from 1999 to 2017, Director of the T32 Postdoctoral Training Program in Molecular and Cellular Basis of Cancer from 2004–2020, Co-Leader of the Cancer, Immunity, and Microenvironment Program (2011–2016), and Associate Director for Basic Science of the Helen Diller Family Comprehensive Cancer Center from 2016–2020. She was highly prolific, with >350 primary research articles and >100 review articles. Collectively, this body of work is among the most cited in the life sciences, with Google Scholar crediting more than 135,000 citations and an h-index of 171 to her.

Among Zena’s numerous awards are being named a fellow of the John Simon Guggenheim Foundation, the American Association for the Advancement of Science, the Institute of Medicine (National Academy of Medicine), the National Academy of Sciences, the American Academy of Arts and Sciences, the American Association for Cancer Research, and the ASCB. Her named lectureships include the Charlotte Friend Lectureship and the UCSF Faculty Research Lecture Award. In addition, she received an honorary doctorate from the University of Copenhagen, the Alexander von Humboldt Foundation Prize, the E.B. Wilson Medal of the ASCB, the Women in Cell Biology Senior Award from the ASCB, and the UCSF Lifetime Achievement in Mentoring Award. Zena was not one to rest on her laurels or focus much on them. She took the greatest satisfaction from two areas: establishing new concepts in biology and mentoring the next generation of researchers.

Zena is best known for her contributions to revealing the molecular mechanisms by which proteolysis regulates cellular signaling and for uncovering the diverse roles played by proteolysis during development and in diverse disease states. When she began studying matrix metalloproteinases (MMPs) in the 1970s, proteolysis was considered a purely destructive process—a mechanism to eliminate proteins and clear extracellular space. However, she anticipated a broader role for proteolysis, hypothesizing that proteolysis could act as a mechanism of post-translational modification, capable of changing a protein’s function. She had to develop and refine many of the core techniques in the field in order to test this hypothesis. In a series of elegant papers, she demonstrated that MMP cleavage can remove signaling motifs, reveal cryptic signaling motifs, liberate signals from the cell surface or extracellular matrix (ECM), and change the diffusion properties of the protein.

The concept that emerged from these discoveries was that proteolysis regulated a cell’s access to information about its extracellular microenvironment and that this role is critical to the development of most organs. Conversely, dysregulation of proteolytic function underlies the mechanisms of diverse diseases, including diabetes, congenital bone malformations, pancreatitis, and cancer. This work emerged in the context of a multi-decade collaboration with her close friend, Mina Bissell, of the Lawrence Berkeley National Laboratory. One major highlight from this collaboration was the demonstration that transgenic overexpression of MMP3 was sufficient to induce carcinomas in mice.

Zena remained a visionary pioneer throughout her career, fearlessly reinventing herself every few years to work on new technical challenges and to establish new concepts in the field. Over the past 10 years, her focus was chiefly on cancer metastasis, with fundamental contributions to the understanding of how differentiation programs drive invasion and dissemination, the relationship between cancer cells and stem cells, the role of the ECM and immune microenvironment in promoting metastasis, and the application of single cell sequencing to patient-derived xenograft cancer models.

Zena was a demanding, yet supportive mentor who saw the unique capabilities of each of her trainees and worked to help them achieve their individual goals. She was in particular a pioneering advocate for women in science, whether for her trainees, for her colleagues at UCSF, or for the wider scientific community through her work with the ASCB and other societies. She vehemently believed that science is hard and needs the best minds, and that we could not predict where we would find the people capable of driving the next paradigm shift. She was a caring person and gracious hostess, inviting us to her home for lovely—homemade—feasts, taking trainees to the symphony and opera, and baking homemade treats for the lab for each of the Jewish holidays. In virtual memorial services and individual conversations, one memory came up again and again as shared by so many of her mentees and friends: that she truly and individually cared for each of us as persons, e.g., asking about our families in a non-intrusive manner each time we met. These personal relationships served as the foundation on which she would push us to achieve more professionally than we thought ourselves capable of doing. What we loved about her was that you knew you would get the straight truth from Zena; if the idea was bad, she would say so. But, if she thought it was a good idea, worth serious investigation, you knew you were on to something, and might even be able to build your career around it.

Zena attended numerous meetings and gave hundreds of talks over four decades; her list of keynote lectures alone runs to pages, single spaced. But, reflective of her commitment to her favorite scientific community and to mentoring, she would always make time for invitations from graduate students to give seminars and for the ASCB annual meeting. She considered the ASCB meeting to have the best combination of breadth, rigor, and collegiality of any conference that she attended. She served on the Program Committee eight times, chairing it in 1984. She also served on the Public Policy Committee, the Executive Program Planning Committee, the Publications Committee (1991 chair), the Nominations Committee, the E.B. Wilson Award Committee, the International Affairs Committee (2006 chair), and the Women in Cell Biology Committee (WICB; 1998–2003 chair). As one might expect, it seemed that she knew everyone at the ASCB annual meeting and she literally could not walk 20 feet at the meeting without running into someone she knew. This was, in the end, what she treasured most about her multi-decade relationship with the Society: the personal relationships, the chance to catch up with old friends, meet bright early career scientists, hear the very latest research across her broad and diverse interests—and to bring new ideas back to the lab.

We hope with these few words to have given a sketch of the truly remarkable human being, trailblazing scientist, much-sought mentor, treasured friend, and warm person that was Zena Werb. Her legacy is so much more than her publications, her citations, and h-index. Science is richer and more advanced and our world is a better place because of her devoted efforts to make it so.

Andrew Ewald is professor of Cell Biology at the Johns Hopkins School of Medicine.Mikala Egeblad is associate professor at Cold Spring Harbor Laboratory.