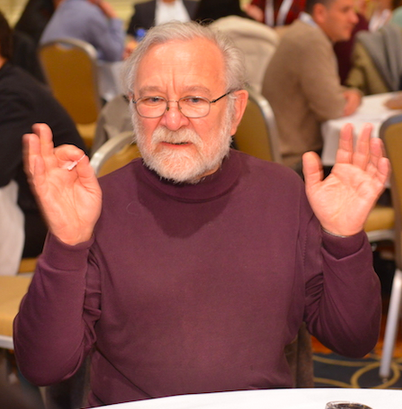 ASCB President Elect for 2016 Peter Walter is best known for his role in the discovery of the unfolded protein response (UPR) but around the Walter lab at the University of California, San Francisco, he is also known for his furniture making skills. For his next woodworking project, Walter might consider a new shelf. On Monday, Walter was named the winner of the Vilcek Prize for Biomedical Research, which comes with $100,000 and a foot-tall acrylic sculpture by the New York graphic artist Stefan Sagmeister.

The Vilcek Prize in Biomedical Science is the creation of Jan and Marcia Vilcek to honor “foreign-born individuals” who are permanent U.S. residents for “extraordinary achievement” in the arts and sciences. The Vilceks emigrated to the U.S. from the former Czechoslovakia in 1965. A physician with training in immunology and microbiology, Jan Vilcek joined the faculty at the New York University School of Medicine where he helped develop the monoclonal antibody-based drug, infliximab, which is widely marketed as the anti-inflammatory Remicade.

It’s been an award-winning year for Walter. Last May, he was awarded half of the $1 million Shaw Award in Life Sciences and Medicine. In September, he won the Albert Lasker Basic Medical Research Award.

Walter will take up the ASCB presidency next January. All going well, Walter will receive the thanks of the ASCB Council and a memorial gavel at the close of the ASCB 2016 Annual Meeting in his home city of San Francisco. The trophy shelf grows more crowded.