Nobel laureate and ASCB member Roger Y. Tsien died August 24 in Eugene, OR, according to an official statement from the University of California, San Diego (UCSD) School of 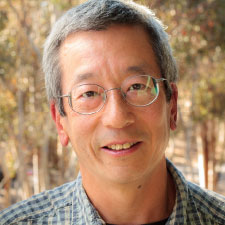 Medicine,1 where Tsien was on the faculty for 27 years. He was 64. Tsien won the 2008 Nobel Prize in Chemistry with ASCB member Marty Chalfie and with Osamu Shimomura for their work in developing green fluorescent protein (GFP) as molecular tags, transforming microscopy and setting off a revolution in cell imaging.

A professor of pharmacology, chemistry, and biochemistry at UCSD, Tsien was also a Howard Hughes Medical Institute investigator. Tsien was a continuous ASCB member since 1987. He gave the Keith Porter Lecture at the 2003 ASCB Annual Meeting and in 2008 was jointly awarded with Chalfie the E.B. Wilson Medal, the ASCB’s highest scientific honor.
“Roger was an amazing scientist who spearheaded fluorescence microscopy through his creative engineering of fluorescent proteins,” said former ASCB President Jennifer Lippincott-Schwartz. “He will be sorely missed by the cell biology community.”

ASCB member and former ASCB Treasurer Thoru Pederson remembers Tsien as outgoing, approachable, and brilliant. They first met in the early 1990s when Tsien gave an invited lecture at the University of Massachusetts Medical School in Worcester where Pederson is on the faculty. After the talk, Pederson found Tsien to be engaging and eager to field practical questions about the caged fluorescent probes that the Pederson lab was struggling to employ. “We interacted by phone and email for several years,” Pederson remembered. “And Roger was extremely generous with his time. He would even look up supply catalog numbers to make sure we were ordering the right materials.”
In the spring of 2008, Pederson served on the ASCB selection committee for the Wilson Medal. By then, GFP was in near universal use and the name of Marty Chalfie, another ASCB member closely associated with the development of GFP, “bubbled up” for the Wilson medal, Pederson recalls. “I pointed out that if we’re thinking about GFP [as the basis of a Wilson award], then we’ve got to think about Roger’s work as well.” He remembers another member of the committee pausing thoughtfully before asking, “Do you know something going on in Stockholm that we don’t?”

That October, the chemistry Nobel went to Chalfie and Tsien. The Wilson committee chair Joel Rosenbaum sent out word that ASCB had scooped the Royal Swedish Academy of Sciences, but the question remained, would Chalfie and Tsien come to San Francisco to give their ASCB lectures, only two days after the Nobel Week festivities ended in Stockholm? Both Chalfie and Tsien appeared at ASCB, a little jet lagged but otherwise ready to give their Wilson talks on GFP. Pederson recalls Tsien at the Wilson dinner afterward, answering questions about his magical week in Stockholm and volunteering to serve as a judge that night for “CellSlam,” ASCB’s stand-up science comedy contest. “That was the most informal and relaxed I’d ever seen him,” said Pederson. Eyewitnesses to Tsien’s performance as a CellSlam judge reported real concern that the Nobel winner was laughing so hard he might actually fall off his seat.

Tsien was born in New York City on February 1, 1952, the child of Chinese immigrants, into an extended family of engineers. He grew up in Livingstone, NJ, and demonstrated a flair for science at an early age, winning what was then the Westinghouse Science Talent Search in 1968 for a project demonstrating how metals bind to thiocyanate. He attended Harvard College on a National Merit Scholarship, graduating in 1972 with a degree in chemistry, and earned his doctorate in physiology in 1977 from the University of Cambridge in the UK. After postgrad work in Cambridge, he joined the faculty of the University of California, Berkeley, in 1982 before moving to UCSD in 1989.

The first green fluorescent protein was discovered in the jellyfish Aequorea victoria by Shimomura, who was at the Marine Biological Laboratory in Woods Hole, MA. Chalfie at Columbia University was the first to demonstrate that GFP, which glowed under ultraviolet light, could work as a molecular tag in a living organism, Caenorhabditis elegans. Tsien explored the biochemistry of GFP and extended the color palette so that different biological processes could be followed at the same time with differently colored GFPs. In a 2008 interview, Tsien said, “I’ve always been attracted to colors. Color helps make the work more interesting and endurable. It helps when things aren’t going well. If I had been born colorblind, I probably never would have gone into this.”