by Susan A. Gerbi and Paul J. Monaco

Ellen Myrberg Rasch, an early member of ASCB who made important contributions to the histochemistry of DNA, passed away on July 31, 2016, at age 89 after a long battle with 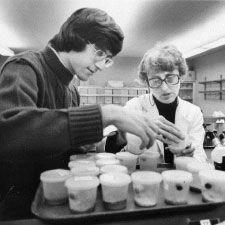 Ellen grew up in Chicago and attended the University of Chicago for her undergraduate and graduate training, obtaining her PhD in botany in 1950. A year later she returned to join the lab of Hewson Swift, first as a postdoc and later as a research associate. Watson and Crick published the structure of the DNA double helix two years after Ellen began her postdoc, but it was already evident that DNA was the hereditary material. Swift introduced Ellen to microspectrophotometry and she was off and running. Ellen developed Feulgen-DNA cytophotometry to measure the DNA content of nuclei from a wide range of organisms, especially insects. She became one of the leading experts in this methodology.

The rule of DNA constancy states that the amount of DNA is the same in all diploid cells of an organism. Ellen became especially interested in exceptions to the rule, as evidenced, for example, by DNA amplification in the “DNA puffs” of the giant polytene chromosomes of the fly Sciara. During her career she also studied mechanisms of meiosis, documented the first known triploid fish species, provided evidence for apomictic (asexual) reproduction in fishes, and determined the absolute haploid genome size in various organisms, especially insects. Her later work explored concepts of DNA endoduplication and chromosome diminution during early stages of copepod development.

Because Hewson Swift was a founding member of ASCB, Program Chair of the first ASCB meeting, and ASCB’s third president, it was natural that Ellen would also become active in ASCB. She served as session chair at several ASCB Annual Meetings (1968–1971), on the editorial board of the Journal of Biophysical and Biochemical Cytology (later renamed the Journal of Cell Biology), and on the ASCB Council (1972–1976). During the same period, Ellen was also a member of the Council of the Histochemical Society, thus serving as a link between the two organizations. Ellen held other leadership positions in the Histochemical Society and later served on the editorial board of the Journal of Histochemistry and Cytochemistry. Her promise as an emerging scientist was recognized by a National Institutes of Health Research Career Development Award (1967–1972). In 1966 Ellen was elected as a Fellow of the American Association for Advancement of Science. She was also a Fellow of the Royal Microscopic Society.

It is important to put Ellen’s accomplishments and honors into the perspective of her era. At that time it was common for a woman to follow her husband to wherever his career took him. That journey took Ellen to the Medical School of Marquette University in Milwaukee, where in 1975 she was appointed the Todd C. Wehr Distinguished Professor of Biophysics, and then to East Tennessee State University, where she became a research professor in 1978. She served as interim chair of the Department of Biophysics in 1986.
Ellen was a mentor to both of us, and we recall her selflessness, her teaching expertise, her good humor, and her love of chocolate. We will miss her.