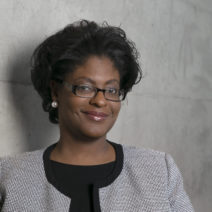 Joyonna Gamble-George during the IF/THEN conference in Dallas Tx on Tuesday, Oct. 22, 2019 at the Perot Museum of Nature and Science. (Michael Ainsworth)

Joyonna Gamble-George is a bit of a Renaissance woman involved in all the letters of STEAM (science, technology, engineering, arts, and medicine). Gamble-George is currently the co-founder, chief operations officer, and chief scientific and medical officer for the medical biotech company SciX LLC. She’s also an AAAS Science and Technology Policy Fellow and Health Scientist at the National Institutes of Health and a member of ASCB’s Diversity, Equity, and Inclusion Task Force.

Her current research involves “studying and writing a perspective paper on contextual factors of drug-seeking behaviors in people. I am particularly interested in how biological, psychological, and social determinants and their interactions influence an individual’s decision-making processes during drug initiation and relapse.” Her hope is to create software applications that could predict and potentially prevent harmful or risky behaviors.

With her company SciX, Gamble-George is developing wearable medical devices that monitor patient heart rhythms and transmit them to healthcare providers or emergency first responders.

“One of the contributing factors to cardiovascular mortality in the U.S. is the inability to monitor heart rhythms of patients with heart disease until they arrive in the emergency room,” Gamble-George said. “Just imagine one second you are having a heart attack or a stroke and you cannot reach the phone. How can you get help? Could you have done something to prevent this from happening? At SciX, we are developing a new health information technology that can monitor and respond to the care of people with heart disease quicker and more efficiently than current methods in the healthcare market using artificial intelligence-driven predictive analytics.”

Gamble-George is also an accomplished artist and graphic designer both for pleasure and to explain science. Her scientific illustrations and designs can be found in journals. She attributes her broad interests and successes to the influence of her grandmother, Menda Gamble Pettway, who raised her on a farm in Alabama.

“As a young girl she instilled in me the importance of acquiring a quality education or knowledge to make better-informed decisions about life,” Gamble-George said. “She also showed me the importance of community service and how it can help an individual build character and find a new passion, promote personal growth and mental health through self-esteem and a sense of accomplishment, while also doing good for the community. Because of my grandmother, I saw how scientific discovery could be seen as a form of humanitarianism, especially when it is used to save lives by creating cures for common diseases that affect people worldwide.”

Gamble-George knew early on that she either wanted to be a scientist, artist, or physician. A high school summer research experience in a chemistry lab, however, strengthened her primary desire to pursue science. Later she earned her PhD in Neuroscience from Vanderbilt University School of Medicine, and numerous other degrees and certifications. It seems clear that she’s accomplished many of her childhood goals. However, along the way, Gamble-George remarks that racism and sexism made progress a struggle.

“As an individual that self-identifies as an ethnic or racial minority and female, I have many times experienced being the ‘only one’ or ‘not in the majority.’ This has been the case when I majored in or worked as a researcher in a STEM discipline,” Gamble-George said. “As a result, I sometimes endured social isolation, limited access to resources or opportunities that could help me advance my STEM career goals, receiving improper scientific credit for work I completed on research projects, and even microaggressions. These experiences have been challenging since people at times do not accept me, even with my educational credentials, talent, and skills as a scientist, because they have assumptions and preconceived stereotypes about what they think a scientist should look like. I have also encountered unsupportive environments where women do not empower one another because they believe there is not enough ‘room at the table’ in STEM, especially when they are underrepresented in leadership roles in STEM disciplines.”

Rather than shrink from these adversities, Gamble-George faces them head on and brings this mindset to ASCB’s Diversity, Equity, and Inclusion Task Force.

At the individual level, changing one’s attitudes about racism or sexism can come from asking challenging questions about race, bias, and stereotypes, she said. Organizational change, however, must take a more structured approach “by increasing representation at different levels of the organization” and “by mentoring underrepresented people to follow in the footsteps of the organization’s leaders and later fill those leadership positions.”

“The other [means of organizational change] is having allies of different ethnic and racial backgrounds to support these measures through mentorship and standing up against policies or actions by others that may be deemed exclusive or uphold racism. Also, the act of increasing representation should be visible through public acknowledgment of the accomplishments of BIPOC (Black, Indigenous and People of Color) in different media outlets,” she said.

You can find out more about Joyonna Gamble-George, including view some of her artwork, by visiting her website www.joyonnagamble.com.