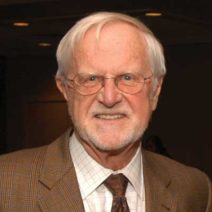 Jim Jamieson, who was a professor of Cell Biology and faculty member of the Yale School of Medicine since 1973 and served as President of the ASCB in 1983, passed away on October 22, 2018, at his home after a long illness. He was 84.

Jim made remarkable contributions in science and education and he held key leadership roles both at Yale and nationally. Jim was born in rural Canada (Armstrong, BC) in 1934, and attended both college and medical school at the University of British Columbia. Jim’s love for science began with an unusual experience for that time: doing basic science research as a medical student. His studies resulted in publication of experiments related to the physiologic regulation of blood pressure and earned him both election to the Alpha Omega Alpha Medical Honor Society and the E.W. Hamber Gold Medal Prize at his medical school graduation in 1960. Wishing to advance his basic science career, Jim moved to Rockefeller University to work with George Palade, an emerging leader in the new discipline of cell biology. He received his doctorate degree in 1966. After also doing postdoctoral work with Palade at Rockefeller, Jim followed his mentor to Yale in 1973 to establish the Section of Cell Biology, where he spent the rest of his academic career. While at Yale Jim held several key leadership roles. These included his service as chair of the newly created Department of Cell Biology from 1983 to 1992 and his election to the presidency of both the American Society for Cell Biology (1982–1983) and American Pancreatic Association (1989–1990).

Perhaps his greatest leadership legacy at Yale are the terms (1974–1983; 1991–2014) that he served as the beloved Director of the Yale Medical Scientist Training Program (the MD-PhD program). Under his direction, Yale’s MD-PhD program more than doubled in size and graduated more than 300 students with dual degrees. Many of the former MD-PhD students who came through the program during the “Dr. J.” era hold academic leadership positions and are engaged in active research careers; some of these graduates were fortunate enough to have studied in Jim’s lab. Jim was recognized as an inspiring and dedicated educator by students in the MD-PhD program as well by students throughout the Medical School. His outstanding teaching was recognized by receipt of both the Bohmfalk Prize for Basic Science Teaching (1999) and the Teacher of the Year Award (2005). In addition to his passion for educating young medical, doctorate, and MD-PhD students, Jim took enormous joy in reminding us of the value of life outside of work. Indeed, one of Jim’s great loves was to share time with students on his sailboat, the CYLAN II, where they joined him in the sometimes successful activity of dodging the rocks, reefs, and sandbars of Long Island Sound.

Among Jim’s many achievements are the seminal discoveries that he made through his research. These are epitomized by the work that he did with Palade for his doctorate and postdoctorate training at Rockefeller University. Those remarkably elegant studies, published in the Journal of Cell Biology 50 years ago, elucidated the cellular itinerary of newly synthesized proteins and revealed the path that they take as they move from their sites of synthesis in the endoplasmic reticulum through the Golgi complex, and finally to storage granules. The discoveries that Jim made as he was beginning his doctorate established the functional relationship between cellular organelles that others had seen for the first time by electron microscopy. His subsequent studies described the specific roles of each compartment in making and processing new proteins. The concepts established by Jim’s work continue to serve as a fundamental paradigm of modern cellular biology. His key contributions to establishing these foundational principles were acknowledged in Palade’s 1974 Nobel Prize lecture.

In addition to his academic contributions, Jim and his family donated very generous tangible support to Yale and to its MD-PhD program. Their financial endowment provided resources for trainees and also created the annual Folkers lectureship, which was donated by the Jamieson family to perpetuate the memory of the father (Karl August Folkers) of Jim’s late wife, Cythia. Folkers was himself a renowned scientist. Jim and Cynthia had two daughters, Anne and Laura. Anne is a businesswomen who lives in Guilford, CT, and Laura is an internist who lives in Portland, OR. Between Anne and Laura, Jim was blessed with five grandchildren. Jim was an outgoing, funny, irreverent, and kind man who will be deeply missed by his myriad friends in the international cell biology community.