Susan L. Lindquist, a self-described scientific risk-taker who pioneered the field of protein folding, died at age 67 on October 27, 2016, of cancer, according to the Whitehead Institute.1 Lindquist served as director of the Whitehead from 2001 to 2004 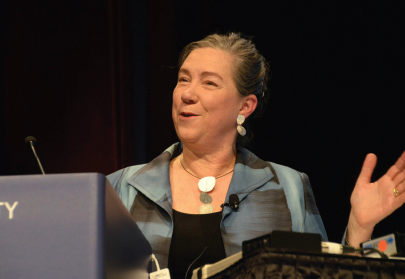 before returning to a research focus in her lab there. A longtime ASCB member, Lindquist was also on the faculty of Massachusetts Institute of Technology (MIT) and the Broad Institute, a joint Harvard–MIT program. She came to Whitehead after 23 years on the faculty of the University of Chicago, where she was a Howard Hughes Medical Institute investigator from 1988–2001.

“Personally, Susan was one of my scientific heroes,” said 2016 ASCB President Peter Walter in recalling Lindquist. “I loved her work and approaches, which combined path-breaking and truly original research with human warmth and engaging compassion.” Walter added, “She did so many things starting in yeast to discover underlying principles, and then taking them all the way to clinical relevance.”

It was as a researcher in what was then the obscure field of protein folding that Lindquist first made her mark with investigations into the role of heat shock proteins. Working in yeast, Lindquist went on to explore protein folding as a nongenetic carrier of inheritance, an idea that was considered heretical when she started her own lab at the University of Chicago after a postdoc there under Hewson Swift. Lindquist completed her doctorate at Harvard University in 1977, working with Matthew Meselson, the legendary designer of the Meselson-Stahl experiment. Her work on protein folding and misfolding has led in recent years to breakthroughs in everything from neurodegenerative diseases to evolutionary biology.

Walter said that Lindquist’s work carried a distinct stamp. “One of the most fundamental discoveries that emerged from her lab was the concept that chaperones such as Hsp90 serve to buffer protein evolution. This allows functional protein modules to evolve in a covert way until the cell develops a need to put them to use. What a wonderful concept, and she always pointed to its resemblance to Lamarckian evolution.”

Despite her top-drawer credentials, Lindquist said in a 2004 interview that she was a slow starter in science.2 Her family background in Chicago was colorful—her father was Swedish-American and her mother Italian-American with almost stereotypical personalities to match, she explained—but her interest in science was purely self-made and largely unfocused. She earned a BS in microbiology at the University of Illinois, Urbana-Champaign, working her way through school as a waitress at a pancake house, a “Polynesian” restaurant, and finally at a cocktail lounge. “Now that was an education,” she recalled. Her grades were a mixture of A’s in science and scraping by with B’s in everything else, but two professors, Sam Kaplan and Jan Drake, saw her potential and steered her toward Harvard for grad school.

Among her many honors, Lindquist won the ASCB’s Women in Cell Biology (WICB) Senior Achievement Award in 2004 and the E.B. Wilson Medal, the society’s highest scientific honor, in 2012. In a video interview recorded at the 2012 ASCB Annual Meeting, Lindquist was asked about her reputation as a risk-taker in science.3 “You have to be willing to be wrong some time and admit that, oh my gosh, that didn’t work,” Lindquist said. “You have to be careful if graduate students get involved in that kind of work that they are not going to be stuck there for years doing something that won’t work. But if you don’t take on high-risk projects when the payoffs could be enormous, I think you’re not fulfilling your obligation to society to empower science to benefit the human condition.”