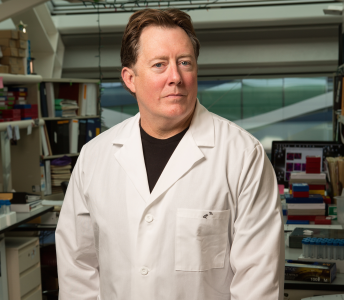 Arthur S. Alberts, who was the Distinguished Scientific Investigator and Professor of Cancer and Cell Biology at the research division of the Van Andel Institute (VAI), died at his home in Lowell, Michigan on December 4, 2016. He was 52. Alberts contributed a large body of work to the understanding of cell signaling and metastasis and was the PI in charge of the Laboratory of Cellular Signaling and Integration at VAI in Grand Rapids, MI. He also taught graduate and medical students in the Department of Biochemistry and Molecular Biology at Michigan State University. Alberts earned both his bachelor’s degree (Biochemistry and Cell Biology, 1987) and a doctorate (Physiology and Pharmacology, 1993) from the University of California, San Diego. He was a Howard Hughes Medical Institute International postdoctoral fellow in Richard Treisman’s Transcription Laboratory at the Imperial Cancer Research Fund, Lincoln’s Inn Fields (now the London Research Institute–Cancer Research UK). From 1998 to 1999, Alberts was the Carol Franc Buck Fellow at the University of California, San Francisco Cancer Research Institute. Alberts had been a member of ASCB since 2000. His colleagues at VAI remember him as a “passionate, deeply inquisitive soul who was dedicated to the purity of science and to mentoring the next generation of scientists.”