Present at the Inception 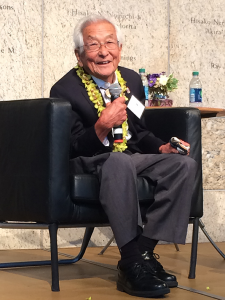 Ito came into cell biology in the mid-1950s just as EM was making visible for the first time the structural components and the dynamic nature of the cell. One of Ito’s key discoveries, according to HMS colleague Elio Raviola, was that both actin and myosin were required for motility in a non-muscle cell, a finding that helped open a new field in cell biology.1 Ito’s co-author on that paper was a young Harvard medical student, Thomas Pollard, who would go on to widen our understanding of the mechanisms of cell motility. Pollard recalls that Ito’s main work as a professor of anatomy at HMS focused on defining the structure and function of the cells lining the gastrointestinal track, including the glycoprotein coating of these cells, a material known at the time as “Ito’s fuzz.” Ito was one of the first to document the cellular damage that alcohol and aspirin can cause to intestinal muscosae.

Ito acquired his skills in EM directly from Don Fawcett, who learned from the founder of modern cell biology, Keith Porter. With a PhD in biology from what was then Western Reserve University in Cleveland, Ito joined the Fawcett lab at Cornell Medical School in 1955. When Fawcett became chair of the Anatomy Department at HMS in 1960, Ito joined him in Boston. When Fawcett went to Chicago in 1961 to the first Annual Meeting of the ASCB, Ito went with him to present a paper on “The Persistence of Cellular Fine Structure after Death.” The Chicago trip made Ito one of the first 844 members of the ASCB and Fawcett the first elected ASCB President. (Ito remained a regular ASCB member until 1999. In 2009, he made a major donation in honor of his mentor Fawcett. When ASCB started The Cell: An Image Library in 2009, Ito donated a large number of his EM images.2)

Ito retired from HMS in 1990 as the James Stillman Professor of Comparative Anatomy but continued daily visits to the HMS interdepartmental EM facility for the next 24 years. Each morning, he offered on-call advice to anyone struggling with an EM problem. Ito always came early so he could be gone by 9:30 am and not “interfere” with other researchers. Over the last year, Ito’s HMS visits dropped to once a week, but he continued at home, preparing EM samples on his personal ultramicrotome, an instrument which came down to him directly from its designer, Keith Porter.

Ito’s long scientific career came about against even longer odds. Susumu Ito was a Nisei, an American born in 1919 to a family of what he later described as “dirt poor” Japanese immigrant sharecroppers in California’s Sacramento Valley. His early schooling was in ethnically segregated, ramshackle, one- and two-room schoolhouses. Only when his father took over a bathhouse in nearby Stockton did Ito attend a real school. He bloomed at Stockton High School where Ito was treated fairly in class but shut out of all social activities. A teacher, a Mr. Snook, who knew everything about snails in the Sacramento Valley, kindled Ito’s interest in biology. Ito passed the entrance exam for the University of California, but his father felt that Berkeley was not for the children of Japanese agricultural laborers. His father insisted that Ito become an auto mechanic instead. In 1940, Ito was fixing brakes in an all-Japanese garage in Stockton, CA, when he was drafted and sent to fix brakes in a U.S. Army garage near Riverside, CA.

On December 7, 1941, the Japanese Imperial Navy attacked the U.S. Pacific Fleet at Pearl Harbor in Hawaii. Ito’s parents and two American-born sisters were sent as enemy aliens to a federal internment camp in Arkansas where they were kept behind barbed wire and in primitive living conditions for the duration of the war. The Army took away Ito’s rifle and sent him to fix brakes at Fort Sill in Oklahoma. To escape the tedium and to express his very real patriotism, Ito volunteered in 1943 to become an artillery spotter in the all Japanese American 442nd Regimental Combat Team. Fighting in the mountains of Italy and then France, the 442nd would sustain massive casualties while becoming the most decorated unit in U.S. military history.
Ito came through nearly two years of intense combat, physically unscathed but haunted for life by what he’d seen. As a forward spotter, Ito’s place was often ahead of American lines so he could call down artillery on the enemy’s hidden positions. Forward spotters did not last long. And yet Ito survived to earn a battlefield commission as a second lieutenant. In France, he took part in five days of savage fighting in the thickly forested Vosges Mountains to rescue a “lost battalion” of American infantry cut off in the rugged terrain. Ito was one of 25 out of 371 in the two companies he commanded to emerge from the Vosges forest unhurt. In that action, Ito earned a Bronze Star and a lifelong dread of deep woods. In 2011, Ito visited the White House with other 442nd veterans to receive the Congressional Gold Medal, the nation’s highest civilian honor, from President Obama for their regiment’s rescue of the Lost Battalion.
As German resistance collapsed, Ito’s field artillery unit, the 552nd, rushed ahead into southern Bavaria where on April 27, 1945, they overran a satellite of the Dachau concentration camp, liberating 3,000 barely alive prisoners. The sights of that day never left him.

Ito took something else to the war, an easy-to-carry and easy-to-hide Agfa Memo 35mm camera. Although officially against regulations, Ito’s camera went with him, unmolested, through training, on leave, in combat, and to Dachau. At night, he would crawl under a blanket to diligently wrap the exposed film in foil, waiting to develop and mail home the negatives to his family interned in Arkansas. The negatives were safe there. After the war, Ito printed many, but many more sat unseen for decades.
Demobilized, Ito joined his newly released family in Cleveland, OH. There he met and married his wife, Minnie. They would have four children and share their lives until her death in 2012. But back in Cleveland, Ito quickly embraced the GI Bill and his long-postponed interest in biology to earn a BS from a local YMCA college. That led to Western Reserve for his doctorate. Then came Don Fawcett, EM, and his own lab at HMS.

In 1965, a first-year medical student named Tom Pollard talked his way into the Ito lab. Tom Pollard and his wife Patty, who was working in a bookstore but about to start grad school on her own, were newcomers in Boston. Professor Ito surprised Patty one Friday afternoon with a phone call inviting the Pollards to his house in Wellesley for a family dinner on Sunday. Could Patty perhaps provide a few of those brownies that Tom had been bringing to the lab? Would they allow Professor Ito, the former mechanic, to have a closer look at their new and highly exotic Volkswagen Beetle?

Thus began a 50-year friendship. The Pollards kept in touch as they moved from HMS in Boston to John Hopkins in Baltimore, the Salk Institute in La Jolla, and finally back to New England for Yale. In conversation, Ito had not hidden the facts around his hardscrabble roots nor his wartime experiences but in later years, he became less reticent in talking. The pictures helped, according to Patty Pollard. Historians and then the public have become fascinated by the Japanese American experience in WWII, dwelling on the irony of the internment camps and the 442nd. Ito’s pictures, all of them, printed and unprinted, were hailed as a major treasure by historians at the Japanese American Museum in Los Angeles.

Last summer, a large exhibit of Ito’s clandestine World War II photo album opened at the museum in LA’s Little Tokyo neighborhood near downtown. The guest of honor was the photographer himself, age 95, who capped the visit to LA by driving off in a red convertible, top down, with his grandson, heading 400 miles north to visit his native land around Stockton.
Patty Pollard says that Ito was never bitter about his childhood or about the way his family was treated while he was in the Army. Still he remembered how odd it was, especially the time he took “home” leave before shipping out for Italy. Home was a government internment camp in Arkansas. Ito told her, “There I was, a soldier in uniform ready to fight at the front lines for the United States, approaching the gate where a white soldier holding a gun was making sure my Japanese American family stayed in prison throughout the war. It was shocking to see my family behind barbed wire, living in one very small room, and having to stand in a long line to use the shared bathroom.”