Exploring our microscopic world at the USA Science and Engineering Festival 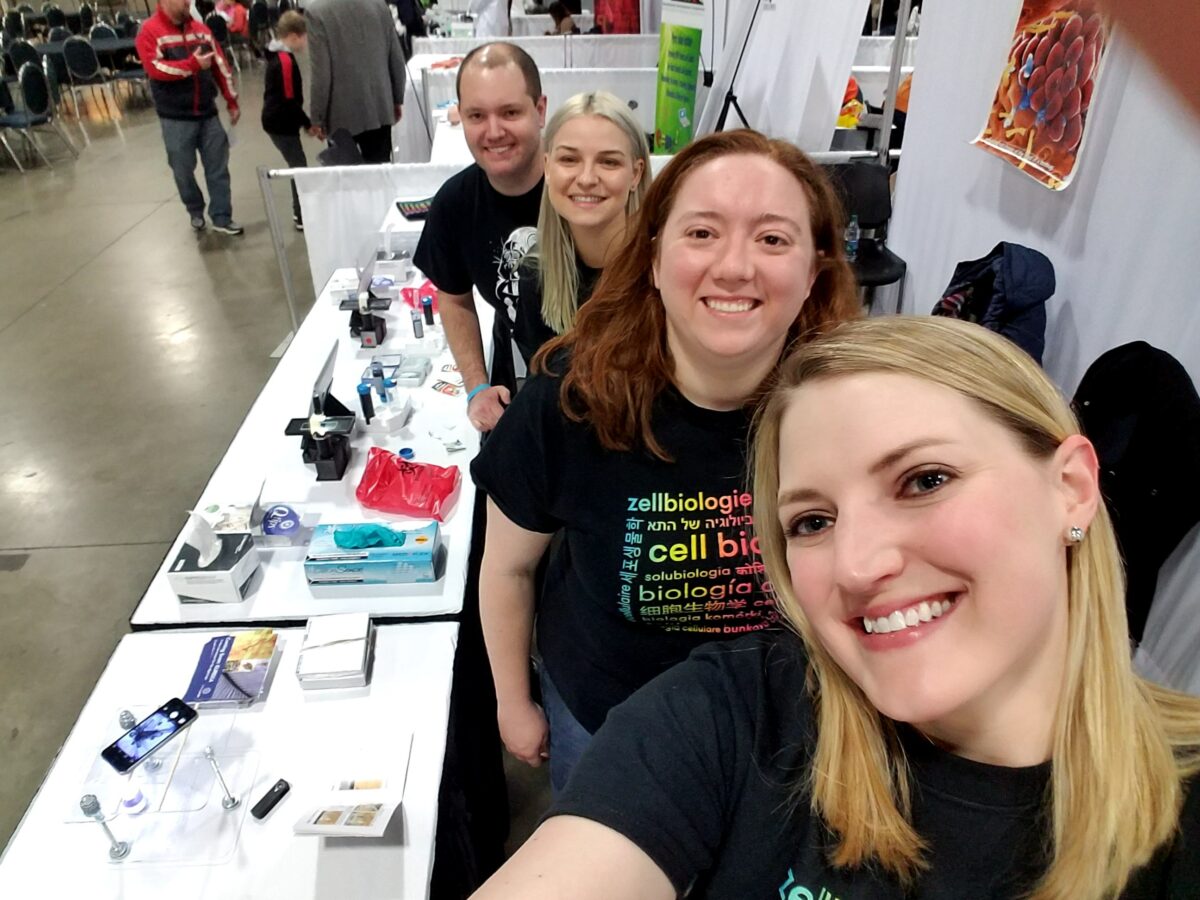 In early April, Washington, DC, was swarming with tourists for the annual Cherry Blossom Festival, but that wasn’t the only event that brought families to the nation’s capital. At the same time, the USA Science and Engineering Festival (USASEF) took place in the Walter E. Washington Convention Center just two miles north of the Tidal Basin, the focal point of the infamous blossoms. The biennial event is the largest STEM festival in the nation and brings together over 350,000 attendees and hundreds of STEM-focused organizations and groups of all disciplines, ranging from NASA to 23andMe and of course, ASCB, to demonstrate interactive science activities for people of all ages. In fact, at the ASCB booth, we saw an estimated 3,000 people, including almost 1,000 children and students. Members of ASCB’s Committee for Postdocs and Students ran the booth and encouraged the attendees to “discover the wonder in cells.” 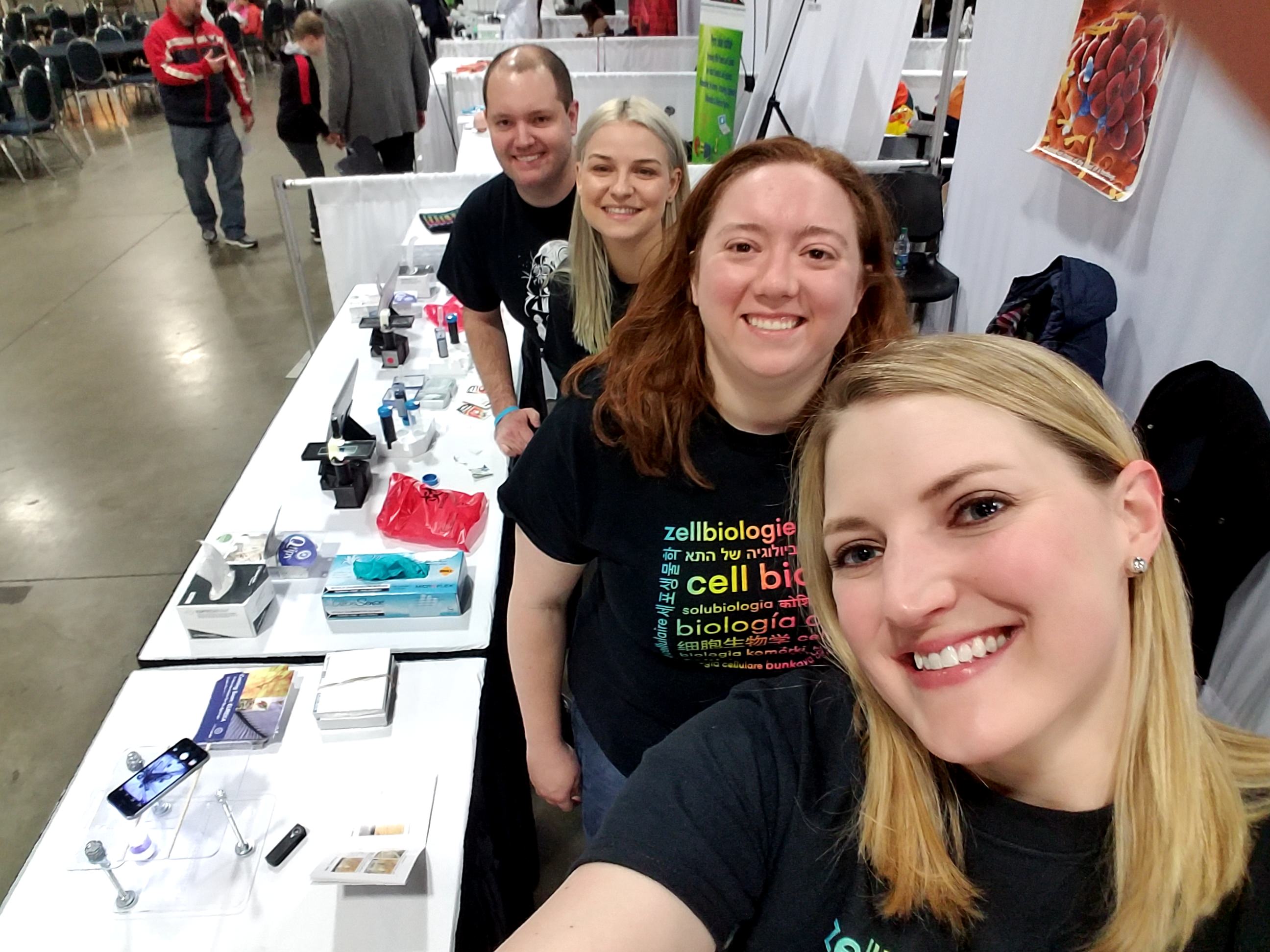 Selfie fun at the USA Science and Engineering Festival. From front to back, Ashley Rowland, Emily Summerbell, Caitlyn Blake-Hedges, and Scott Wilkinson.

Our exhibit was full of iPhone and iPad light microscopes that were loaned by the Fletcher Lab at UC Berkeley. We set up the iPhone microscopes to look at some prepared slides as well as some everyday items, including our own clothes and even a dollar bill. The prepared slides varied from human tissue samples to bacteria to plant organs, some of which we weren’t very familiar with. We quickly googled some of the samples we had and ended up learning some new facts ourselves. One of our favorite slides to show people was the Hydra, which is a freshwater organism related to the jellyfish that has regenerative capabilities and never ages. We had never heard of a Hydra before (besides the mythical creature), but some of our visitors had, and those who hadn’t were fascinated to learn about this tiny squid-like creature that scientists are studying to learn more about aging. Our visitors were also amazed when we showed them all the small details you could see on the dollar bill, like George Washington’s eye, or what the skin on the back of their hand looked like in creepily-enlarged detail. Some of the kids were very hands-on and grabbed the iPhone right away to look at everything on the table, but others were a little shyer and preferred to just watch what we could show them. However, the favorite activity by far was playing with the iPad microscopes.

Thanks to an external objective repurposed from a standard light microscope and a small flashlight as the light source, our iPad microscopes had a stronger magnification than the iPhone microscopes and we were able to see even smaller things. We set the iPad microscopes up to visualize our visitors’ cheek cells with the help of a cotton swab and a drop of methylene blue. Practically every kid’s eyes lit up when we asked them if they wanted to look at their very own cells. Some preferred to look at their parents’ instead, but they still were fascinated the moment we put that slide onto the microscope. The first thing we usually saw was a bunch of debris floating around that we warned was probably bits of their breakfast or lunch (which usually made them giggle). Sometimes we saw some air bubbles that were trapped when the coverslip was placed on top, which people thought were the cells at first. But after a little searching, we found some small blue spheres with a dark blue dot in the center—their cheek cells! We explained how the positively charged dye stains the negatively charged DNA molecules in the nucleus of the cell, so that’s why you can see a dark center in all of the cells. Some people had large clumps of cells while others had only a few, depending on how hard they rubbed their cheek. This activity was definitely the biggest hit at our table, and we even had visitors come up to us because they had heard from other people how they could look at their own cells. 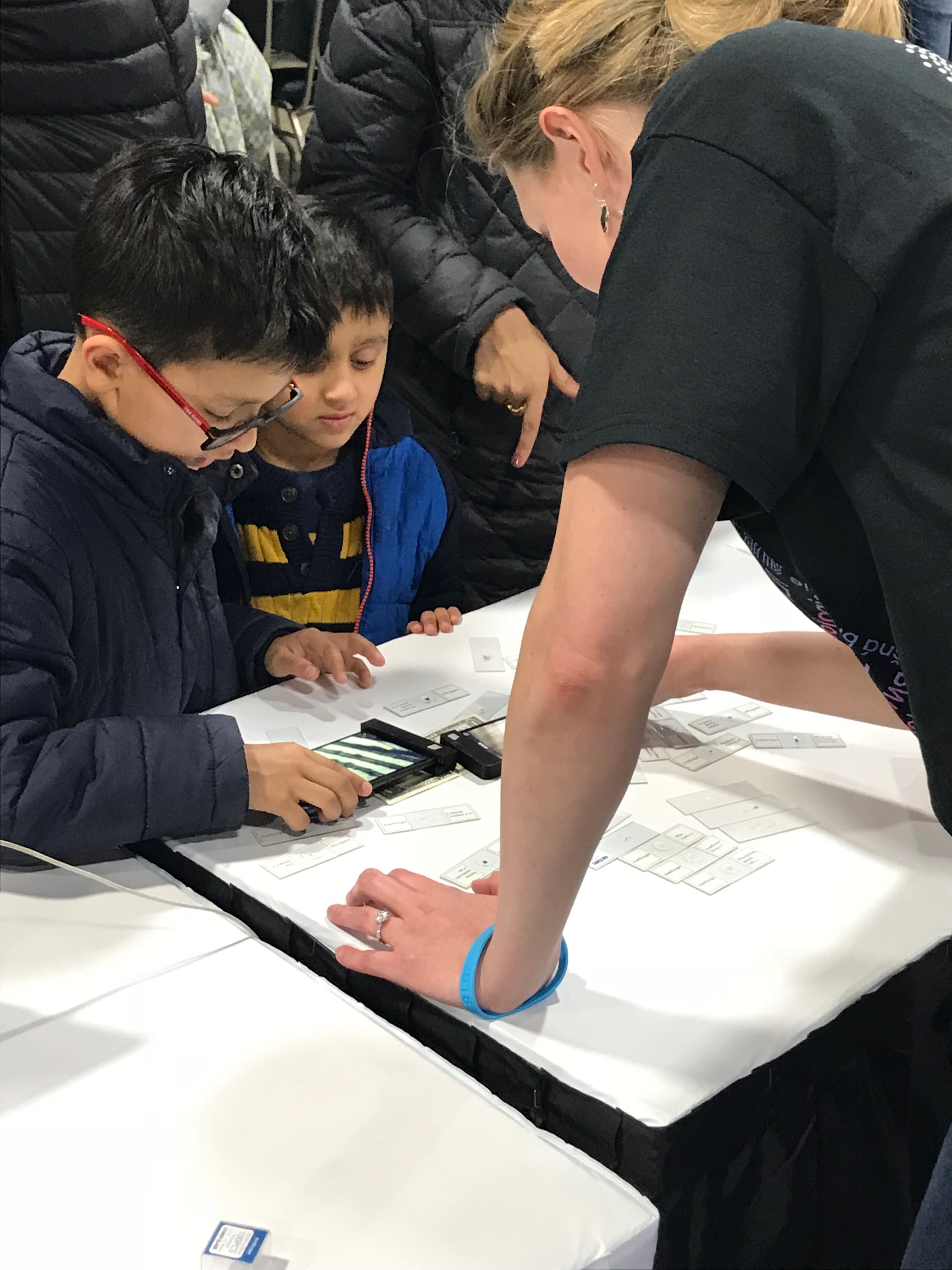 Ashley Rowland helping some USASEF attendees look at the finer details of a dollar bill using the iPhone microscopes.

The majority of our visitors were young children in elementary or middle school, but we also had a good number of fascinated adults who wanted to learn something new. We even had a high school student come up with his family and ask us about our career paths and for advice on how to get into the field of cell biology. Every single person at the festival came to learn something new about science, even the exhibitors like us, and it was a great experience to interact with other science-curious people. Science outreach events are enjoyable not only because we can share our love for science with other people, but because we learn something new in return. The USASEF was no exception! We are looking forward to the ASCB booth at the next USASEF in 2020 and, in the meantime, discovering new and exciting ways to share our love of cell biology.

Caitlyn Blake-Hedges is a PhD student in the Biomedical Sciences Department at Florida State University. She works in the lab of Dr. Timothy Megraw, investigating the function of the centrosome in development and disease using Drosophila as a model. In her free time she enjoys yoga, running, Netflix, and watching college football (Go Clemson!). Email: caitlyn.blake-hedges@med.fsu.edu