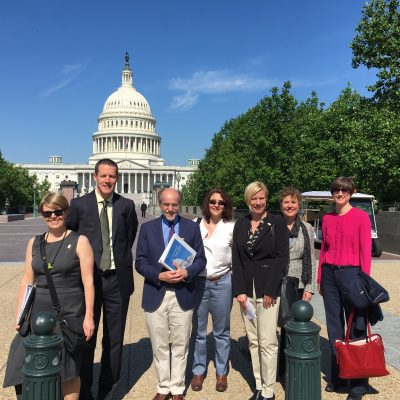 Members of the American Society for Cell Biology’s (ASCB) Council met May 15 and 16 in Bethesda for their spring business meeting as well as to meet with members of Congress on May 17. The Council discussed membership, the Society’s peer-reviewed journal Molecular Biology of the Cell (MBoC), programming at the annual meeting, the usefulness of preprints, new schemes in federal science funding, and many other issues of importance to ASCB members. They also approved the Society’s strategic plan mentioned by ASCB Executive Director Erika Shugart in the President’s Column in the June ASCB Newsletter. The following are some highlights:

New fee structure for MBoC
The Council voted to modify the publishing fee structure for MBoC. The journal will switch from a per-page to a flat-fee model. Mark Leader, ASCB’s Publications Director, said that the new payment structure will allow MBoC authors to “tell a complete story” without feeling constrained by page limits. Fees will now be $2,100 for articles of any length and $1,500 for brief reports (10 or fewer pages). In addition, authors may obtain immediate open access for their publications, a feature not previously offered by MBoC but sometimes required by certain funding agencies, for a fee of $1,000. This will allow a new group of authors to publish in MBoC. All ASCB members receive a 20% discount on these charges. MBoC revenues are a major source of support for the Society’s activities such as outreach, career development, and science advocacy.

Education Committee co-chairs
When Education Committee Chair Sue Wick’s 2nd term ends in December 2017, the Council voted to pass the baton to co-chairs Erin Dolan and Melanie Styers. Dolan is the Georgia Athletic Association Professor of Innovative Science Education in the Department of Biochemistry and Molecular Biology at the University of Georgia and, since 2010, has been the editor-in-chief of ASCB’s education journal CBE-Life Sciences Education. Melanie Styers is an associate professor in the Department of Biology at Birmingham-Southern College in Alabama and has been a member of ASCB since 2002. She has been involved with the Education Committee since 2014. Dolan and Styers applied to co-chair the committee together and vowed to blend their experience as both educators and basic science researchers to re-align the efforts of the committee toward strategic plan priorities

Professional development and the Minorities Affairs Committee (MAC)
Sydella Blatch, ASCB’s Diversity and Professional Program Manager, discussed how the MAC has been streamlining its workload through the development of standard operating procedures. In addition, it is collecting publishable data on the effectiveness of ASCB’s various professional development programs, which will help steer the direction of these programs toward improved outcomes and help secure additional grant funding.

Committee reports
The Committee for Postdocs and Students (COMPASS), Public Information Committee (PIC), and Public Policy Committee (co)-chairs presented updates on their group’s activities. Co-Chairs Courtney Schroeder and Pinar Gurel of COMPASS described their group’s idea of launching “Ask a Cell Biologist” bar night, where participants would wear t-shirts that invite the public to ask them scientific questions. Lee Ligon of the PIC said her group is developing science communication outreach toolkits that will be available to members online. Toolkits will cover such topics as how to talk about your research, difficult topics, videos/multimedia, using social media to promote your science, and others. Public Policy Committee Chair Connie Lee shared several ideas from the committee for potential white paper topics. These include the future of organoids in medical research and diagnostics; data storage, security, and management; and openness in science (or how science is done, changes in publishing workflow, and how results are shared with the public). The Council prioritized the organoids topic for an upcoming white paper.

Preprints
In the final hours of the Council’s first day of meeting, they had a lively discussion on the use and future of preprints in the flow of communication among scientists and in the pathway to peer-reviewed publishing. David Drubin, editor-in-chief of MBoC, moderated a panel discussion on preprints. Ron Vale, professor in the Department of Cellular and Molecular Pharmacology at University of California, San Francisco/HHMI (who joined via phone) is on the Board of Directors of an initiative called ASAPbio. He was joined by Jessica Polka, executive director of ASAPBio, and Rebecca Alvania, executive editor of The Journal of Cell Biology (JCB). Alvania explained that, although very few (~2%) JCB authors shared preprints, her journal has no policy that precludes posting preprints on a server or referencing them in published papers as a footnote. She said that the meta-data available in preprints tend to reveal the “lifecycle of a researcher’s project rather than the life cycle of a journal article.” Polka contended that the publishing process can be slow and that preprints provide rapid access to findings many months or even years before peer-reviewed articles reach the scientific community. Polka explained that preprints help researchers “accelerate discovery, find collaborators, gain visibility, and demonstrate productivity (for funding purposes or career advancement)” more effectively than the traditional publishing work flow.
Federal funding
The Council also had a spirited exchange with Jon Lorsch from the National Institute of General Medical Sciences (NIGMS). Lorsch reviewed the new NIH policy called Grant Support Index (GSI), which aims to more widely distribute taxpayer funding of science by limiting additional grant support for already well-supported principal investigators. Lorsch provided evidence that research groups with more funding did not necessarily translate into more productivity. Council members expressed concern that mid-career and senior investigators with large grant portfolios could be forced to abandon promising, but complex, projects before they yielded usable results with the new funding model.