The beloved Celldance video program is back for 2017, with more dazzling cell videos—reminding us of the stunning beauty as well as the practical significance of cell biology research. Celldance is a program supported by the ASCB Public Information Committee to promote public engagement and education in cell biology, as well as to help cell biologists develop their skills in video-based science communication and storytelling.

Every year the ASCB chooses two or three proposals from those submitted by member labs across the world and awards each of them a $1,000 unrestricted production grant to turn its research into a short film. The 2017 selections feature research from the labs of Guillaume Duménil and of Dyche Mullins with Lillian Fritz, who describe their projects below. This year’s Celldance will take place with generous support from PLOS. 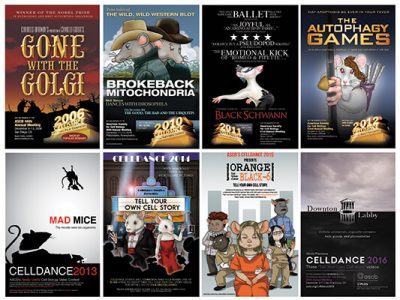 Posters advertising past Celldance videos are favorites of staff and members alike!

Guillaume Duménil Lab, Institut Pasteur
Our lab studies infections caused by the Gram-negative bacterium Neisseria meningitidis, also called meningococcus, which are responsible for meningitis and sepsis. We would like to encourage medical doctors, young researchers, and private companies to engage in research aiming to treat and prevent these two severe conditions.
Infections can be viewed as a story and are well adapted to a video format. Pathogens typically have an entry point (respiratory, skin, wound, etc.) and travel through the body, sometimes large distances, to reach their particular site of proliferation, where they trigger damage. Our research is largely based on different imaging techniques that will serve as the basis for these videos.
In the case of meningococci, bacteria access the bloodstream, adhere to the endothelium, proliferate, eventually fill the vessel lumen, and trigger vascular damage that characterizes the disease. This bacterium has developed remarkable strategies to carry out this sequence of events. For instance, bacteria wrap themselves in host cell plasma membrane to avoid being flushed out by the blood flow. Also, bacterial clusters have biophysical properties similar to honey that allow them to adapt to the complex morphology of the human microcirculation.

Dyche Mullins Lab, University of California, San Francisco; Lillian Fritz-Laylin Lab, University of Massachusetts, Amherst
Movement is fundamental to life—from the tiny twitches of motor molecules to the swimming of blue whales. Our labs study the movement of individual cells that crawl through complex environments, and we try to understand how these cellular movements are linked to the creation and growth of cytoskeletal protein networks inside the cells. We recently collaborated with Eric Betzig’s lab to use his lattice light sheet microscope to make 3D images of fast-crawling cells. To make sense of these large and complex 3D images we also collaborated with groups led by Thomas Ferrin and Graham Johnson, who helped us visualize and analyze the data. The resulting 3D movies of crawling cells were so beautiful that we decided to share them with as many people as possible, and so we are making a movie for Celldance. We can’t wait for the premiere of our film at the meeting in December!