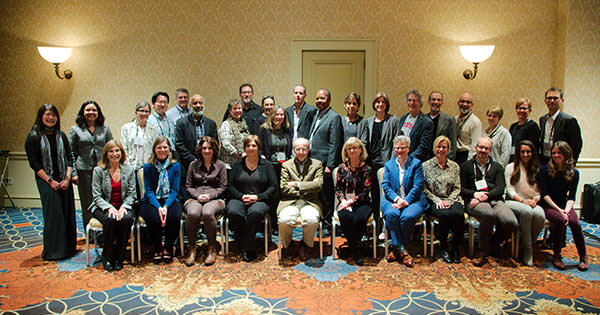 The ASCB Council met December 1, 2017, prior to the ASCB|EMBO Meeting in Philadelphia. The day was jam-packed with updates from staff and committee chairs. The morning kicked off with a welcome to new Council members whose terms began January 2018. They included ASCB President-Elect Andrew Murray; Secretary Kerry Bloom; Councilors Janet Iwasa, George Langford, Mike Ehlers, and Julie Theriot; and Treasurer Gary Gorbsky, who is serving a second term.

David Drubin, Editor-in-Chief of Molecular Biology of the Cell, gave an update on the journal, noting that the quality of papers submitted has remained high. There was a discussion about ways to further promote the journal among members and the scientific community at large and to increase submissions.

The Council approved the 2018 budget and the draft program for the 2018 ASCB|EMBO Meeting, which is slated to occur in San Diego from December 8–12. Council also voted to reduce the frequency of the ASCB Newsletter from eight to six issues per year. This will help reduce the considerable cost of printing and mailing the Newsletter and recognizes that the print publication’s role has changed with the development of the online ASCB Post and other electronic means for the Society to communicate rapidly with its members.

What’s Next in Publishing?
After lunch the Council hosted a discussion “What’s Next in Publishing?” with invited panelists Bodo Stern (HHMI), Annette Thomas (Clarivate Analytics), and Darla Henderson (American Chemical Society [ACS]). Some of the questions considered during the panel discussion included, What are opportunities for societies to improve peer review? and Should ASCB look at new approaches to publishing?

Stern said he’d seen a troubling trend among young researchers where they perceive the need to publish in specific journals to attract funding and jobs. He added that the model whereby journals control what gets published should be replaced with a new model for publishing whereby authors decide what and when to publish. This model proposes that authors improve their work based on peer reviews before they publish, that peer reviews are published alongside the published work, and that editors serve as curators assigning “merit badges” to the best papers. Over time, Stern said, this increased transparency would improve the quality of scientific publishing and ultimately the academic incentive system.

During her career with the journal Nature, Thomas launched several subspecialty journals. Through her work at Clarivate Analytics, she has investigated the publishing and peer review process. She has discovered that the reviewer pool is not keeping up with the author pool, which has delayed the publishing of quality research. Thomas noted that, while the advent of open-access journals has allowed for more research to be published, the peer review process has lengthened, the consistency of peer review has gone down, and the potential for scientific fraud has increased. Furthermore, she said, that while “peer review is the heart of scientific communication,” geographical, gender, and racial bias among reviewers persists and that no real incentives to participate in the peer-review process exist. Her hope is that scientific societies will play a greater role in encouraging peer review.

Henderson described some of the publishing programs offered at ACS, including options for authors regarding payment in an e-commerce system, a rewards program where authors received credits to publish open access, fully open access, and hybrid open access journals, publication embargoes and delayed open-access, and licensing. ACS editors (practicing research scientists) also have the option to vote for certain articles to earn “editor’s choice,” receiving an ACS-sponsored open access license (no charge to authors), and becoming a coveted distinction that authors add to their resumes. Her experience has shown that even delayed open-access journal articles are downloaded more than non–open access articles. She also has noted that many research funders are encouraging or even requiring preprints of research, and therefore the majority of editors at ACS have changed the policy that barred articles previously posted as preprints from being published in certain of their journals. ACS now also has launched its own chemistry preprint server.

Committee Updates
Lynn Marquis, Director of the Coalition for the Life Sciences, described some of the means by which she and leaders in the scientific community communicate with elected officials about important issues around federally funded research. Some of these methods include the Congressional Biomedical Research Caucus Briefings and Capitol Hill Days.

Connie Lee, chair of the Public Policy Committee (PPC), and Kevin Wilson, ASCB’s Director of Public Policy, described the pressure they have been putting on Congress regarding the taxation of graduate student tuition waivers and immigration restrictions. ASCB’s PPC has been directly involved in assisting international members with visa complications. During the development of the ASCB Strategic Plan, PPC presented the idea of forming a political action committee (PAC) to fund those members of Congress who have championed science. However, Wilson explained that to create a PAC, ASCB would have to create a separate nonprofit, 503 (c4), to administer it, which would be cost prohibitive. Further discussion of PAC formation was tabled.

Lee and Wilson also discussed the development of the draft of ASCB’s position on the new National Institutes of Health Next Generation Researcher Initiative and urged the Councilors to provide feedback and input. A lengthy discussion ensued with Wilson agreeing to revisit the issue until the Society’s position can be defined.

During the Membership Committee and International Affairs Committee updates, Councilors discussed the idea of offering alternative membership models based on what time of year a person joined as well as offering reduced membership fees for scientists residing in countries classified as low income by the World Bank. The council voted to support reduced membership based on these criteria, beginning in 2019.

Minorities Affairs Committee co-chair Veronica Segarra explained how the ASCB has collaborated with other scientific societies and organizations to increase diversity in the life sciences and expand the network of junior faculty mentors and mentees. She said she hopes these partnerships will lead to further inter-society collaborations. Segarra reported that the committee has applied for renewal of its current National Science Foundation Innovative Programs to Enhance Research Training (IPERT) grant as well as sought out alternative sources of funding to be used for career enhancement programs.

Education Committee chair Sue Wick reported the success of the Promoting Active Learning and Mentoring (PALM) Network, a one-on-one mentoring program for biology educators who want to employ evidence-based, active learning techniques in their classroom. Wick said she was excited to report that ASCB had worked with other professional societies to identify many mentors and mentees and that the network had greatly expanded.
Public Information Committee chair Lee Ligon discussed the success of the Celldance and Elevator Speech Contest programs. She also explained the development of five science communication and outreach toolkits that will be made available to ASCB members.

COMPASS co-chairs Pinar Gurel and Courtney Schroeder informed the Council of the enthusiasm on the part of participants in Ask a Scientist Bar Night, which was held on Saturday, the day after the Council meeting. They explained that if the event is held in the future, it should be moved to a less busy bar night.

The meeting concluded with President Pietro De Camilli presenting certificates to the outgoing Councilors and Officers, including Kathy Green, Tony Hyman, Denise Montell, and Sam Reck-Peterson, as well as to Ira Mellman, who was not present.