A Long Way to Give a Lecture—Avery August’s Road to the E.E. Just Lecture at ASCB/IFCB 2014 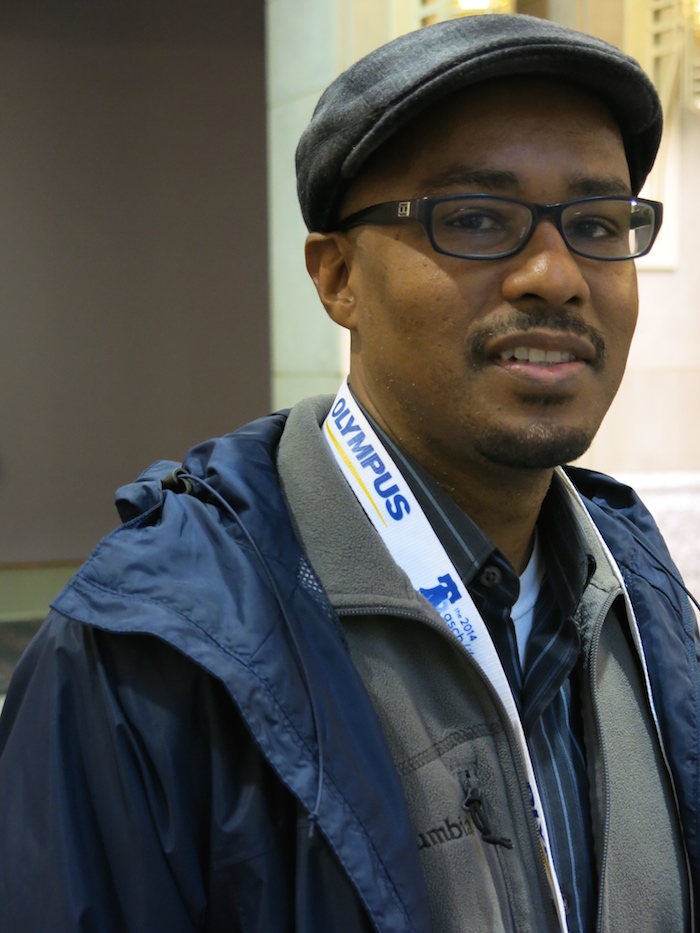 Avery August at ASCB/IFCB 2014 will give the E.E. Just Lecture this afternoon. ASCB Photo by John Fleischman

Avery August who will give the E.E. Just Lecture at 3:00 pm at the 2014 ASCB/IFCB meeting has traveled a long way to give today’s talk in Philadelphia. By land, it was only from Ithaca, NY, where he is Professor and Chair of the Department of Immunology at Cornell’s College of Veterinary Medicine. But metaphorically, August has come great ways to reach the ASCB meeting via immigration, South Central Los Angeles, a GED, community college, and a perilous journey through higher education to a PhD. The E.E. Just Lecturer is picked by ASCB’s Minority Affairs Committee to honor an outstanding minority life science educator or researcher.

August was born in the Central American country of Belize to a teenage mother with great ambitions for her son. Initially, a Peace Corps teacher fanned his early interest in biology. But August had no idea that you could make a living doing science, so he announced at home that he would be a doctor. That seemed unlikely in Belize so his mother immigrated to the United States (“Initially illegally and then legally,” he explains) and brought him over to the land of opportunity. Unfortunately it was South Central Los Angeles in the mid-1980s when the crack epidemic and gang violence made daily life a war and a scientific career an unlikely outcome for August. He dropped out of Los Angeles High School in the 11th grade, taking his chances on getting his GED. He still has that diploma framed. “It was my ticket to being able to register at a community college,” August writes. “At the time, I knew no one who had gone to college in the United States and had no guidance on the process.”

August made it through two years of community college and then transferred to California State University, Los Angeles, to take a vocational degree in medical technology. There, his organic chemistry professor, Costello Brown, hauled him into the office. “He (Brown) then said: ‘Do you want to do urine analysis for the rest of your life?’ He suggested I try to get some research experience in a lab and go to graduate school. This was the first time I had ever heard of this option.”

To read August’s CV today, it would seem like the standard “up by the bootstraps” tale of American gumption. Except it wasn’t. August points out the key points along the way, a shortterm lack of money or longterm mentorship could easily have deflected him away from science. The difference came from scholarships and support programs such as the National Institutes of Health (NIH)-funded Research Infrastructure for Minority Institutions that allowed August to cut his outside work hours and join the research lab of another Cal State professor, Phoebe Dea. Programs like these that support underrepresented minorities (URM) in science are critical for students like himself, says August. Even with Brown’s remark about “urine samples,” August says that after getting his bachelor’s, he would have cheerfully gone on to a predictable but relatively well-paid career as a medical technologist only he couldn’t afford to give up fulltime work in order to take on the year-long required internship to be certified in California. For August, Cornell’s Graduate School of Medical Science in New York City was an affordable alternative because it came with grants, scholarships, and a stipend.

His award essay in Molecular Biology of the Cell subsequent success at Cornell, his postgraduate work at the Rockefeller University under Hidesaburo Hanafusa, and then his first job in industry with Johnson & Johnson. August liked working in pharma but he missed academia and especially missed working with students. So he went back, first to teach at Penn State where besides his teaching and lab, August used support from the Sloan Foundation and then from NIH to keep URM students at Penn State in the science stream. In 2008, August was recruited to Cornell in Ithaca.

“Those of us from underrepresented groups who have made it here have a duty to be part of this process,” August writes. “We also need to challenge our communities and schools to support bright, smart kids as much as they support talented athletes. We need to find out what worked for those successful minority scientists and replicate it.” That’s the beauty part for improving educational support for URM students, says August. “The good thing about any successful approach is that what works for our minority students can also work for our majority students.”

August’s lecture today will be about his science, specifically the Tec family of kinases that switch on a surface receptor on mast cells, immune cells which govern the body’s response to allergenic substances and bacterial infections. But August’s life story fits with the tradition of E.E. Just, who is considered the first modern biologist of African-American descent.

Ernest Everett Just was a heroic and also tragic figure born in 1883 in rural South Carolina who through sheer talent and his mother’s determination made it to Dartmouth College where he graduated magna cum laude in 1907. He earned a doctorate at the University of Chicago in 1916, and pursued a long career as Chair of the Zoology Department at Howard University. He pursued his research on the role of the cell surface in embryonic development at laboratories and marine stations in the U.S. and Europe. Because of the virulent racism of the period, Just found wider acceptance at laboratories in Italy, France, and Germany, that is, until the Nazis took power in 1933. Just was at a French marine research station in 1940 when the Germans invaded and arrested Just as an American. The U.S. State Department rescued him and sent him home but Just was already ill with what turned out to be pancreatic cancer. He died in October 1941.

The barriers to students from underrepresented minorities (URMs) pursuing careers in life science research are different today but August says they are real and not easily overcome with strong support for many. August has been active in such programs all his postgraduate career and while he says it makes tremendous demands on his regular academic and scientific life, it is something that successful life scientists from URM backgrounds must consider. Mentoring URM students is sometimes presented as something a URM scientist must do but that isn’t fair, says August. “You have to decide for yourself. Because if you decide to do it, you won’t get much recognition, for example, in getting tenure or in extra incentives (from your institution). But some of us feel that it’s important and that it’s something we need to do and somehow you find a way to do it.”