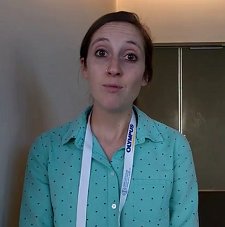 It’s always a short ride, up or down, in ASCB’s 60-second Elevator Speech Contest. For the 2015 judges, it was Lindsay Lammers’s nautical metaphor for a motor protein “that acts like a tugboat to attach DNA and to pull on it to orient it properly” that pulled her self-recorded video (https://vimeo.com/149089279) to the top in the 2015 running of the contest at the ASCB Annual Meeting in San Diego. Lammers, who is a graduate student at Colorado State University, received a Bose portable Bluetooth speaker as first prize. Lammers also wowed the judges with her no-nonsense sign-off, saying that her lab’s important research was funded by her university and by “your tax dollars from the National Institutes of Health” (NIH).

The plug for NIH funding underlined the serious premise of the 60-Second Elevator Speech Contest, say the judges. Researchers never know when they might find themselves with a brief chance to explain their science in a slow elevator to a fellow traveling Senator, academic dean, or hip-hop star. The 2015 Elevator Speech judges, drawn from ASCB’s Public Information and Public Policy Committees, also singled out four
Honorable Mentions:

Divya Singh, Banaras Hindu University, Varanasi, India, intrigued the judges with her comparison of protein trafficking and car traffic. In either traffic, tie-ups can be bad for your health.
https://vimeo.com/149075403

David Katz, Emory University, brought in his students as supporting actors to continue the Elevator Speech Contest tradition of filming his entry in or near a real elevator. His video was the comic hit of the contest.
https://vimeo.com/149089276

* An earlier version of this article appeared on the ASCB Post