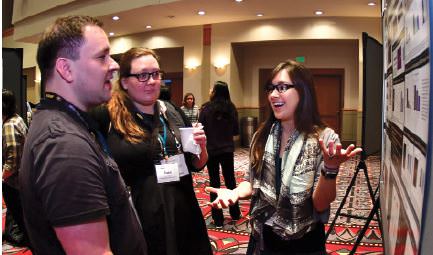 The speakers at ASCB’s second Doorstep Meeting, held on the Saturday prior to the official beginning of the 2017 ASCB|EMBO Meeting in Philadelphia, focused on current
discoveries and potential therapies for neurodegenerative diseases. In addition to hearing about these leading-edge investigations,
attendees at the sold-out meeting had the opportunity to get feedback on their research through morning and afternoon poster sessions
and to chat informally with session speakers during lunchtime roundtable discussions.

The speakers demonstrated just how challenging and mysterious studying the brain and neuronal function and development can be. Researchers described new approaches to understanding the cell biology of neurodegeneration through applications of genetics, computational biology, physics, biochemistry, and biomechanics.

An enriching experience, the poster session at the 2018 Doorstep Meeting allowed presenters a lot of one-on-one time presenting to other attendees.

Paola Arlotta of Harvard University focused on influencers in early brain development in her talk about the development and reprogramming of neuronal diversity in the neocortex. Carla Shatz of Stanford Bio-X at Stanford University explained how her lab has determined that changes in the function of MHC Class I molecules could contribute to developmental disorders, such as those found in schizophrenia and Alzheimer’s disease. Anthony Hyman, managing director of the Max Planck Institute of Molecular Biology & Genetics in Germany, talked about how cells sort their biochemical reactions by creating compartments from unstructured proteins (or biochemical condensates). However, he said, there is a link between the formation of these compartments and the protein aggregation observed in neurodegenerative diseases.

Susan Ackerman from the University of California, San Diego/HHMI spoke about how dysfunction of protein translation impacts
neuronal homeostasis during aging. J. Paul Taylor of St. Jude Children’s Research Hospital/HHMI reported that RNA-binding protein mutations impact membrane-less
organelles and have been linked to degenerative
diseases, such as amyotrophic lateral sclerosis, frontotemporal dementia, and inclusion body myopathy. Erika Holzbaur, University of Pennsylvania Perelman School of Medicine, used live-cell imaging of neurons to enhance her talk about the cellular pathways altered by both aging and neurodegenerative diseases.

The last three talks of the day focused on proteins and their role in safeguarding against or causing neurodegeneration. F. Ulrich Hartl of the Max Planck Institute of Biochemistry talked about how the quality control function of chaperones can fail and lead to protein misfolding and disease. In the case of Parkinson’s disease, Thomas L. Schwarz of the Boston Children’s Hospital and Harvard Medical School reported that mitochondrial degradation can occur simply because the DNA responsible for the proteins it needs to function properly are physically too far away. And last, Dennis Selkoe of the Harvard Medical School/Brigham & Women’s Hospital spoke about compounds recently identified by his lab that stabilize physiological α-synuclein tetramers and offer potential disease prevention strategies.

Frank Bradke, of the German Center for Neurodegenerative Diseases, and Kelsey C. Martin, of the University of California, Los Angeles, David Geffen School of Medicine, organized the Doorstep Meeting.