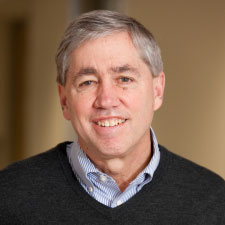 Rick Lifton was moving house. After 23 years in New Haven at Yale, Lifton was packing up in July for Manhattan, where on September 1 he would become the 11th president of the Rockefeller University. The job comes with an on-campus residence, a spectacular free-standing house overlooking New York’s East River that is also used to host official entertainments and gatherings. “I haven’t counted the bedrooms yet. I think it’s five,” Lifton reported.
Lifton will have firmer ideas about his new house and new job by the time he arrives in San Francisco on December 3 to give the keynote address for ASCB 2016. It won’t be Lifton’s first time at ASCB, he said. He gave a keynote talk at ASCB in 1998. At that time, Lifton was noted for his genetic studies of hypertension, identifying rare mutations that drive either extraordinarily high or low blood pressure and tracing all to mutated genes that severely misregulate renal salt absorption. “But it’s been a long time,” said Lifton, “and a fair amount has changed since then.” That is an understatement.

Focused Forensic Genetics
Exome sequencing is what changed everything. Lifton was one of the pioneers of a new kind of forensic genetics that combines emerging genomic sequencing technologies with a different sampling approach focused exclusively on the exons. These are the roughly 180,000 protein-coding genes, which make up 1% of the human genome but are thought to harbor the vast majority of the mutations with large effects in human disease. With exome sequencing, the Lifton lab has pried open the hitherto hidden genetic underpinnings of a startling range of human conditions from tumors that produce endocrine hormones to idiopathic pulmonary fibrosis to congenital heart disease.

Following the initial sequencing of the human genome in 2001, it was clear that re-sequencing the genome by massively parallel sequencing was possible but extremely expensive. Given that the vast majority of mutations with large phenotypic effects that had been mapped in an unbiased fashion and then identified had proved to be attributable to effects on protein-coding regions and flanking intron–exon boundaries, selectively sequencing the 1% of the genome comprising coding sequence seemed an attractive approach for Mendelian discovery. Although Lifton had developed methods for physically purifying mRNAs by hybridization to cloned DNA as a graduate student in the 1970s, the idea of doing the analogous simultaneous selection of DNA of all exons of the human genome nonetheless seemed audacious, said Lifton, who before his new Rockefeller post, was Chair of Genetics at Yale Medical School and a Howard Hughes Medical Institute investigator. The idea of exome sequencing was in the zeitgeist of the time, and a number of academic labs and companies worked on the idea.

Lifton is careful to point out that others, especially Jay Shendure at the University of Washington, also developed robust methods for exome capture. Lifton and colleagues developed an analogous capture approach working with scientists at Nimblegen, iteratively testing and modifying protocols to come up with a robust protocol for production and data analysis. Lifton notes with some pride that their initial variant-calling algorithm was put together by Murim Choi, a postdoc in the lab who used “good intuition about sources of experimental variation, off-the-shelf mapping algorithms, and coding expertise derived from Perl for Dummies.” They eventually were satisfied that they could identify homozygous and heterozygous sequence variants with high sensitivity and specificity.

Proof of Principle
As an initial “test drive” of the technology, in 2009 they pulled off the hat trick in genetic medicine—the first definitive diagnosis of a human genetic disorder by genomic or exomic sequencing. The chance came with a patient referred to Lifton to establish a molecular diagnosis of Bartter syndrome, a rare congenital defect that affects how the kidneys reabsorb sodium. Features of the clinical diagnosis didn’t quite fit, suggesting the diagnosis might not be Bartter syndrome. The Lifton lab sequenced and analyzed the patient’s exome, identifying a novel homozygous mutation in a gene highly conserved across the evolutionary spectrum from Drosophila to humans and strongly linked to absorption of chloride in the colon. This suggested that the disease was not in the kidney but in the colon. Lifton referred the conclusion back to the treating physicians who confirmed his diagnosis of congenital chloride malabsorption with tests of chloride levels in the colon. The diagnosis also had therapeutic implications because there was an existing therapy for the condition. Five other patients with suspected Bartter syndrome were also shown to have colonic malabsorption instead.

Surely when the physician’s report came back, there was a celebration in the Lifton lab? “It was clearly a wonderful validation of our approach,” Lifton allowed, but he remembered the far larger questions that came to him immediately. “Sure, it was, ‘Wow. This really works.’ But to me, this was just a proof of principle. The more interesting question over the last seven years arises from the observation that we know what happens in humans when about 3,000 of our 20,000 genes are mutated. But now that we have sequences of many branches of the phylogenetic tree, we know that all the vertebrates are basically dealing with the same gene set. Sure, there are some rapidly evolving gene sets, such as genes of the immune system, but the vast majority of human genes have been kept around for at least the last 500 million years, undoubtedly because of impaired reproductive fitness if they are lost. This strongly suggests that there are going to be strong phenotypes that result from mutations in many, many additional genes. And if that’s true, why haven’t we previously recognized these phenotypes as simple Mendelian traits?”

The Search for Lost Phenotypes
Lifton continued, “So we started thinking about classes of mutations that would have large phenotypic effect but would not show typical patterns of Mendelian segregation in families. For example, heterozygous mutations that drastically impair reproductive fitness will nearly always be de novo mutations and appear only sporadically in the population. These could not previously be sought. Similarly, mutations that only impart phenotypic effect following specific environmental exposures or via interaction with one or more additional genetic loci may recur in families but not show typical patterns of Mendelian transmission. Diseases caused by somatic mutations, including but not limited to cancer, were still other possibilities. Through the last seven years, we’ve tested each of these paradigms and have discovered new genes and biology underlying a wide range of diseases for which genetic contributions were suspected but not established.”

Lifton said that two good examples of the contribution of de novo mutation are autism and congenital heart disease, which unexpectedly have both proved to be frequently caused by de novo mutations that cause the loss of function of genes involved in chromatin remodeling. An additional surprise for both diseases has been that a very large number of genes in this pathway—likely more than 100—can be mutated to give similar phenotypes. Most interestingly, he notes, in many cases de novo loss of function mutations in the same genes in this pathway are found in patients with congenital heart disease and autism.

There are real clinical implications here, he believes. “We’ve known for a long time that children with congenital heart defects, after their hearts are surgically corrected, frequently go on to have adverse neurological outcomes. We haven’t known if that was attributable to anoxia before surgery, a poor outcome from surgery, or the underlying biology. These findings clearly indicate that in many cases it’s the underlying biology that’s driving the outcome.”

An example of a disease featuring gene–environment interaction from recent work is pulmonary fibrosis, in which his group, collaborating with Christine Garcia’s lab at the University of Texas Southwestern Medical Center, discovered mutations in the genes PARN and RTEL1 that cause disease in conjunction with inhaled environmental exposures. “You may be fine if you’re never exposed to an environmental co-factor,” Lifton explained. Susceptibility to certain infections could be another example. “You may be fine with a mutation in the interferon response pathway unless exposed to a Neisseria that causes meningitis, in which case your ability to fight it off is drastically impaired.”

All of this, Lifton believes, points to a clear path forward to answer the truly big question revealed by exome sequencing: “What is the consequence of a mutation in every gene in the human genome?”
Getting there, said Lifton, is not going to be easy. “What remains to be done in human genetics? The answer is practically everything.”