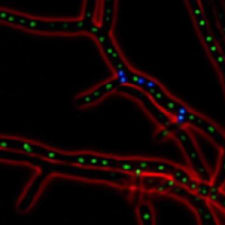 The syncytial filamentous fungus Ashbya is seen in this still image from one of the 2014 Celldance winners, Amy Gladfelter’s Companions in Discovery.

Celldance Studios, aka ASCB’s Public Information Committee (PIC), has unveiled its list of three Celldance 2016 “Tell Your Own Cell Story” productions that will premiere at ASCB 2016 in San Francisco this December (www.ascb.org/celldance2016). The three short (three- to four-minute) videos will feature eye-popping live cell imaging framed in accessible narratives that will dazzle both biologists and the public. The three ASCB member labs chosen are are those of Daniela Cimini, Virginia Polytechnic Institute and State University; Matthieu Piel, Institut Curie; and Roberto Weigert, National Cancer Institute, NIH.

Each of the three labs will receive a $1,000 unrestricted production grant from ASCB plus full postproduction services including final editing, a legal musical score, credits, titles, and promotion, all at ASCB expense. Each video-making lab has an assigned PIC member/producer to act as a go-between and advisor for the video-makers. In this role, Claire Walczak will work with the Cimini lab, Heidi Hehnly-Chang with the Piel group, and Elisa Konieczko with the Weigert lab.

Here is what the three video-making labs are planning:

This is the third year of Celldance Studio’s “Tell Your Own Cell Story” videos where ASCB member labs are given resources and backup support to bring their big discoveries to the little screen in more than living color. The 2014 and 2015 Celldance videos can be seen at
www.ascb.org/past-celldance-winners.