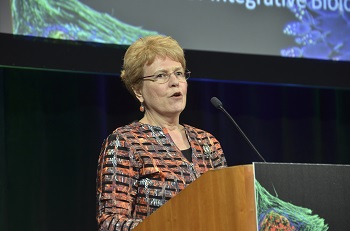 Not Every Scientist Should Do Public Communications, But All Scientists Should Support Those Who Do—Jane Lubchenco’s Keynote at ASCB 2015

Jane Lubchenco, a professor of marine ecology at Oregon State University, the former Administrator of the U.S. National Oceanic and Atmospheric Administration (NOAA), and the current U.S. State Department Science Envoy for the Ocean, was one of the opening Keynote speakers at ASCB 2015 in San Diego in December. In the first part of her talk, “Can the Science Paradox Be Resolved?,” Lubchenco described her unexpected summons in 2008 to Chicago to meet with President-Elect Barack Obama, who invited her to join his “science team” as head of NOAA. Lubchenco described her four years at NOAA as exhilarating and productive but challenging. Hurricane Sandy and the Deepwater Horizon blow-out in the Gulf of Mexico occurred on her watch. But under her leadership, NOAA positioned scientific integrity as sine qua non in the midst of an increasingly toxic, partisan, and anti-science atmosphere in Washington, DC. This mistrust of science is not confined to inside the Beltway, Lubchenco believes.

In the second part of her talk, Lubchenco, a longtime advocate for training scientists to engage the public, threw down a challenge to cell biologists to learn how to speak for themselves. This section of her address has been condensed below, but the full text, including citations, can be read at http://bit.ly/1OmRXnI.

The Problem: The Science–Society Paradox

Here, briefly, is the problem as I see it. At a time when scientific information is more relevant for society than ever before, many citizens and their elected leaders distrust science on specific issues, sometimes outright rejecting scientific information and even aggressively orchestrating anti-science witch hunts. To be sure, vested interests organize and lavishly fund many of these anti-science campaigns, but they gain traction because they tap into public perceptions about science and scientists.

To consider this problem in greater depth, we need to break it down into three boxes: 1) views about science in general, 2) attitudes about the science of particular issues, and 3) opinions about the trustworthiness of scientists. And let me be clear that I will use the term “science” as shorthand for “science, technology, engineering, and math.”

1. Views about Science in General
Your and my view of science as a worthy pursuit that will likely benefit humanity is embraced by many in the United States, including many in Congress. Science is broadly seen to have improved human health, provided new engines of economic growth, improved our lives, enhanced national prestige, and strengthened national security. Many polls are consistent through time and conclude that science as a whole is trusted and valued. That is good news, indeed.

2. Attitudes about the Science of Particular Issues
However, generic support for science falls away in arenas where scientific information or its consequences conflict with values or beliefs. We see this, for example, in conflicts around climate change, stem cells, antibiotics, vaccines, evolution, the value of social sciences, gene-editing, etc. In some of these areas, the real choices are societal, not scientific; but in others, beliefs and values often trump information.

For example, as Naomi Oreskes and Erik Conway have written, some climate change deniers (as well as deniers of acid rain, the ozone shield, and tobacco’s health consequences) believe that the regulations they think would be needed to deal with climate change (or the other problems) are a bigger threat to freedom and democracy than the problem. In another realm, many who do not believe in evolution value literal interpretations of the Bible and a superior role for humans over any inquiry-based approach.

In these examples, all the information in the world won’t change someone’s belief. Conflicts are not about insufficient or conflicting information, but about values or how values are perceived to relate to the issue.

Scientists in certain areas are often associated with stereotypes. Ecologists, for example, are often assumed to be environmentalists with an inherent bias and a particular agenda. They are thought of as communicating only messages of doom and gloom, and focusing only on problems, never solutions. Cell biologists are often seen as aloof, speaking in impenetrable language and doing Frankenstein-like research—i.e., playing God—and generally being scary. And all scientists are stereotyped as just wanting more money for their research, often manufacturing uncertainties to justify the need for more grant money.

These stereotypes reflect beliefs about the trustworthiness of the messengers. Social scientists have contributed significantly to understanding some of these tensions. Researchers Susan Fiske and Cydney Dupree have found that to be credible to an audience, someone must be perceived as both capable (having expertise and competence) and warm (being trustworthy and friendly). I repeat: to be credible, someone must be both capable and warm.

Fiske and Dupree found that scientists are generally seen as being “competent but cold” by the American public in relation to other jobs. Because of this low “warmth” scientists are not always perceived as trustworthy. They are knowledgeable, but not always to be believed. In other words, these researchers conclude, scientists have earned respect but not trust.

One take-away from this research is that scientists can better understand how they are perceived by nonscientists. It is not enough to be competent and knowledgeable; if we want to be trusted, we also need to be and be seen as trustworthy. If our behavior (giving nerdy presentations) is preventing audiences from trusting us, we can modify that behavior and give audiences reasons to trust us, not just respect us.

These results may be confusing or surprising to many scientists. Scientists “trust” scientific findings because the findings have resulted from the scientific process and they have met the standard of peer-review or our own review based on our knowledge. We have the knowledge to judge if something is trustworthy. We judge the process and the message, not the messenger. Nonscientists often place a greater emphasis on the messenger than the message, deciding to believe the message only if the messenger seems trustworthy.

Solutions to This Paradox

Why is it important that we understand these conflicts and what might be done to address them? I see two reasons to care: How science and scientists are perceived is important 1) because science needs society, e.g., for opportunities to create and share new knowledge with society, and 2) because society needs science to help find solutions and inform decisions to improve human well-being.

To resolve the science–society paradox, scientists must embrace their social contract with society. I believe we have an obligation to do more than just discover new knowledge and share it with other scientists. We must also engage more actively with society in meaningful, two-way interactions. In short, in exchange for public funding, we have a responsibility to be helpful.

From what I can tell, ASCB has made good inroads in reaching out to policy makers, establishing relationships with decision-makers, producing position papers, and, importantly, offering communication training. I applaud those efforts but believe they are not at the scale that is needed to accomplish the goals.

Together we must take on the challenge of changing the narratives around both specific issues and perceptions of the trustworthiness of scientists, and do so with humility, transparency, and honesty. We know that doing so is possible. Some scientists are fully engaged in changing these narratives. But until scientists across all disciples are more fully involved and until their professional societies, universities, and funders enable, support, and empower them, progress will not occur.

So, what else can be done? Here are six recommendations: 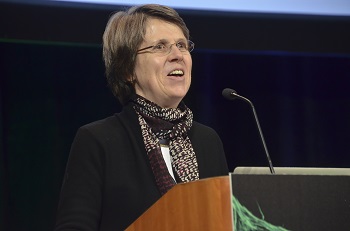 Keynote speaker Sallie “Penny” Chisholm presented her address “Tiny Cell, Global Impact: A Journey of Discovery with a Microbe from the Sea.”

2. Train and empower scientists to communicate effectively, then reward them for doing so
a. To communicate effectively with lay audiences, scientists need a safe environment in which to learn new skills. Among other things, they need to become bilingual—to speak the language of lay people as well as the language of science. Learning to translate complex, nuanced, technical findings into understandable but accurate information is often a challenge, but it is possible. Experienced coaches in a safe environment can help scientists become proficient in their new language.

b. To be deemed trustworthy as well as capable, scientists need to communicate in ways that make them believable and credible. And they need to demonstrate respect for their audiences. Using good analogies and metaphors, telling stories, showing emotion, and talking about values and shared experiences can all enhance communication efforts.

c. Some training programs already exist, but more are needed. Opportunities and models include: the Leopold Leadership Program for mid-career environmental scientists, COMPASS communications workshops, the Alan Alda Center for Communicating Science, and the AAAS Leshner Leadership Institute for Public Engagement. But others are needed. ASCB might consider either its own leadership/training program for cell biologists analogous to the Leopold program or a track within an existing effort.

e. Individuals, societies like ASCB, universities, and government agencies all have key roles to play. We must change the culture and reward structure within academia and agencies.

f. The scientific, governmental, and academic communities must recognize that not every scientist can or should be a public communicator, but in my view, all should support those who are.

3. Make science more accessible, open, and transparent to the public
Let lay folks peek behind the curtain, or better yet, help produce knowledge.

4. Build the infrastructure that supports active communication training and engagement with society
a. Scientists tell us that one of the biggest impediments to doing more public outreach and communication is the lack of time and the lack of appropriate recognition by their peers. If we want scientists to be public communicators, we need to recognize and value their efforts. We need to change the academic reward structure, e.g., what “counts” in promotion and tenure decisions. If doing public outreach simply means doing more in addition to the “usual” teaching, publishing, getting grants, etc., that is an unfair and unrealistic expectation. The cultural change that has occurred around valuing good teaching provides hope that a cultural change around the importance of communications and engagement with society is feasible. Other infrastructural elements that are needed include: Establish interactions with social scientists and communications experts; create venues for routine interactions with policy makers and managers whose portfolios are relevant; initiate partnerships with relevant, science-based NGOs that have deep expertise in public communication or policy; recognize the need to provide scientific communications training for students as well as faculty.

b. Acquire the funding needed to do this effectively.

5. Respond to society’s needs and engage in science that helps produce solutions
Exciting scientific questions can come both from within the scientific community and from society. Interactions with society can pose new questions that lead to novel scientific discoveries that may well be helpful to society. “Use-inspired scientific research” (in the spirit of Donald Stokes) provides exciting options to do fundamental research that is immediately relevant to societal needs.

6. Unleash and empower your students
Undergraduate and graduate students are chomping at the bit to be engaged in society. They are tweeting and blogging and dancing their PhDs. Help them succeed, but don’t tell them to keep their heads down until they get tenure and then become active.

We need to change the narrative about scientists and science through smarter engagement with the public and with policymakers. And we need to scale up what is already underway. Armed with information about what the public understands and why, scientists can do a better job of communicating and engaging effectively. Society will benefit, and so will we.