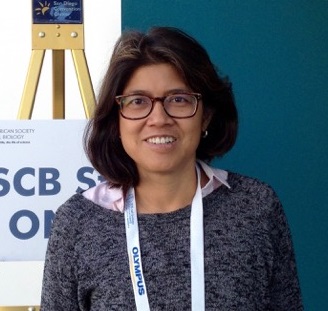 Mary Frances Nunez Teruel graduated with a PhD in Aeronautical Engineering from Stanford University in 1996. A decade later, she is back at Stanford but now as a professor in Stanford’s Department of Chemical and Systems Biology. Teruel says that a simple question connects her two worlds because it applies to both technology and living cells: “How does it work?” With that question in mind, the Teruel Lab is conducting groundbreaking work on the mechanisms of fat cell differentiation that could point to a new way of treating obesity.

Teruel came to cell biology toward the end of her engineering PhD at Stanford when a friend asked her to construct an electroporation device to introduce molecules into cells by using electric fields. After building the device, Teruel began exploring ways to optimize it. To test the improvements, she needed cells so she learned how to culture her own. From those beginnings, Teruel became increasingly interested in microscopy and cell imaging, eventually moving to Duke University to work in the Department of Cell Biology as a microscopy engineer. That led to a Duke postdoctoral fellowship in cell biology and then a return to Stanford as a senior research scientist in the Department of Molecular Pharmacology. In 2011, Stanford offered her a tenure track appointment in chemical and systems biology.

As a highly visual person, Teruel uses a white board to draw out the problem or issue she is trying to understand. “It is really important for me to see how things work,” she adds, noting that at home she enjoys fixing broken appliances because it gives her the chance to examine how they function. “Seeing is believing,” Teruel says, adding that seeing the latest microscopy and imaging presentations at ASCB meetings helps her feed that visual need.

At ASCB 2015, Teruel presented an abstract, “A circadian code for fat cell differentiation,” that was selected by the Public Information Committee as an Honor highlight. This research grew out of Teruel’s desire to understand how fat cells are made in the human body and how only some cells among an excess of precursors differentiate. How does the body prevent them from all differentiating at the same time? How is the rate set, with human fat cells turning over at a 10% rate every year?

It’s All in the Timing

Researchers had never examined the timing of the strongly oscillating glucocorticoid pulses that drive fat-cell differentiation, Teruel explains, but she decided that if the timing mechanism could be understood, it might offer a new paradigm for treating obesity and related diseases. Such experiments have not been done because, says Teruel, “They’re tricky,” requiring a high level merger of biology, engineering, math, and medicine.

The goal of the Teruel Lab is to understand how a cell transitions from a proliferating to a terminal state specifically, to plumb the mysteries of fat cell differentiation, or adipogenesis. Precursor cells line the fat cells’ vasculature and proliferate into additional fat cells when they receive the right stimulus, such as glucocorticoids from the bloodstream. When the cells cease to divide, becoming terminal, large amounts of lipid accumulate, typically comprising 20% or more of human body cells. The lab is exploring how fat cell creation is constrained to less than 1% differentiation under normal conditions, given the large number of precursor cells. Rats, for example, secrete glucocorticoids every day at 12-hour circadian rhythms. When the rhythmic pulses are lost, obesity occurs.

To understand the differentiation process, Teruel says, “You have to watch cells differentiate over a few days, live, and track them.” This is now possible by introducing a probe into fat cells that measures differentiation.

Fat cells follow a circadian rhythm in sensing, and by filtering out, the glucocorticoid oscillations. Teruel’s lab was able to buck the conventional view that glucocorticoids cause obesity by stimulating appetite through the brain. Instead, Teruel believes that the timing of hormone stimuli works directly at the fat cell level. Sustained glucocorticoid stimulus produces maximum cell differentiation, she says, but delivering the stimulus in circadian pulses, as occurs in living tissue, produces minimal differentiation. “So there’s this filter in the system,” Teruel explains. “It’s the same total stimulus, you just give it differently.” If the timing isn’t right, she says, “You won’t make a fat cell.” The duration of the stimulus, not the amplitude, is what makes the difference, she believes.

Furthermore, “Now we know a specific protein in the fat cell transmits the signal to the glucocorticoid receptor.” If the C/EBPβ protein can be targeted to maintain circadian signaling, fat cells will not be created. The Teruel Lab identified the mechanism late last year and is validating the finding in mice. “It’s really hard to manipulate a transcription factor, but if we can find a way to manipulate it by making a small molecule that would directly or indirectly cause C/EBPβ degradation at the right time, that could be really useful,” she says.

To further their research, the Teruel team is collaborating with a Stanford mechanical engineering professor to build devices that can automatically introduce oscillations in cells over time. “So there are a lot of engineering principles going into what we’re doing now,” she says. Previously, undergrads helped to apply stimuli manually and collect data over five days. The stimuli pulses were applied for a minimum of six hours on, 18 hours off, but also included other regimens, such as 12 hours on, 12 hours off. Teruel notes that people who are stressed lose the rhythmic pulsatility, and that condition, in which “there’s no off” but a constant pulse, is linked to obesity. “You need the ‘off’ to get beta out of the nucleus.”

Teruel’s initial interest in cell signaling, which led her to research the molecular mechanisms underlying insulin resistance, diabetes, and obesity, has proven to be a promising direction for the engineer turned cell biologist. Fat cell signaling turns out to be a good model for differentiation in general. Because the processes were so complicated, she had to model them, which has now brought her back to engineering.

Looking ahead, Teruel plans to continue building an interdisciplinary team in her lab, to test these results using in vivo mouse experiments. In engineering, work is always done in teams, Teruel adds.

* An earlier version of this article appeared on the ASCB Post