Scott D. Emr will give the 2017 Keith Porter Lecture at the 2017 ASCB|EMBO Meeting this December in Philadelphia. Emr is the Frank H.T. Rhodes Class of 1956 Professor of Molecular Biology and Genetics and the first director of the Weill Institute for Cell and Molecular Biology at Cornell University. The Porter Lecture is named for Keith Porter, a pioneer in the use of electron microscopy in biology and a founder of ASCB.

Emr’s research centers on the complex mechanisms that move cargo into and out of eukaryotic cells. The highly regulated and specific ways that cells accomplish the “shipping and receiving” of proteins and lipids, as well as some of the genetic and biochemical tools used to study these processes, have held Emr’s interest since graduate school.

Emr earned his PhD in molecular genetics from Harvard Medical School in 1981 in the laboratories of Thomas Silhavy and Jonathan Beckwith. Emr says that 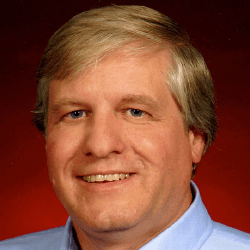 Silhavy and Beckwith exposed him to the power of bacterial genetics, which enabled them to discover how membrane protein biogenesis occurs. The 1970s also was a time when new techniques in molecular biology were exploding.

In Love with Genetics and Membrane Trafficking
“I was captivated by this problem and by the growing list of molecular genetic tools that were newly available to probe this problem, including the application of the new Fred Sanger DNA sequencing technology,” Emr said. “We were able to isolate and characterize the first secretion-defective mutants in the signal sequence of a secreted protein (bacterial lambda phage receptor protein, LamB) that blocked its secretion and resulted in accumulation of the protein in the cytoplasm. In addition, using classical genetic selections, we isolated the first mutations in the translocon (PrlA/SecY) that recognizes and transfers secreted proteins across the bacterial plasma membrane.”

Emr said he was “transformed” by the experience of these discoveries and he “fell in love with genetics and membrane trafficking.” Next, Emr was fortunate to be able to secure a postdoctoral position with Randy Schekman at the University of California, Berkeley.

“With Randy, I worked on protein secretion in yeast. I wanted to learn every detail about the newly isolated yeast sec mutants and all the genetic and biochemical approaches one could use to analyze them,” Emr said. “Yeast cloning vectors and other molecular biology tools were becoming available at that time, and I took full advantage of these new tools. I merged my graduate student molecular genetics expertise with my newly acquired yeast cell biology and biochemistry knowledge to develop gene fusion approaches that would permit new genetic selections in yeast for membrane trafficking mutants.”

Emr landed a faculty position at the California Institute of Technology, where he advanced from assistant to associate professor from 1983 to 1991. George Palade recruited Emr away from Caltech in 1991 to the University of California, San Diego, School of Medicine. He was appointed Distinguished Professor of Cellular & Molecular Medicine and HHMI investigator until he departed in 2007 to assume his position as director of the newly created Weill Institute for Cell and Molecular Biology at Cornell.

Molecular Mechanisms of Organelle Biogenesis
Today, Emr says there still are many unsolved mysteries regarding membrane trafficking. As a cell biologist and biochemist, Emr said his work has focused on uncovering the molecular mechanisms responsible for the biogenesis of specialized compartments (i.e., organelles), which are present inside all cells. These organelles perform key biochemical functions that keep cells alive. A better understanding of the role for membrane lipid assymetries and membrane/organelle contact sites through basic scientific research will help reveal pathways and mechanisms that underlie human disease.

“One simple question that has occupied my thinking for many years is, how do cells maintain and regulate the size, shape, number, and activity (composition) of each organelle? My personal interest has focused on lysosomes and endosomes,” he said. “In my lifetime, I hope to understand the mechanisms that monitor and regulate the functional lifetime of specific membrane proteins as well as the organelles that contain them. These proteostasis and homeostatic quality control pathways keep cells healthy and are essential for cells to respond to changes (signals and stresses) that require remodeling of membranes and organelles.”

The Emr laboratory has used a single-celled yeast as a genetic model system to discover and isolate the complex machinery as well as a special class of signaling lipids, phosphoinositides, that sort and deliver proteins and enzymes to lysosomes, the organelles that degrade and recycle cellular proteins. This sorting machinery directs the packaging of proteins into small membrane-enclosed carriers called vesicles. One set of machines that Emr’s lab discovered, the ESCRT complexes, turn off signals received by specific growth factor receptors at the cell’s surface by sorting the activated receptors into vesicles.

“These vesicles are then delivered to the lysosome where the receptors are inactivated and degraded,” Emr said. “Defects in the ESCRT complexes result in prolonged signaling by the growth factor receptors, which ultimately can lead to uncontrolled cell growth and tumor formation. The ESCRT complexes also have been found to play an essential role in cytokinesis, plasma membrane repair, nuclear envelope reformation, and the budding and release of the HIV virus from infected cells.”

Emr has earned the Searle Scholars Award and an NSF Presidential Young Investigator Award. He was elected to the National Academy of Sciences (2007), the American Academy of Arts and Sciences (2004), and the American Academy of Microbiology (1998). He won the 2003 Hansen Foundation Gold Medal Prize for elucidating intracellular sorting and transport pathways. In 2007, he was awarded the Avanti Prize for his key contributions in understanding lipid signaling pathways. He was awarded the van Deenan Medal in 2014 in recognition of his outstanding career in biomembrane research. He also served as a member of the advisory boards for the Pew Scholars Program in Biomedical Sciences and the Searle Scholars Program. He has been a member of ASCB since 1988. n