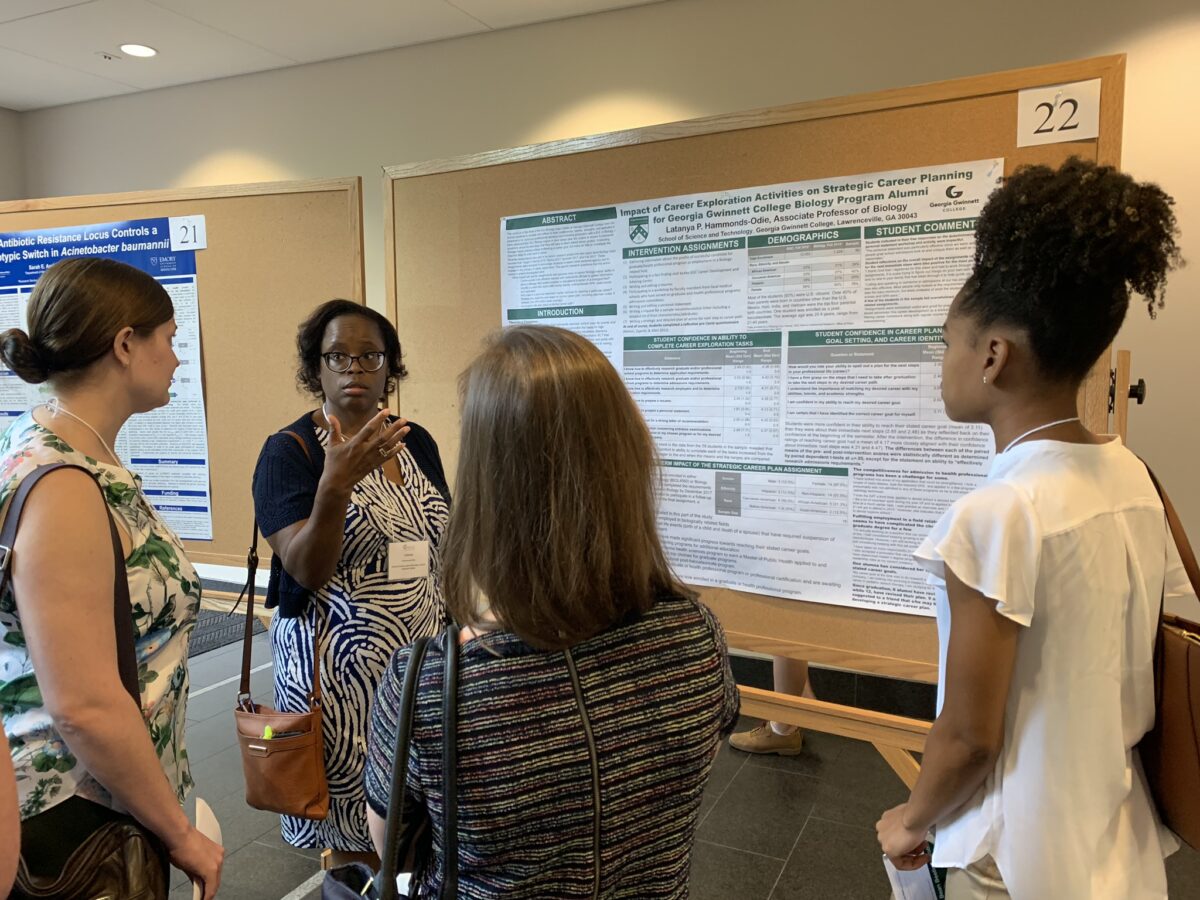 ASCB’s first regional meeting, Teaching Tomorrow’s Scientists, was held on May 31, 2019,  at the University of Georgia in Athens, GA. The day-long conference was targeted for biology educators. It included education research and scientific plenaries, a poster session, networking lunch, workshops, and a mixer.

Monica Lewis, a postdoc at the University of Alabama at Birmingham, had never been to a teaching conference before. Attending ASCB’s Teaching Tomorrow’s Scientists regional meeting was an obvious choice for her: “It’s close, the registration is reasonable, and I was looking for a teaching meeting. It’s a win-win.”

The meeting attracted over 70 attendees, mostly from states in the Southeast. Attendees included faculty, postdocs, graduate students, and undergraduates and the atmosphere was friendly and supportive. Melissa LaBonty, a faculty member at the University of Alabama at Birmingham noted, “Everybody’s here for the same goal: to increase learning and share the love of teaching.”

Opportunities to network occurred throughout the meeting, not just during the “networking lunch” or mixer. Since it was a meeting that emphasized evidence-based teaching, even the education research plenary engaged attendees in active-learning activities. Teaching Tomorrow’s Scientists was the first teaching meeting attended by Gunjan Gakhar, a faculty member at Washington State University – Vancouver. She was surprised by the degree of active engagement throughout the meeting, commenting that “It was unique to be asked to do things at the meeting. Everything I see I’m seeing from the point of view of my students.”

The poster session included work from a variety of topics, such as implementation of course-based research and unique active-learning strategies. Other posters reported results from education research on topics including students’ decision to withdraw from science gateway courses and student experiences with mentors in the research laboratory.

Workshops were offered over two sessions in the afternoon. Each session had four concurrent workshops, which aimed to build attendees’ skills in inclusion and student engagement, practical applications of education research, and building science curricula at the department level. Heather Comstra-Desai, a postdoc at Emory University, attended the latter workshop and explained that “It was really cool to see how people from a department develop a curriculum. It’s cool to see people from a science department be excited about teaching.”

The attendees called out several advantages of the regional meeting. It was only for one day and was within driving distance for many, which made it easy to participate. The low registration fee ($40 for ASCB members/ $50 for non-members) also made it accessible. As Heather Tinsley, Associate Professor at the University of Montevallo, summed up, “A regional meeting helps with networking because you can connect with other educators to team up on initiatives.” Then she added, “How can you not go to it?”