Cancer cell biology can be a bewildering jungle where well-charted pathways and promising therapies disappear into the undergrowth while the unexpected can jump out without warning. Something unexpectedly familiar did jump out of Joan Brugge’s talk on cancer therapy resistance at the ASCB’s first “Doorstep” Meeting on the Cell Biology of Cancer, held on the first day of the 2016 ASCB Annual Meeting. Brugge, who is at Harvard Medical School where she also directs the Ludwig Center, said she was offering “a cell biologist’s perspective” and put up a slide about work by Charles Swanton’s lab at Cancer Research UK on tumor heterogeneity. Swanton and his colleagues had sequenced multiple regions in renal tumors, trying to trace the evolutionary lineage of cancer cells within a single solid tumor. They ended up with a branching chart of evolving tumor heterogeneity, depicting mutations moving off onto new branches. And yet 63–69% of the mutations found in one region by the researchers were not detectable anywhere else in the same tumor.

Darwin and Cancer
This gave the Swanton chart a startling resemblance to Charles Darwin’s famous 1837 notebook where he first sketched out his evolution hypothesis with “I think” scrawled across the top. “There is a tremendous amount of heterogeneity within the tumor so that it looks like a typical Darwinian model of genetic variation,” Brugge explained. What we need to think about cancer’s frustrating resilience against targeted therapy is that, “Millions of years of evolution take place 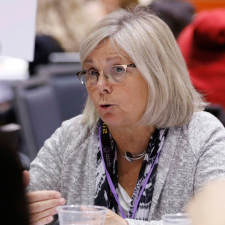 within the individual tumor because of the high degree of genetic instability,” she said.

But genetic instability is far from the only driver of therapy resistance in the tumor’s “complex and robust ecosystem,” according to Brugge. Her talk ran through a list of cancer therapeutic obstacles: phenotypic and epigenetic alterations, drug-induced adaptive responses, immune escape, the sheltering effects of the extracellular matrix, stochastic variations, plus physical and chemical barriers to therapy delivery.

Brugge was one of 11 leading-edge researchers at the Doorstep Meeting, covering in a series of 35-minute talks the full range of problems—and possibilities—behind the latest wave of cancer therapeutics. Other speakers included Sean Morrison, University of Texas Southwestern Medical Center/HHMI, on critical differences in self-renewal between normal and cancer stem cells; Aviv Regev, Massachusetts Institute of Technology (MIT)/Broad Institute/HHMI, on the use of single-cell genomics and bioinformatics to analyze tumor populations; and Valerie Weaver, University of California, San Francisco (UCSF), on the physical impact of the extracellular matrix on the cancer ecosystem.

ASCB Council member Ira Mellman of Genentech and UCSF’s Alan Ashworth organized the day-long cancer biology Doorstep Meeting, which filled its 150 places well in advance. (ASCB Council has already voted to hold a second Doorstep Meeting in conjunction with the opening of ASCB 2017 on December 2 in Philadelphia. The topic will be the Cell Biology of Degeneration and Repair in the Nervous System.)

Basic Research Meets New Technologies
Mellman, who is vice president in charge of Genentech’s ambitious cancer immunotherapy development program, led off with a survey of the cancer treatment landscape transformed by recent breakthroughs. Ashworth, who played a key role in the discovery in the 1990s of BRCA genes, the first directly linked to a high risk for breast cancer in a subset of the population, followed. Ashworth believes that the recent flowering of new cancer therapies derives from decades of basic cell biology research, aided by new technologies. In his own research, the explosion in tumor genomic sequencing has redefined what he calls “BRCAness,” not as a specific mutation but as a weakness in a molecular pathway that governs DNA repair so that any cell that has a defect in that pathway should be equally susceptible.

Discovery, though, still depends on scientific self-sacrifice, Ashworth explained. To perfect a genomic assay on DNA repair, his lab resorted to using plucked hair follicles. “There was this weird phase when everyone in my lab was walking around with one eyebrow,” he recalled. “Anyone who sat down had their eyebrows plucked.”

To keep the personal element before her doorstep audience, Brugge opened with a slide of her close friend Susan Lindquist, the MIT/Broad Institute/Whitehead Institute researcher and ASCB member, who died last October at 67 of ovarian cancer. Lindquist had been treated under an experimental immunotherapy protocol, Brugge said. “And her cancer responded dramatically. There was a miraculous shrinkage but then it came roaring back.” Brugge said that in her final days, Lindquist told her, “Joan, I have two instructions for you. One, recruit more basic scientists to work on cancer. Two, beg them to put their egos aside and share the data to beat this horrible disease.”

ASCB wants to give a special thank you to HHMI, Calico and Genentech for supporting this meeting.