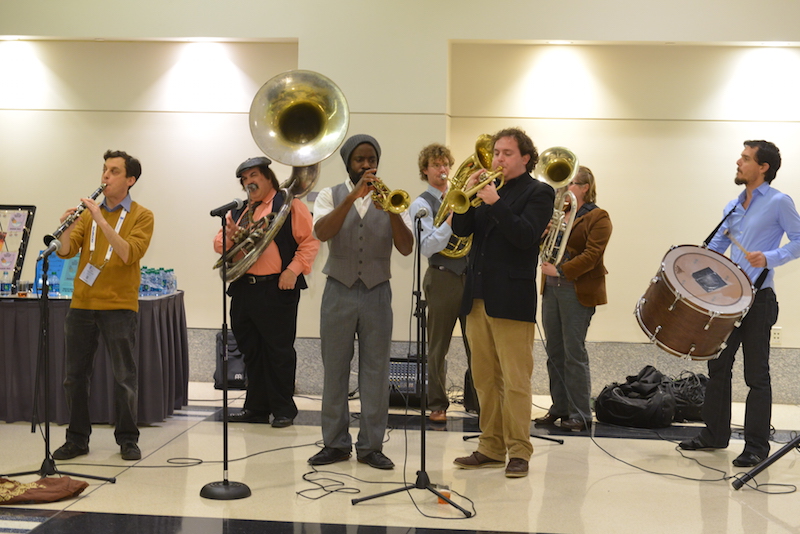 Saturday night, Larry Goldfinger was wailing on his clarinet, punching out Bulgarian wedding music and Romanian ballads with his Balkan brass band in the lobby of the Pennsylvania Convention Center in central Philadelphia. Goldfinger’s West Philadelphia Orchestra was entertaining for the opening night of the 2014 ASCB/IFCB meeting. Come Tuesday afternoon, Goldfinger will switch hats. As a Temple University Associate Professor of Anatomy and Cell Biology, L.E. Goldfinger will be presenting a poster in the ASCB Learning Center on Ras-driven MAPK signaling in plasma microdomains.

Goldfinger has been juggling his two identities—Balkan musician and cell biology researcher—since 2006 when newly arrived at Temple. He was walking down a street in West Philadelphia (“It’s our Brooklyn,” he explains) when he heard a distinctive minor modal music with a brass-driven syncopated pulse coming from a nearby front porch. In the 1990s, Goldfinger had played klezmer, a revival of a popular Jewish musical style brought to America by Yiddish immigrants who fused it in the early 20th century with jazz. This porch music sounded both similar to klezmer but wildly different. Goldfinger couldn’t resist climbing the porch steps to ask the motley band of musicians jamming together what they were playing. It was Balkan music, they explained, a loosely-defined conglomerate of Serbian, Romanian, Macedonian, and what many call Gypsy music, which is more properly the music of the Roma people. Goldfinger was soon invited to sit in with his clarinet and then into the line-up of the emerging West Philadelphia Orchestra.

Goldfinger has been playing with them ever since on a steady evening and weekend schedule of weddings and bar mitzvahs along with regular Philly club dates. The orchestra’s repertoire has widened considerably from early days, Goldfinger says, to take in pure jazz, original compositions, and folk music from regions beyond the Balkans. Meanwhile in his other life, Goldfinger continues as a stalwart at ASCB meetings, which he has been attending faithfully since graduate school. When Goldfinger heard that the ASCB was coming back to Philadelphia in 2014, he thought, what the heck? and contacted ASCB Meeting Director Trina Armstrong. She thought, why not?

So for a few hours last Saturday, the two halves of Larry Goldfinger’s life came together before his eyes as a line of uninhibited cell biologists snaked across the convention center lobby to the wild sounds of a Balkan brass band, fronted by Goldfinger’s clarinet and Petia Zamfirova’s singing. Sizing up his scientific peers and colleagues as party animals, Goldfinger says he was pleased by the ASCB crowd reaction, even though the newly-arrived attendees looked more tired and more preoccupied with serious stuff than your average room of hard-drinking wedding guests. On Tuesday, Goldfinger will face many of the same people who won’t recognize him as the guy with the clarinet. Instead, they will ply him with questions about TC-21deficient mice and GPVI/FcR [gamma]-mediated platelet activation. It will be music to Goldfinger’s ears.