A Deluge of Exciting Research Floods the 2018 ASCB|EMBO Meeting 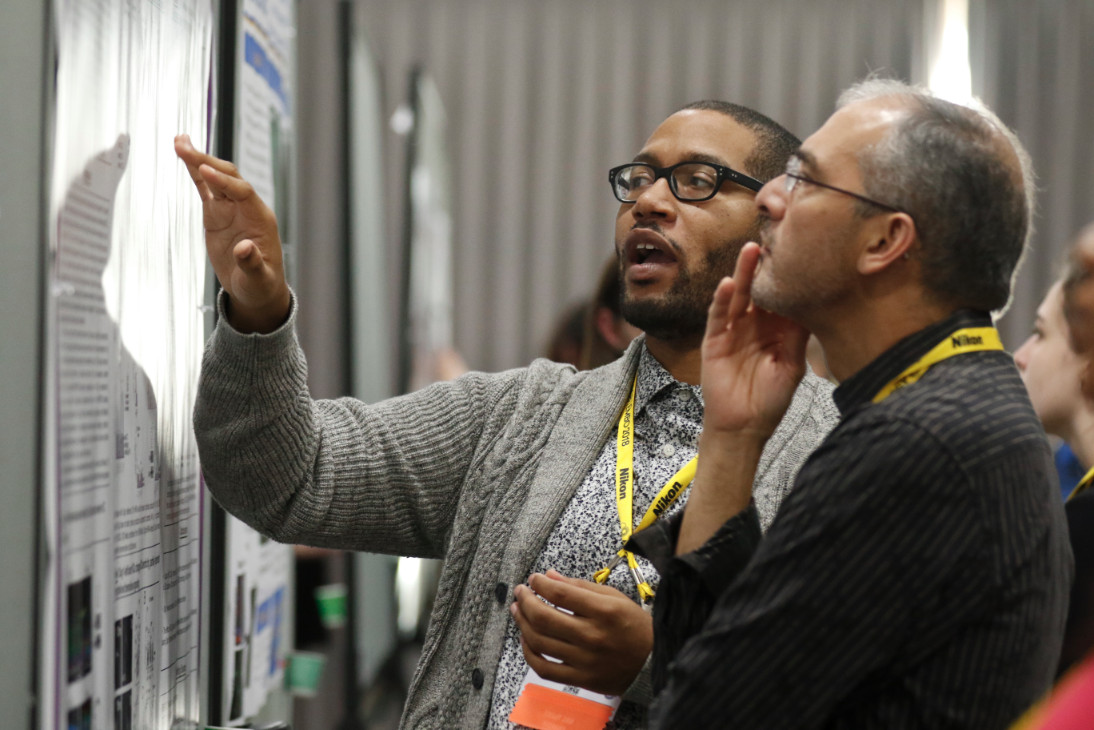 Posters are always popular, and this year was no exception.

Attendees arrived for the 2018 ASCB|EMBO Meeting in early December to the aftermath of flash flooding that had recently inundated the usually sunny streets of downtown San Diego. But skies cleared as the meeting began featuring Symposia, a rousing Keynote Address, awards lectures, workshops, networking, and interactive poster sessions on the most advanced and innovative research currently happening in the realm of cell biology.

Stem Cells and Subgroups
Stem cells under stress formed the focus of Saturday’s Doorstep Meeting, a more intimate gathering just prior to the kick off of the larger meeting. The 2018 ASCB Doorstep Meeting talks centered on the different challenging environments and conditions that stem cells encounter, especially with regard to tissue regeneration following injury or disease. Organized by Elaine Fuchs of Rockefeller University and Sean Morrison of the University of Texas Southwestern Medical Center, the meeting included discussions of many different types of stem cells—from muscle to skin to hepatic cells. Highlights included the lively roundtable discussions lead by each meeting speaker and the poster session that was so engaging that participants seemed to not want it to end. Along with the scheduled speakers, Lauren Goins, a postdoctoral scholar from the Uptal Banerjee laboratory at the University of California, Los Angeles, and Andres Lebensohn of the National Cancer Institute were selected to speak as top abstract submitters. ASCB’s Doorstep Meeting, which was limited to 200 participants, provided a great chance for early career researchers to pick the brains of their scientific heroes and mentors.

Member-organized Special Interest Subgroups also began on Saturday. They provide members a way to independently explore some of the most challenging and fascinating topics in cell biology. For example, organizers from the National Institutes of Health (NIH) and the Chan Zuckerberg Initiative led the discussion “Spatial and Temporal Analytical Tools for Cell Atlases” (see related story on the NIH Cell Atlas efforts on page 23). One speaker, Ana Pombo from the Max Delbrück Center for Molecular Medicine in Berlin, explained the development of an inexpensive method of genome architecture mapping that could be applied to challenging samples from the brain, embryos, or tissue biopsies.

“Building the Cell” was a highly multidisciplinary subgroup that focused on matters of basic cell assembly—or how a linear genetic code gets translated into structures that live and function in a 3D space. Eric Deeds from the University of Kansas used concepts from information theory to discuss how cells interpret their environment. With dense populations and a high degree of heterogeneity among cells, only a fraction of the information (signaling) can get through. Exceeding this cellular “bandwidth” can trigger apoptosis. Marija Zanic of Vanderbilt looked at the mechanisms involved in the dynamic instability of the microtubule network of the cytoskeleton, which ensures healthy, growing, and dividing cells. With tubulin available, microtubules form bundles and star-like “asters.” Zanic has been able to study aster formation artificially without the presence of tubulin with the use of streptavidin quantum-dots. 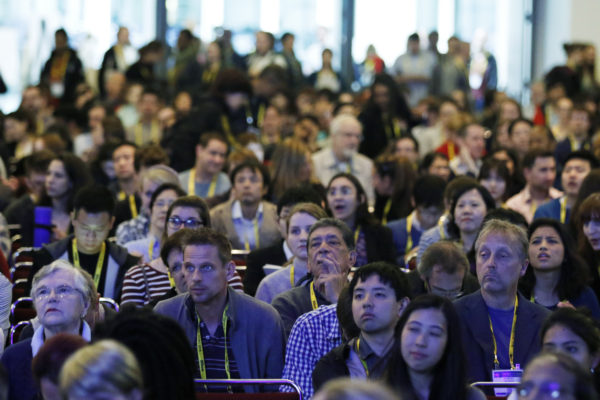 The crowd was packed and ready for Sean Morrison’s Keynote.

Welcome and Keynote Address
Saturday night, the crowds gathered in the main ballroom to hear the welcome speeches from ASCB President Jodi Nunnari, EMBO President Maria Leptin, ASCB CEO Erika Shugart, and Rockefeller University’s Elaine Fuchs. Nunnari and Leptin’s comments echoed one another as they remarked that, despite the trend toward nationalism worldwide, doing science has remained a collaborative effort. Shugart honored Ahna Skop from the University of Wisconsin, Madison, with ASCB’s inaugural Prize for Excellence in Inclusivity. And Fuchs announced the 2018 cohort of ASCB Fellows and introduced Keynote speaker Sean Morrison.
Morrison took the stage to describe his research using deep 3D imaging to map the locations and niches for all the hematopoietic stem cells within large segments of bone marrow. Better understanding stem cell niches and hematopoiesis is critical for helping patients who have had a bone injury or irradiation. A practical takeaway from his talk was that ascorbate deficiency is directly linked to leukemia initiation, so take your Vitamin C! 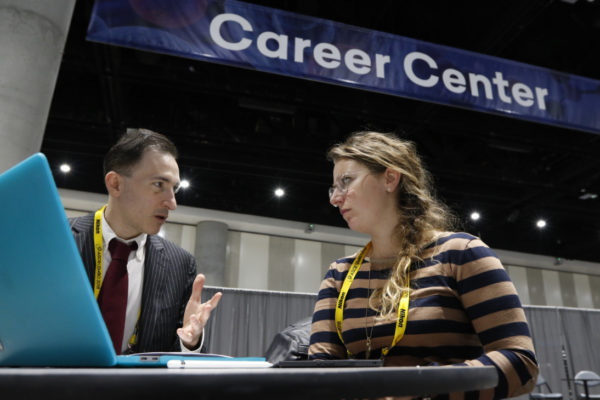 An attendee receiving immigration/visa advice from Marco Pignone of Getson and Schatz.

Back to Basics
Although Saturday’s subgroups are fascinating and the evening’s opening speeches and reception are inspiring, Sunday morning always feels like the actual official start of the meeting. This is the day when Symposia start, the Exhibit Hall opens, and the main poster sessions begin. Without a doubt, the core content of the ASCB|EMBO Meeting is about answering the fundamental questions of cell biology.
The Microsymposium “Cell Cycle and Signaling” featured a talk by Vinson Lam of the University of California, San Diego, on the ancient circadian rhythms of the cyanobacterium Synechococcus elongatus based on cryo-electron tomography to reconstruct the cell’s 3D architecture at different times of day or night. Jayson Smith from the State University of New York at Stony Brook spoke on the role that the SWI/SNF chromatin remodeling complex plays in invasive types of cells found in Caenorhabditis elegans. John Kuhn discussed his research that shows how, based on the number of microtubules bound to the kinetochore, the kinetochore can switch the spindle assembly checkpoint on or off during mitosis to help maintain genetic integrity.
The Minisymposium “Biology of Stem Cells” covered a wide array of challenging questions in this realm. Stephanie Grainger of the University of California, San Diego, described her work on Wnt gene ligands and Frizzled (Fzd) receptors. Although 19 Wnt ligands and 10 Fzd receptors have been identified in mammalian genes, no one knows exactly how they all work. Grainger’s lab used cells from humans and zebrafish to determine that an unusual Wnt9a and Fzd9b interaction signals for the development of hematopoietic stem and progenitor cells. Goosebumps were the theme of a talk given by Ya-Chieh Hsu of Harvard University. Hsu explained that the sympathetic nerves and arrector pili muscles responsible for this hair-raising response to chill also stimulate hair follicle stem cells through the release of the hormone norepinephrine.

Sunday night, members of ASCB’s Committee for Postdocs and Students ventured out in small groups to area watering holes for the “Ask a Scientist” bar night. One hundred t-shirts that read “I’m A Scientist, Ask Me About My Research” were distributed to participants who soon found themselves engaged in conversations with regular bar patrons about science and science-related topics. 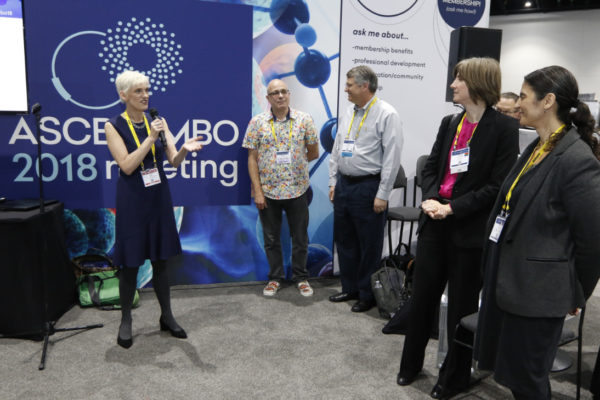 The Future Is Organoids
Monday’s Symposium “Regeneration and Morphogenesis” showcased fabulous illustrations and animations from the laboratory of Hans Clevers of the Hubrecht Institute. Clevers’ talk, “Stem Cell-Based Organoids as Avatars in Human Disease,” described “mini gut” organoids derived from mouse intestinal epithelial cells. Even more fascinating was a side project in his lab, where a student with an interest in snakes was able to produce functional snake venom gland organoids from stem cells. Later, Magdelena Zernicka-Goetz of the University of Cambridge discussed work in her laboratory building mouse and human embryos in vivo and in vitro that could provide invaluable insight into the early stages of human development and disease processes.
That same day ASCB released a white paper, Organoids: The Future of Life Science Research, with a press conference and panel discussion featuring members of the Society’s Organoid Task Force. The panel discussion addressed issues of reproducibility, the need for training, and the importance of educating the public and policymakers about the emerging field of research in cell biology. The organoid white paper can be downloaded from the ASCB website.
Continuing along the organoid theme, Stanford University’s Sergiu Pasca, winner of the ASCB Early Career Life Scientist Award, spoke about stem cell-derived human brain organoids developed in his lab that accurately recapitulate in 3D several specific regions of the brain. These “assembloids” can be connected to study cell-cell interactions and neuronal pathways. Studies on these cultures will provide new knowledge about neuropsychiatric disorders.

Monday afternoon also featured a workshop on cancer cell biology jointly hosted by ASCB and the National Cancer Institute. Among the talks given, Rosalie Sears from the Oregon Health and Science University shared new findings regarding the nuclear pore complex and how Myc oncogene activity is spatially regulated by the physical location of a cancer cell. Jan Lammerding from Cornell University demonstrated how the effect of deformation on the nucleus—tested by experiments that forced cells to squeeze through tight spaces in their environment—damages DNA and can increase metastasis.

Manuscripts, Movies, and Mechanics
Tuesday marked the formal announcement of a manuscript transfer network agreement among ASCB’s basic research journal Molecular Biology of the Cell, the Journal of Cell Biology, and the Journal of Cell Science (see p. 21). The chief editors from each journal gathered at the ASCB booth in the Exhibit Hall to describe the collaboration that will allow authors to seamlessly transfer their papers and peer-review reports among these community journals.

The 2018 Celldance videos premiered, featuring entertaining and informative works by filmmakers from the University of North Carolina, Chapel Hill, which explained the behavior of cells in groups versus as individuals, and from Ryerson University in Toronto, which compared the process of clathrin-mediated endocytosis to the movements of modern dance. Both videos, along with past Celldance videos, can be found on ASCB’s YouTube channel.

Also on Tuesday, the Microsymposium “Tissue Architecture and Mechanics” explored the poorly understood mechanisms that cells use to affect their surroundings. For example, David Li of Carnegie Mellon
University described some of the signaling pathways involved in the “conga-line” like migration behavior of cells, termed contact following locomotion, which accounts for cells moving in streams, sheets and clusters. Katherine Goodwin of Princeton University demonstrated the importance of smooth muscle differentiation for the proper geospatial development of mouse lung tissue into its stereotypical tree-like structures. 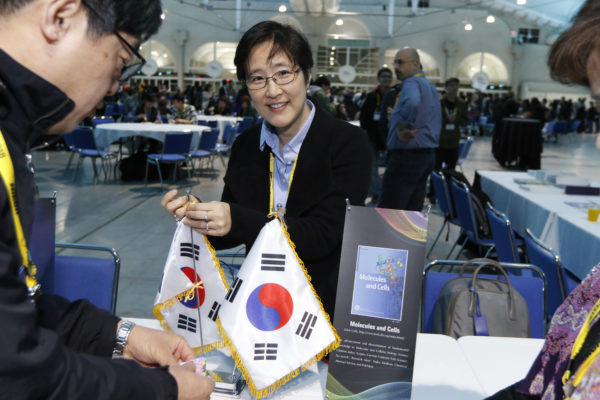 The International Training & Exchange Fair at the Opening Night Reception

New Model Organisms and Quality Control
Every day of the meeting was packed with exciting talks, workshops, and opportunities for networking, and Wednesday’s last half day of talks was no exception.
One of the final Special Interest Subgroup topics addressed the cell biology of marine protists as potential

new model organisms that can provide novel insights into the cell biology of eukaryotes. Elin Einarsson from Cambridge University described the challenges she’s faced trying to develop genetic tools to study the poorly understood marine parasite Perkinsus marinus. This organism resides at the evolutionary crossroads between dinoflagellates and apicomplexan parasites.

Quality control refers to the cell’s ability to correct its own genetic errors. This final meeting Symposium showcased the work of two of ASCB’s most well-respected researchers: Rachel Green of Johns Hopkins University and Peter Walter of the University of California, San Francisco. Ribosomes need to move, Green reminded her listeners, but sometimes, in response to stress, ribosomes get stuck. Her lab is looking at distinct molecular signatures created by “ribosome footprints” of different lengths and what these molecular markers can reveal about translational stress. Walter’s talk, “Targeting the Cell’s Stress Pathways for Therapeutic Benefit,” discussed how his lab is harnessing the power of the unfolded protein response for new therapeutic possibilities to treat cancer, as well as neurodegenerative and cognitive disorders. Walter astonished this writer with reports that a small-molecule inhibitor developed in his lab, called ISRIB, has the ability to rescue cognitive function in mice that had either had a traumatic brain injury or been engineered to be born with Down syndrome. Treated animals seemed to permanently regain and retain normal levels of cognitive function, performing well on maze and water tasks weeks and even months after treatment. The potential benefit to humans, if this research can make it into clinical trials, seems nothing short of miraculous.