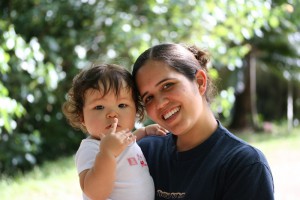 The nefarious impact of biomedical research budget cuts on the next generation of scientists has become a familiar theme of this blog. We are gingerly shooting ourselves in the foot! Recently, I found yet more chilling evidence in a report, issued by the Royal Society of Chemistry in the UK [1], which showed how these ill-conceived budget policies will affect young scientists, especially young women. For better or worse, that’s my theme again in this blog post.

The report from the prestigious Royal Society of Chemistry documents a significant drop by the third year of graduate school in the number of students who decide to pursue an academic career. Alas, this is a well studied phenomenon, also reported in an insightful paper by Cynthia Furhmann[2] published in the ASCB’s educational journal, Life Sciences Education. The most striking data is the breakdown by gender in the UK study of chemistry grad students. There, the proportion of men seeing their career in research drops from 61% to 59%, when compared to first year of grad school. And for women? The number tumbles from 72% to 37% with a whopping 22 point differential when compared to men. Ugh.

These numbers refer to a rigorous longitudinal study carried out in the UK on students only in one field. How general is the phenomenon? Unfortunately it seems general, at least in one dimension. Fuhrmann also demonstrates the drop in commitment to a career in research by third year graduate students (note that obtaining a PhD in the US normally takes longer than in the UK), although she does not observe statistically significant gender differences in the percent of men (27%) or women (28.9%) who select a non-research career path as their primary choice. The picture changes though when she looked at interest in becoming a PI in a research-intensive institution: 21.3 percent of women say they would chose this path, while 39.5 percent of men answered the question affirmatively, with a difference of 18.2 percent points. It appears that the concern is related to fully committing to a career centered essentially on research.

If we dig a little deeper in the demographics to understand what is driving these disturbing data, we find an interesting fact. A report by the liberal think tank, the Center for American Progress, finds that women in science who are married with children are 35% less likely to enter a tenure track position after receiving a PhD than married men with children. In addition, they are 27% less likely than their male counterparts to achieve tenure after entering a tenure-track job.[3]

So, is it family burden that does it?

Perhaps. Consider that single women without young children are roughly as successful as married men with children in attaining a tenure-track job, and a little more successful than married women with children in achieving tenure. That said, married women without children do not fare quite as well as men. Indeed, it seems that the greatest driver of this inconvenient truth is that for women, family life itself—both with and without children—accounts for a large part of the hemorrhage that we observe of talented women leaking out of the system. In particular, it is reported that research-intensive universities are the least family-friendly when compared with other possible career choices, including tenure-track careers at teaching-intensive institutions.

These are big differentials and they should worry us, and, by us I mean researchers (of both genders), universities, professional societies, and funding institutions. I speak as a husband of a wife with a highly demanding job and as the father of two young, beautiful, and close-to-perfect children who require a lot of attention (the opinion is clearly not peer-reviewed!). I have always made a strong commitment to share equally the family load with my wife. I saw many others around me in similar situations. As it often happens when we substitute anecdotal evidence for statistics, I was inclined to believe that the world was changing and that family duties would not be such a strong driver in career planning. Instead, there is still a lot we must do to change this situation.

I am really proud of our Society for its insights on so many fronts; in this area, we have a strong and very active Women in Cell Biology (WICB) committee, today under the capable leadership of Sandy Masur. Recently, in an email exchange with a friend who is the executive director of another international organization, my colleague recognized that her meeting features a (very) limited number of women speakers. Certainly, it is because of WICB’s constant attention to these issues that ASCB has achieved much more gender-balanced ratios at our scientific events. Just as an example, among other things, ASCB provides funding for childcare support for scientists attending the Annual Meeting. Recipients can use funds as they see fit —either paying for a baby sitter at home, bringing children to the Annual Meeting, or for whatever solution fits their need. This is a concrete and helpful way to make an important career event accessible to women—and for men—with family responsibilities. Given the data above, it seems it should help women the most.

But it is not enough to rest on our laurels. WICB and ASCB must keep attention on the issue of gender balance. We cannot lose the precious talent that women bring to the profession, to the lab, the lecture hall, and to scientific leadership. To pretend there is no problem is to willfully squander our most important national asset—human capital invested in innovation. We need to build on these data about the forces driving women out of academia and add to them our own analyses, specific to the field of cell biology and basic sciences. From there, we must propose solutions to research institutions and funding agencies, which must respond with innovative policy on this issue.

The time is over for feel-good policies that just cosmetically address the issue of family-friendliness in top academic institutions. Science is a very competitive, fast moving field but there is no reason why family-friendly policies are impossible in academia, especially when they are already working in industrial research and in other equally demanding professions. Saying that science is different is true, only in the sense that some in academic science are content with wasting valuable education, intelligence, and creative imagination because the bearer of these gifts is a woman. Ignoring the problem is not a long-term solution.

In my next blog, I will examine the issue of gender differences in performance for that small minority of trainees that remain in academic research positions. Women and men, stay tuned on the Activation Energy blog.

Dr. Stefano Bertuzzi is the Executive Director of the American Society for Cell Biology. In this position he is responsible, with the ASCB Board, for strategic planning and all operations at the Society to serve the needs of its ~9,000 members and to promote the field of cellular biology and basic science. Email: sbertuzzi@ascb.org