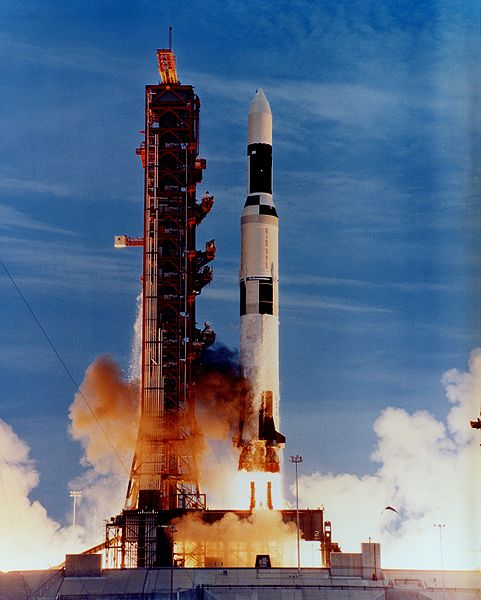 The UpGoer contest was inspired by the xkcd comic
describing the Saturn V rocket as the “Up Goer Five.”“I study tiny things that are man and woman parts of an animal. The woman part talks and the man part listens. The tiny things have a conversation so that they can find each other and make babies. Some man things are better at listening than others. I want to know if the man things that are better at listening are also better at making babies.”

These are the words I used to describe my research on the effect of sperm chemotaxis on reproductive success using only the 1000 most commonly used words, in a contest inspired by the xkcd comic describing the Saturn V rocket as the “Up Goer Five.”

When I first heard about the challenge, I tried and failed to describe my research without words like “chemical.” Frustrated, I asked a friend who works at a local hunger relief organization overseeing their federally funded afterschool and summer meal programs to describe her work with an “upgoer” statement and she immediately replied with “I feed hungry kids.” The purpose of the contest was suddenly clear: It isn’t useful to write the usual detailed description of our research and just replace the complex words with simpler ones, but it can be very useful to step back and evaluate our research from a broader perspective.

This isn’t a “dumbing down” of our research; to say that would do a disservice to both ourselves and our audience. We are just simplifying the description, looking at our research without the weight of excessive detail and jargon. For example, I could have spent a lot of time writing about the methods of my work by appending my statement with something about microfluidic channels and high-speed fluorescence videomicroscopy and fertilization assays, but does that really add anything for someone who isn’t in the same field or planning to do similar work? Our first instinct as scientists may be to include detail to accurately describe our work, but the detail that is helpful in a journal article often becomes an obstacle for general audiences.

The lessons from writing in upgoer language extend far beyond a contest. When we scientists explain our work to friends, family, out-of-field colleagues, and policymakers, perhaps we could take an upgoer approach and use simpler terms to describe what we do? After I sent my upgoer statement to my friend, she exclaimed that I finally explained it in a way that she could understand. And, this may be a bit of a reach, understanding something is one of the best ways to stop fearing it. Would the public start trusting scientists if they understood what we’re trying to do? Would GMOs, particle colliders, and in vitro meat be less controversial if the general public understood their form, function, and purpose?

What do you think? Check out other upgoer research statements from the contest and the wider scientific community, and submit your own upgoer research/work description in the comments!